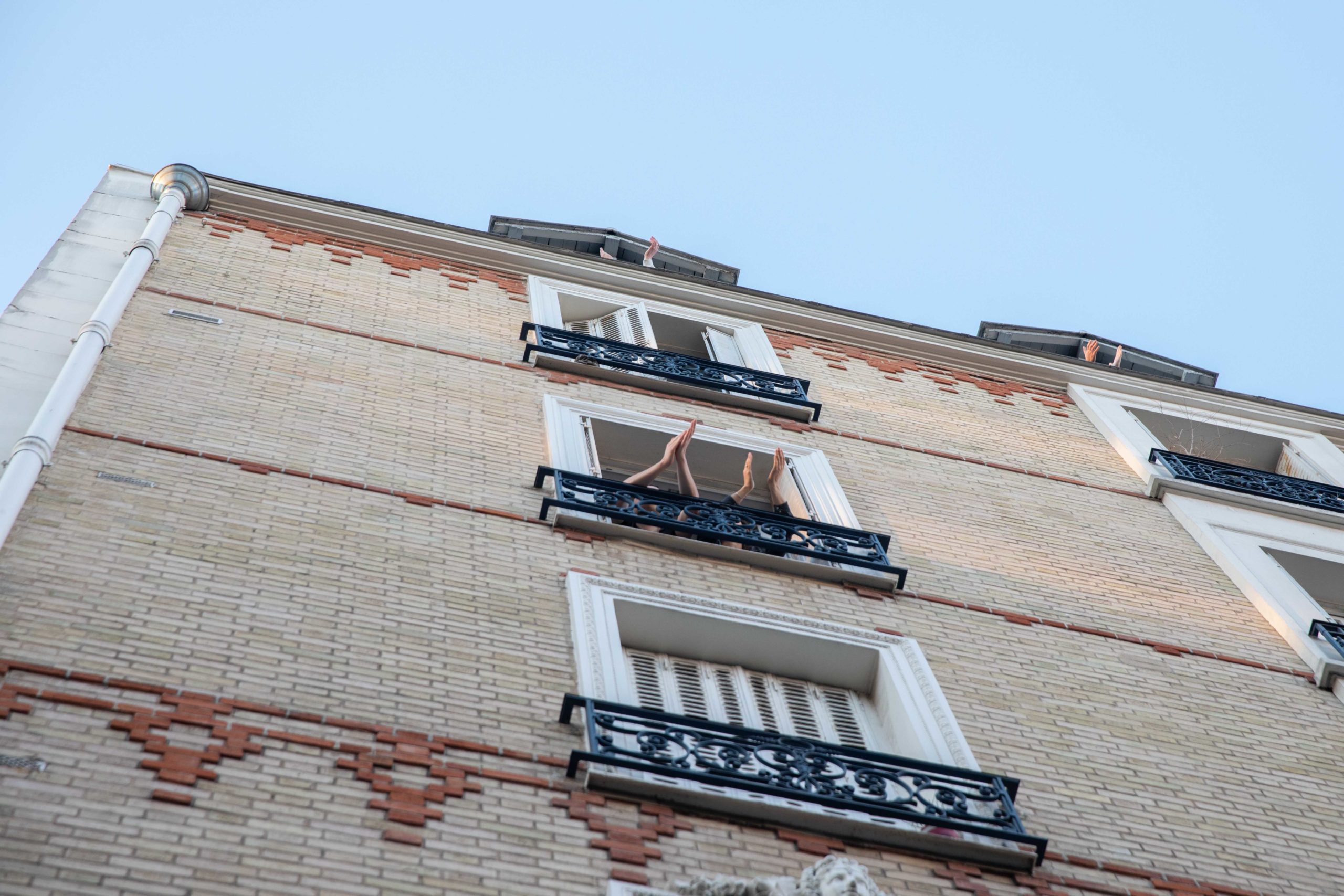 The pandemic has caused disruption around the world, but it could also be an opportunity to make some much needed social and environmental changes as countries try to adapt and recover from the crisis.

In the space of just a few months the world has seen drastic change. People who commuted to work and had vibrant social lives have found themselves confined to their homes. Entire industries have paused production and many businesses have shut their doors permanently.

The coronavirus pandemic has forced governments, only recently freed from the shackles of austerity, to borrow and spend billions to prop up their faltering economies. In the European Union, unemployment rates are now rising sharply from what had been a 12 year low.

The abrupt, precipitous drop in productivity has left many countries facing the worst economic downturn since the Great Depression some 90 years ago.

Yet there have been changes for the better too. Daily global greenhouse gas emissions fell by around 17% – and in some countries by an average of 26%  – at the peak of the lockdown. Other forms of pollution have also fallen leading to clearer, cleaner skies that could barely have been imagined prior to Covid-19.

Crime rates also dropped and many experts predict the pandemic could lead to long-term improvements in the way we work, such as greater flexibility by harnessing digital technologies. Scientists around the world have engaged in unprecedented levels of cooperation and information sharing as they work together to tackle the Covid-19 virus.

These dramatic shifts have fuelled hope that a more lasting transformation may emerge from the disruption caused by the pandemic. By harnessing the momentum of changes occurring and the will to take action, some experts believe it may be possible for European countries to shape fairer, more sustainable societies and economies as they recover from the coronavirus crisis.

‘Climate, innovation, digitalisation are the key words,’ said Dr Debora Revoltella, director of investment at the European Investment Bank, the lending arm of the European Union. ‘The challenge is to use the crisis to build a more competitive Europe, and to kick start a process to better internalise the effects of both digitalisation and climate change.’

She was speaking following the virtual launch of the Science, Research and Innovation Performance of the European Union (SRIP) report, which examined how research and innovation can contribute to social, economic and environmental goals of the EU and published when many countries in Europe were in lockdown and cases were beginning to peak. Among its conclusions were that while research and innovation will be at the core of the crisis response, it could also aid recovery in ways that will accelerate the transition to a more sustainable and resilient Europe.

This could include measures such as financial support packages for businesses to longer-term commitments to develop new technologies and make greater use of digital technology, says Dr Revoltella.

Financial bailouts from national governments and the EU should also come with green strings attached to push firms towards reducing their carbon dioxide emissions, she adds.

The European Council has already agreed a €750 billion recovery package of grants and loans that will be made available to EU Member States to financially support investments and reforms in green programmes, digital transitions and improving the resilience of national economies.

But there has been concern from scientists about how much of the EU’s €1.07 trillion budget over the next seven years – which was agreed as at the same time as the recovery package – will be put aside to support research itself.

A central element of the Covid-19 recovery strategy, however, is the European Green Deal – the roadmap for reducing greenhouse gas emissions and making the EU’s economy sustainable. By ensuring investments and loans are given to companies that are developing environmentally friendly technologies and solutions, it should help to reshape economies in a greener way as they emerge from the crisis.

‘Many of the technologies and innovations already exist such as electric vehicles and renewables,’ said Professor Frank Geels, an expert on system innovation and sustainability at the University of Manchester, in the UK, and one of the authors of the SRIP report. ‘So many people are pushing to use the recovery packages to stimulate both a move to be green and create jobs at the same time.’

One example he gives of how this could be done is within the housing market. Heating of residential homes is a major source of carbon emissions in Europe, so installing better insulation and heating systems into houses could provide both jobs and a reduction in CO2.

‘The majority of houses in Europe are terribly draughty and it is very labour intensive to install insulation everywhere,’ Prof. Geels said. ‘That is a big job. Since we are expecting a massive unemployment crisis in the coming years, there could be a lot of jobs to retrofit millions of homes with insulation and improve other infrastructure.’

Other major changes in infrastructure are going to be needed as transport systems move towards more electric-powered vehicles, including modernising the electricity grid and building charging stations and better storage capacity.

Dr Revoltella also sees governments’ policy response as crucial for how the future is shaped.

To help mostly small and medium-sized European companies through the economic crisis caused by the pandemic, the EIB has announced that it will be providing an additional €200 billion of financing.

‘Many people are pushing to use the recovery packages to stimulate both a move to be green and create jobs at the same time.’

Its own research has suggested that digital technology – which has played a huge role in allowing people to maintain social contacts and continue working through the lockdown – could be at a potential ‘tipping point’ due to the pandemic. It predicts that digitisation will become a crucial part of daily life and business.

And it has found that digital technologies, such as 5G mobile phone networks and the services that will grow around them, could make a significant contribution to reducing carbon emissions by reducing the need for travel and improving efficiency. There are also other things governments can be doing to help support the changes that need to happen beyond direct financial support, says Dr Revoltella.

‘We have seen that supporting energy audits of the firms leads firms to a much higher probability to invest in energy efficiency,’ she said. ‘Also, providing more information in terms of the advantage of digitalisation can lead to higher probability of investment.’

Pawel Świeboda, who also contributed to the SRIP report while he was deputy head of the European Commission’s European Political Strategy Centre (EPSC), believes it is important that new technologies and innovation become more ‘human-centric’ by focusing on changes in people’s wellbeing.

‘Their development will also need to have a more equitable impact on societal development, improving opportunities for all, rather than leading to the success of some,’ said Świeboda, who is now director general of the Human Brain Project.

He adds that the three most important areas for research and innovation will be those related to climate change, digital technology because this has the most potential to create value, and health issues linked to the ageing population, chronic diseases and new health emergencies, such as future pandemics.

But if the threat posed by the coronavirus fades as new treatments and vaccines emerge, will it be possible to keep the momentum of dramatic change going? After months of disruption, many people and businesses are eager to return to normality.

Prof. Geels sees an increasing tension between the large, multinational companies as they try to return to the old status quo and those that are pushing for greener economies.

‘There is a lot of wishful thinking about this being the time for solutions to be advanced, but I think we are going to see major struggles about how the future will play out,’ he said. Many of the big fossil fuel companies have been hard hit, Prof. Geels says.

‘Aeroplanes are not flying, cars are not being sold, the oil price has dropped massively. But, of course, they are still huge and powerful companies which are lobbying very hard and getting a lot of the bail-out money,’ he said.

But rather than a David and Goliath battle between the large, traditional companies and the new, smaller start-ups developing sustainable technologies, Prof. Geels envisages an opportunity for more collaboration between the two.

‘It is about getting things onto the market and into people’s homes,’ he said. Whereas start-ups are good at innovation, the established companies, he says, have the finances, political muscle and ability to work at scale. He wants to see more collaborations such as the European Battery Alliance, set up the European Commission, that brings together new businesses and car companies.

‘They are also thinking of setting up a Clean Hydrogen Alliance, which could also potentially have oil companies in there. It is about finding a balance,’ he said.

Part of this process will also be to ensure that governments support industries and businesses that their populations want them to. In many cases, however, the answer involves tricky moral questions. Health authorities and governments in Europe and around the world, for example, have faced emotionally charged dilemmas in the Covid-19 crisis while trying to decide how much to spend on various interventions and treatments during the pandemic.

Professor Caspar Chorus, who researches choice behaviour modelling at Delft University of Technology, in the Netherlands and coordinates the BEHAVE project, has been studying how to turn these difficult moral choices into mathematical models that combine behavioural science and philosophy into a format that economists can use to make decisions.

The technique asks participants to make dozens of these morally difficult choices, and when they are analysed can provide insights into the public preference.

‘Mathematically we were able to obtain what we call a utility function – you can think of this as a goal function that encapsulates the different effects of a policy and attaches weight to each effect. People are very poor at explaining those weights themselves, but we can learn these from the choices they make.’

His work is already helping to inform the Dutch government about some of the tricky decisions they have faced with regard to the pandemic.

But it has also revealed one approach governments might take if they are hoping to bring about long lasting transformations. ‘People have some deep-seated moral values, which can be quite different from the moral actions they take,’ said Prof. Chorus. ‘Most governments think that if you can alter people’s attitudes then you will ultimately alter their behaviour – so if you convince people of a moral value like cycling is better for the environment, for example, then they will take a moral action and cycle more.

‘We have found from our research that this approach is much weaker than the other way around. If people have to start cycling because of an external factor like public transport stops running, like it did in the pandemic, then they (may) discover they like it and are more likely to stick with it. (This effect) is much stronger than an information campaign.’

He believes that this lesson could prove useful for governments hoping to use the pandemic to transform their economies and societies for the better. The pandemic has offered a period of intense disruption, which if harnessed could lead to lasting long-term change.

‘The key is to establish the right behaviours,’ said Prof. Chorus.