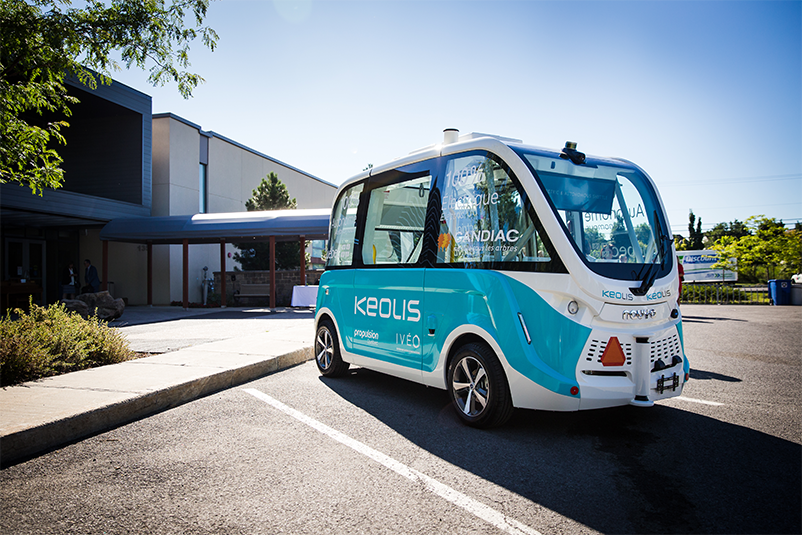 In the zero-carbon cities of the future, commuting to work may take the form of hailing a driverless shuttle through an app which ferries you from your door to the nearest public transport terminal. In fact, autonomous shuttles have been in development in restricted areas for the past few years. So what will it take to make them part of our daily commute?

Jutting out into the sea, the industrial port area of Nordhavn in Denmark’s capital, Copenhagen, is currently being transformed into a futuristic waterfront city district made up of small islets. It’s billed as Scandinavia’s largest metropolitan development project and, when complete, will have living space for 40,000 people and workspace for another 40,000.

At the moment, Nordhavn is only served by a nearby S-train station and bus stops located near the station. There are no buses or trains running within the development area, although there are plans for an elevated metro line, and parking will be discouraged in the new neighbourhood. This is a great opportunity for autonomous vehicles (AVs) to operate as a new public transport solution, connecting this area more efficiently, says Professor Dimitri Konstantas at the University of Geneva in Switzerland.

‘We believe that AVs will become the new form of transport in Europe,’ he said. ‘We want to prove that autonomous vehicles are a sustainable, viable and environmental solution for urban and suburban public transportation.’

Prof. Konstantas is coordinating a project called AVENUE, which aims to do this in four European cities. In Nordhavn, the team plans to roll out autonomous shuttles on a loop with six stops around the seafront. They hope to have them up and running in two years. But once in place, the Nordhavn plan may provide a glimpse of how AV-based public transportation systems could work in the future.

Prof. Konstantas envisages these eventually becoming an on-demand, door-to-door service, where people can get picked up and go where they want rather than predetermined itineraries and bus stops.

In Nordhavn, AVENUE will test and implement an autonomous ‘mobility cloud’, currently under development, to link the shuttles with existing public transport, such as the nearby train station. An on-demand service will ultimately allow passengers to access the available transport with a single app, says Prof. Konstantas.

Integrating autonomous shuttles into the wider transport system is vital if they are to take off, says Guido Di Pasquale from the International Association of Public Transport (UITP) in Brussels, Belgium.

‘Autonomous vehicles have to be deployed as fleets of shared vehicles, fully integrated and complementing public transport,’ he said. ‘This is the only way we can ensure a sustainable usage of AVs in terms of space occupancy, traffic congestion and the environment.’

Di Pasquale points to a concept known as Mobility-as-a-Service (MaaS) as a possible model for future transport systems. This model combines both public and private transport. It allows users to create, manage and pay trips as a single service with an online account. For example, Uber, UbiGo in Sweden and Transport for Greater Manchester in the UK are exploring MaaS to enable users to get from one destination to another by combining transport and booking it as one trip, depending on their preferred option based on cost, time and convenience.

Di Pasquale coordinates a project called SHOW, which aims to deploy more than 70 automated vehicles in 21 European cities to assess how they can best be integrated with different wider transport systems and diverse users’ needs. They are testing combinations of AV types, from shuttles to cars and buses, in real-life conditions over the next four years. During this time, he expects the project’s AVs to transport more than 1,500,000 people and 350,000 containers of goods. ‘SHOW will be the biggest ever showcase and living lab for AV fleets,’ he said.

He says that most of the cities involved have tested autonomous last-mile vehicles in the past and are keen to include them in their future sustainable urban mobility plans.

However, rolling out AVs requires overcoming city-specific challenges, such as demonstrating safety.

‘Safety and security risks have restricted the urban use of AVs to dedicated lanes and low speed — typically below 20km/h,’ explained Di Pasquale. ‘This strongly diminishes their usefulness and efficiency, as in most city environments there is a lack of space and a high cost to keep or build such dedicated lanes.’

It could also deter users. ‘For most people, a speed barely faster than walking is not an attractive solution,’ he said.

‘We want to prove that autonomous vehicles are a sustainable, viable and environmental solution for urban and suburban public transportation.’

Each city participating in SHOW will use autonomous vehicles in various settings, including mixed and dedicated lanes, at various speeds and types of weather. For safety and regulation reasons, all of them will have a driver present.

The objective is to make the vehicle fully autonomous without the need for a driver as well as optimise the service to encourage people to make the shift from ownership of cars to shared services, according to Di Pasquale. ‘This would also make on-demand and last-mile services sustainable in less densely populated areas or rural areas,’ he said.

But the technical issues of making the vehicle autonomous are only a part of the challenge.

There’s also the issue of who pays for it, says Di Pasquale. ‘AVs require sensors onboard, as well as adaptations to the physical and digital infrastructure to be deployed,’ he explained. ‘Their market deployment would require cities to drastically renew their fleets and infrastructures.’

SHOW’s pilots are scheduled to start in two years from now, as each city has to prepare by obtaining the necessary permits and getting the vehicles and technology ready, says Di Pasquale.

Getting authorisation to operate in cities is one of the biggest hurdles. City laws and regulations differ everywhere, says Prof. Konstantas.

AVENUE is still awaiting city licences to test in Nordhavn, despite a national law being passed on 1 July 2017 allowing for AVs to be tested in public areas. Currently, they have pilots taking place in Lyon, France and Luxembourg. In Geneva, the team has managed to get the required licences and the first worldwide on-demand, AV public transportation service will be rolled out on a 69-bus-stop circuit this summer.

AVENUE’s initial results show that cities need to make substantial investments to deploy AVs and to benefit from this technology. The legal and regulatory framework in Europe will also need to be adapted for smooth deployment of services, says Prof. Konstantas.

Both he and Di Pasquale hope their work can pave the way to convince operators and authorities to invest in fleets across Europe’s cities.

‘Depending on the willingness of public authorities, this can take up to four years until we see real, commercially sustainable AV-based public transportation services on a large scale in Europe,’ said Prof. Konstantas.