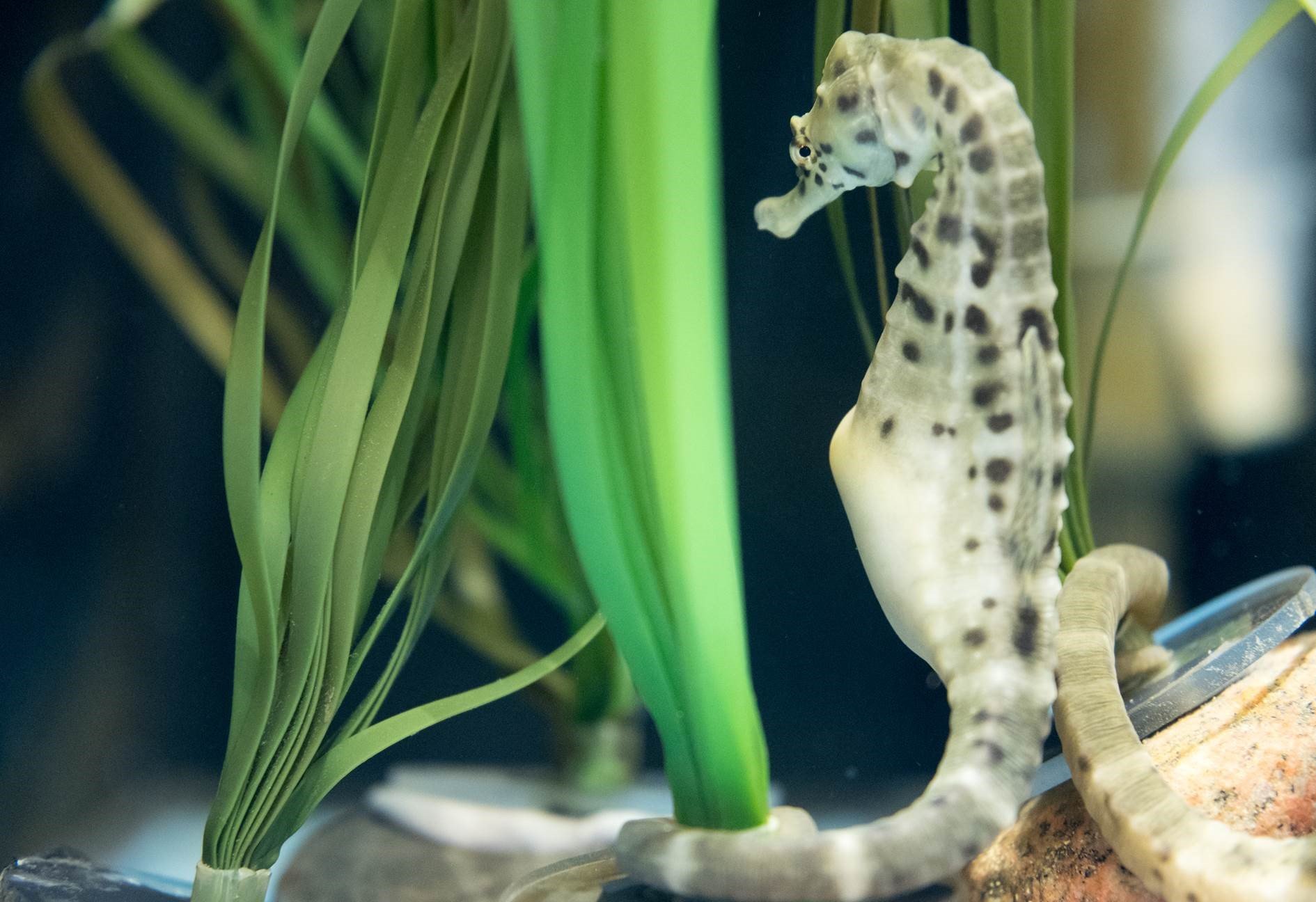 Male seahorses not only become pregnant and give birth, but do so in ways that take different forms, which make them unique research subjects to understand the evolution of pregnancy, according to Dr Olivia Roth from the Helmholtz Centre for Ocean Research Kiel (GEOMAR) in Germany.

She is studying three of the different types of pregnancy in syngnathids, a fish family including seahorses, pipefish and seadragons as part of a project called MALEPREG. One type is when eggs are glued to the body of the male, who then carries them; the second is full male pregnancy, with transfer of nutrients and oxygen in a placenta-like system – including one in which a pouch closes with a skin fold upon egg deposition; and the third is similar to the second but with a closed pouch.

Beyond the novelty value, what is so interesting about studying male pregnancy?

‘When it’s a normal pregnancy system, egg production and pregnancy all intermingle with the mother, so it’s very difficult to differentiate what happens during egg development and pregnancy.

‘(Another) reason is that when we want to understand the evolution of a trait, when we only have the absence or presence of this trait then it’s very difficult to study how it has evolved. In syngnathids, what we have is that male pregnancy has evolved on a gradient – so we have closely related species that do display different forms.

‘If we compare those, then we can understand, “OK, these genes have (provided) the function for this and this, and now this has happened”.’

What exactly are you looking at?

‘One of the main issues we’re studying is the problem of the immune system. If you accept a non-self embryo – because half is from the father and half from the mother – in your body, then your body would in principle (reject it). (So for pregnancy to evolve), somehow this rejection has to be circumvented.

‘In mammalians, (certain immune system) genes are downregulated (during pregnancy) – this is why we see that pregnant individuals are often sick. Then there are specific adaptations in the placenta that prevent the rejection of this non-self tissue. We are studying this in syngnathids.

‘We are doing a comparative genomics approach, so we have sequenced genomes of these different (syngnathid) forms. What we have found is that those genes are lost (in syngnathids with a part-closed pouch and changed in those with a closed one). So one arm of the immune system that’s really important for vertebrates is (functionally) entirely lost.’

What are the implications of that finding?

‘Our hypothesis is that this has permitted the evolution of male pregnancy.

‘When we look at fishes, in general, the parental investment strategies are completely different from humans – males have a more important role. For the syngnathids, the problem is that they don’t have a stomach, so they have to feed more or less permanently. They are always hunting food. So probably that’s why they started to carry (their eggs) with them.

‘When we look at those species that are only carrying these embryos with them on the belly, those still have a (fully) functional immune system. Only with the evolution of this placenta-like structure – full male pregnancy – is this part of the immune system lost. Potentially, this (loss) has permitted this extreme evolution.

‘(Also), we have (here) a system that basically is immunologically deficient. (This) can ultimately help human medicine, because there are so many immunodeficiency diseases (such as HIV) and we are not able to cope with them. (It suggests that there’s) a lot more flexibility in the adaptive immune system or in the evolution of adaptive immunity than we thought earlier.’

What else have you found so far?

‘We did transplant experiments to understand better this self/non-self recognition. We transplanted fins (tissue) of the syngnathids to the belly of (themselves and others) to see if they rejected it or not and what we have found there is that those that have lost parts of their immune system are a lot better-accepting of non-self tissues.

‘We compared (syngnathid pregnancy) genes to the mammalian pregnancy genes, and we actually do find that these are genes from the very same pathways: similar genes have been co-opted in their function towards pregnancy.

‘(This) suggests that there are not probably so many options in what things have to be changed in their functions (to allow pregnancy). It doesn’t really give us an idea of why (pregnancy) has evolved, but more that convergent evolution can come with a similar mechanistic basic.’

What are you looking at next?

‘Now we know which genes might be involved (in the evolution of male pregnancy), but we don’t know their function yet. The next step will be to (definitively) identify these.

‘Then we can study how (these genes) have evolved across the phylogeny (family tree of organisms) and see, for example, where there are mutations involved. We know that in (male) pregnancy they seem to have a role, but not if this is the same function as they have in female pregnancy.

‘We’re (also) working on all the microbiota involved (in syngnathids’ brood pouches). We’ve cultivated these microbes and now we’re going to deplete all the microbes on the male side and then add them again to see what their function is, to really understand this co-evolution of pregnancy with the immune system, but also with these microbes.

‘(With parts of the immune system lost, we’re studying in addition) how is it possible that these fishes can survive and fight against diseases? And what kinds of compensatory mechanisms might they have?’

What wider lessons can we draw from studying male pregnancy in syngnathids?

‘In reproduction, I think we still (often) have the understanding that males are the ones giving the sperm and they don’t then have a big function in parental investment. But we know now in terms of epigenetics (gene expression) that fathers are providing a lot more than just the sperm.

‘In the syngnathids, we really have the chance to see, “OK, the males have this and this function”. There are so many classical perceptions about how males have to behave and how females have to behave, (but it may not always be the case). We should really go beyond model systems. When we are driven to go and look at these weird creatures, we can (better) understand nature.’