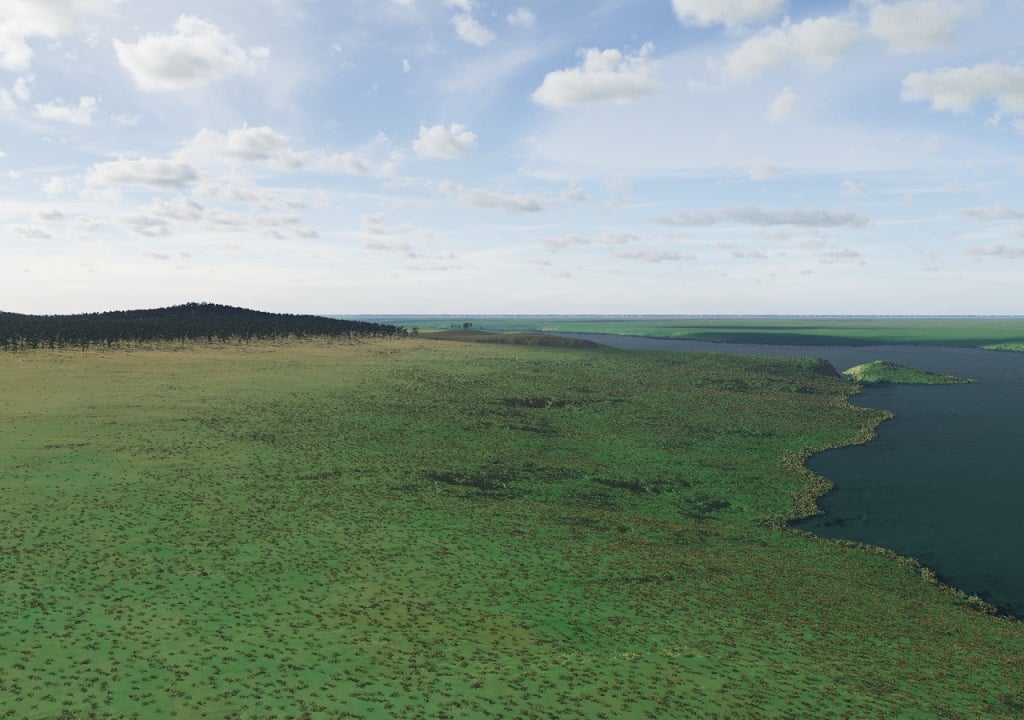 Traces of long-forgotten human settlements claimed by the sea thousands of years ago are being uncovered by researchers along the coastlines of Europe.

The discoveries, both on land and underwater, are helping to fill in some of the blanks about Europe’s prehistory and are offering insights into how our species responded to global climate change in the past.

Around 8,500 years ago, after the end of the last ice age, global warming triggered huge rises in sea levels due to the melting of glaciers and ice sheets that had covered much of the northern hemisphere.

An area of land twice the size of the European Union was lost to the rising seas, prompting mass migration across the continents.

Much of the human experience of this cataclysm, however, has remained buried out of reach of even the most assiduous investigator, leaving a huge gap in the story of our ancestors.

But now an unprecedented alliance of geologists, archaeologists and computer scientists are moving land and sea in an attempt to uncover this forgotten past.

One of the major problems facing archaeologists reconstructing details of past human settlements is that the records are often jumbled. Subsequent human construction and farming activities shuffle the earth and scramble the chronology of events that they record.

But one area in Europe has remained undisturbed by human hands for millennia. Yet, at one time it may have bustled with human activity and may even have been a cultural hotspot, according to Professor Vincent Gaffney, an archaeologist at the University of Bradford in the UK.

‘At the time, it must have been the best place to live,’ said Prof. Gaffney. ‘There was water, birds, fish. We are talking about an area so large that entire societies could have thrived.’

This place is now known as Doggerland. At the height of the last ice age, sea levels dropped so low that humans could walk across a land bridge from the British Isles and Scandinavia to continental Europe.

When the ice melted, the plains were flooded by the rising North Sea, which took any trace of local inhabitants with it.

Fishermen still occasionally recover stone tools and bones off the coasts that encircle the North Sea, but there have been no sightings of human settlements under the open sea. Research ships attempt to survey and take core samples from the seabed, but it is expensive, and no one knows precisely where to look.

But now, as part of the Lost Frontiers project, Prof. Gaffney is starting to narrow down this search. He and his colleagues are mapping the likely whereabouts of bygone populations by building 3D models of Doggerland’s sunken topography and identifying where fresh water once flowed.

Dr David Garcia Moreno, a geologist at the Flanders Marine Institute in Ostend, Belgium, says that enigmatic depressions and valleys at the bottom of the North Sea are likely to have been carved by ancient lakes and rivers. These can give clues about the likely places where ancient humans would have lived.

Earlier this year, Dr Garcia Moreno used sonar equipment on board the research vessel Belgica to conduct a geographical survey of the sea floor and to collect sediment core samples. Oil and gas prospectors also donated a trove of additional sonar data to the project.

Working with colleagues from Ghent University and the Lost Frontiers team, Dr Garcia Moreno has been able to map the distribution of these ancient water features in Doggerland.

Their measurements are now feeding into digital models of the sediment layers that form vast expanses of the seabed. Core samples recovered on expeditions like those on the Belgica are helping computer scientists on the project to validate their simulations.

Prof. Gaffney says that underwater sediments also conserve breathtaking details about the Neolithic environment. By sequencing ancient DNA in these samples, his team has been able to piece together the diversity of woodland, meadows, marshes, bacteria and animals that once thrived in Doggerland. He hopes that undersea cores will soon reveal signs of human activity such as ash or even crops. Human evolution and history have strong links to shorelines, he says.

‘Ideas and innovation have often been introduced or spread along the coast,’ said Prof. Gaffney. Given the dramatic reshaping of Europe’s contours at this crucial moment in history, important transitions in the human story, such as the adoption of agriculture and the construction of permanent settlements, may have been first adopted in coastal areas that later sank beneath the sea.

Further south, on the Mediterranean coastline, scientists are also examining the coastal landscape to search for signs of lost human settlements.

Dr Elodie Brisset, a palaeogeologist at the Catalan Institute of Human Paleoecology and Social Evolution (IPHES) in Tarragona, Spain, has been digging out 15-metre cores of sediments from an area close to the Spanish coast. Looking at the shape and chemical composition of the grains in the sediment reveals how conditions at the site have changed over the millennia.

‘Fine-grain sand and shell debris indicate that this place used to be underwater,’ said Dr Brisset.

As part of a project called MedCoRes, she is charting the shifts in the environment that transformed life during the Stone Age along the Spanish coast.

‘It is sobering to think that the rate of the rise in sea levels then was similar to that predicted for contemporary climate change.’

Dr Brisset is one of a growing number of geologists working in archaeology institutes. She says that advances in the resolution of radiocarbon dating now make it possible for rock specialists to investigate prehistoric events alongside anthropologists and to share insight from complementary standpoints.

The Spanish cores excavated by Dr Brisset confirm archaeological evidence that an ancient coastal lake once sustained large human settlements in the region. When sea levels rose, the lake shrank as its waters drained away across the receding shoreline, squeezing food resources and driving people inland.

‘Sediments from this site record how changes in the environment transformed living conditions for an entire community,’ said Dr Brisset.

The gentle slope of the seabed beneath some parts of the North Sea also suggests the loss of land at the end of the last ice age may occasionally have been dramatic, with many kilometres of plains vanishing in a single year. Prof. Gaffney says that these events may have provoked intense competition among local inhabitants, with massive shifts in population and even violence.

Uncovering these stories, which are now thousands of years old, could offer some clues about what our own future holds too.

‘It is sobering to think that the rate of the rise in sea levels then was similar to that predicted for contemporary climate change,’ said Prof. Gaffney. As humans prepare for environmental impacts in the 21st century, he says that the only place to look into the future is the past.