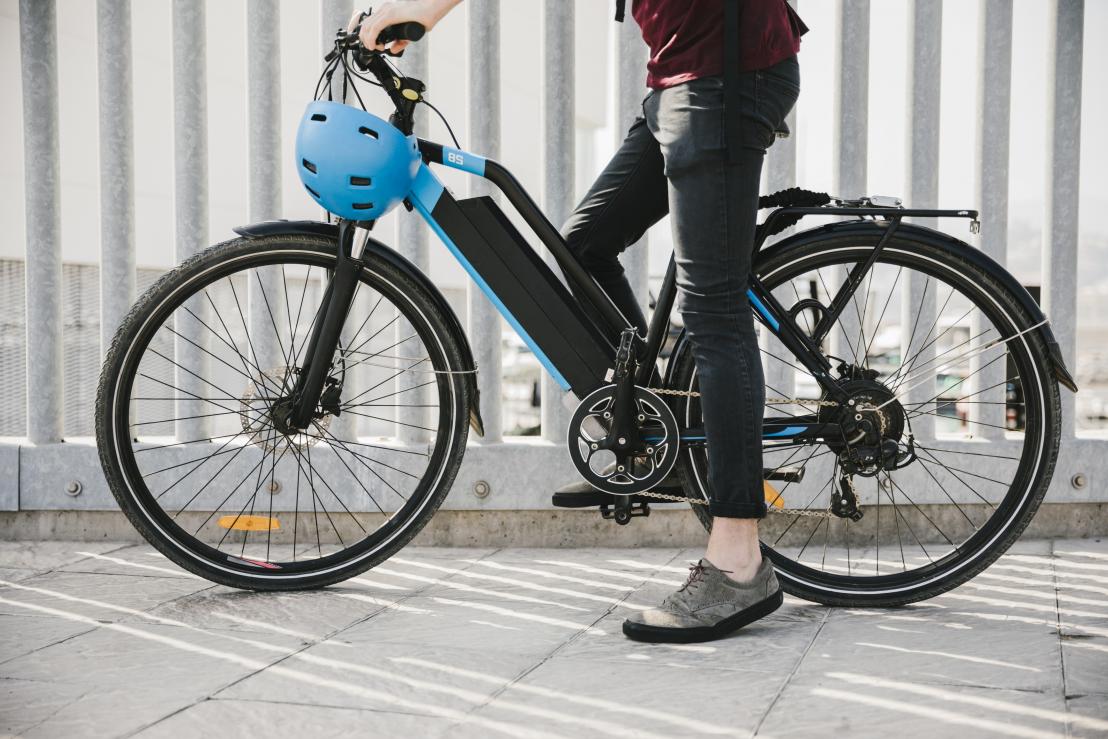 If Europe is to meet its ambitious environmental goal of becoming carbon neutral by 2050, more and more people will need to cycle to get around. With World Bicycle Day on June 3rd celebrating pedal power’s undeniable benefits, we are curious to know what the bike and e-bike of the future might look like.

Since the start of the pandemic, e-bikes have propelled a bicycle sales boom. Already in 2019, more than 3.7-million of the battery-powered e-bikes were sold with EU sales projected to reach 17 million units annually by 2030, according to the European Cyclists’ Federation.

Apart from the widespread adoption of electric power, at over 200 years of age, the ancient pushbike itself is enjoying something of a makeover. Innovations for safer braking, easier pedalling and better grip in changing road and weather conditions soon may be coming to an upgraded bicycle lane near you, thanks in part to €80 billion in sustainable transport infrastructure investments under the European Green Deal. 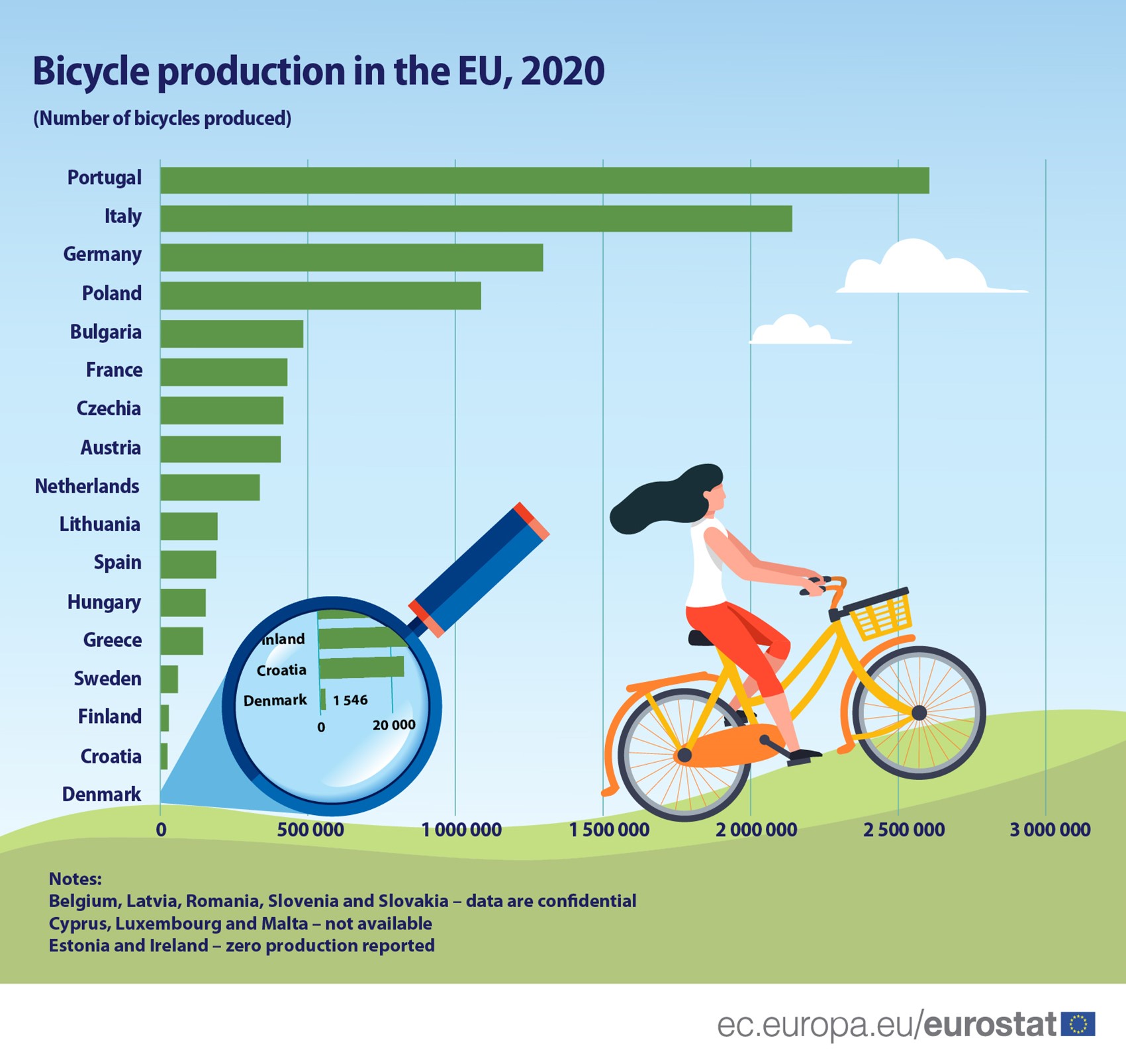 Production of bicycles in the EU in 2020 © Eurostat

One unfortunate drawback to this cycling revolution is, as e-bikes sales increase, so too do e-bike-related injuries. ‘E-bikes are light vehicles and have small brakes, so the pressure applied to them is significantly high,’ said Fabio Todeschini, founder and general manager of BluBrake. Based in Italy, BluBrake designs and manufactures anti-lock braking systems (ABS) for e-bikes and e-cargo bikes.

The majority of e-bike accidents occur during braking, with about 40% of those accidents due to the front wheel locking, said Todeschini. When the wheel locks, the cyclist can skid without control, overturn or worse, fly over the front of the handlebars. BluBrake developed a brake-set solution to make e-bikes safer, providing cyclists with safety technology similar to cars and motorcycles.

A sensor on the front wheel measures the bicycle’s speed and transmits that information to the main ABS unit, which is the brains of the system. A handlebar display keeps the cyclist informed of the status while electronics are used to monitor speed and predict potential danger. If a dangerous situation arises, an actuator engages to regulate pressure on the front brake in order to prevent the back wheel from lifting off the ground.

Since the company launched its ABS offering in 2019, a number of leading original equipment manufacturers (OEMs) have adopted it as standard on their bike models, Todeschini said. In 2021, BluBrake launched its second-generation ABS, which, at under 400g, is half the size and weight of the original.

Norwegian firm reTyre produces a modular tyre system with a range of treads, that can be changed easily by zipping them on and off.

‘It started when I was a student at the Norwegian University of Science and Technology,’ said reTyre founder and inventor Paul Magne Amundsen. ‘You can find almost 20 000 bicycles on campus (but) in the winter almost none of them had winter tyres.’ In frosty Norway, these tyres are vital because they improve traction and allow the bikes to grip the road, even in the icy conditions that sometimes prevail.

‘We realised that we needed to make some kind of studded winter surface that mimics a tyre, looks like a tyre, but is easy to take on and off,’ Amundsen said. Ultimately, Amundsen and colleagues ended up designing a modular tyre, consisting of a base tyre with a zipper to which can be fitted with different layers or “skins”, chosen according to weather conditions. ‘When you want to attach a new skin to the tyre, you slip on your surface layer,’ said Amundsen, ‘And that surface sits very snugly on the tyre, so you have the performance that you’d expect from a normal tyre.’

‘When a surface layer is worn, you’re only discarding the surface layer instead of the whole structure,’ he said. Making it easy to switch tyres also increases the likelihood that people will use their bikes more, as they could otherwise be put off bringing their bicycles into the shop to have other tyres fitted.

The company is rapidly expanding to keep up with demand. Last year, reTyre produced about 40 000 modular tyre systems, and now plans significant increases. ‘We’re looking at 100 000 this year,’ said Amundsen. 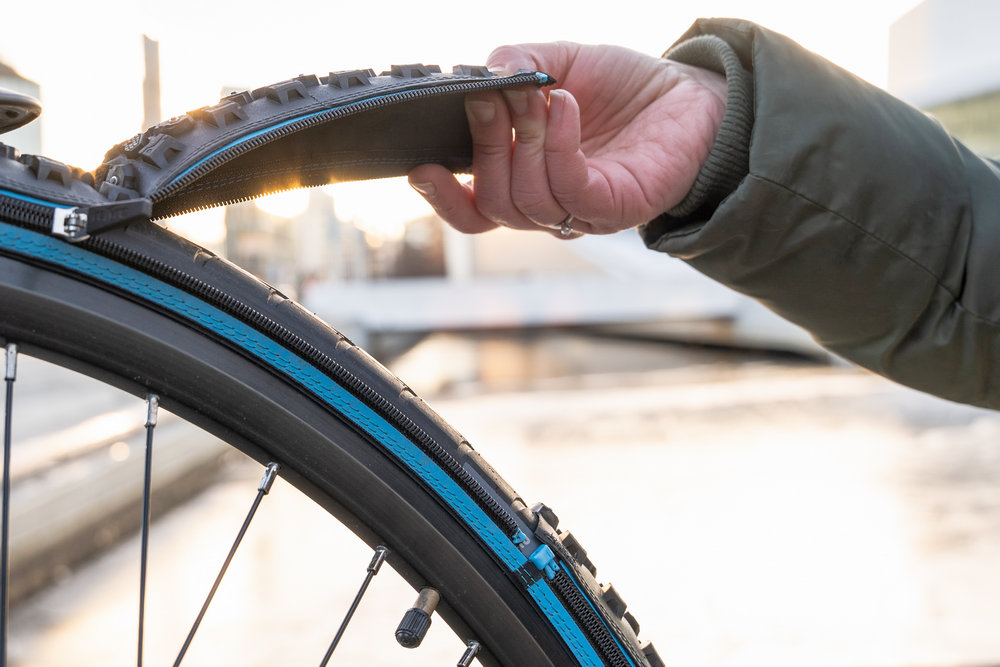 Some people may find the physical effort of cycling deters them. It’s a reticence that Spanish company Bike Innovations is addressing with the manufacture of extending cranks which significantly reduces the effort required to move the bike. The cranks are the metal rods that links the pedals to the large chain wheel which ultimately powers the rear wheel. Bike Innovation’s Raylap project developed springy cranks which extend in length as a person is cycling.

These increase the circumference of the circle that the cyclist creates when turning the pedals, improving the rate at which force is transferred to the rear wheel by up to 35%, according to Bike Innovations. Demanding much less effort from the rider, the cranks can be fitted to any bicycle. In e-bikes, spare energy can even be fed back into the battery.

‘We are about to manufacture the first 200 products,’ said Juan Gazpio, sales manager at Bike Innovations. Initial feedback is promising, according to Gazpio, and following trials with cycling retail outlets in Madrid and Barcelona they are planning to ramp up manufacturing ahead of Christmas 2022.