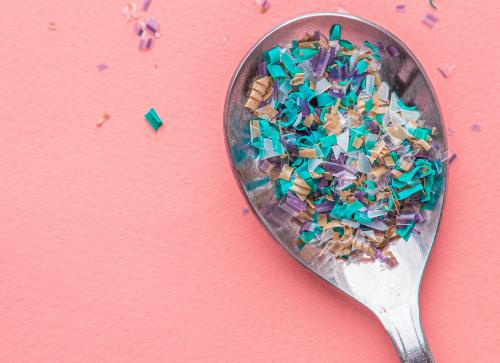 Scientists have found minuscule shreds of plastic everywhere – in rivers and lakes, at the bottom of the sea, on the tallest mountain on earth, blowing in the wind and moving through our food chain. Now they’re trying to find out how all this plastic is affecting human health.
Plastic pollution is everywhere we look. Plastic bottles, bags and containers, toothbrushes, tires and electronics litter coastlines, float in the sea and clog landfill sites. What about the plastic waste we can’t see?

When the plastic litter in our waterways and on the ground gets weathered and degrades, it eventually breaks down into millions of smaller and smaller pieces. Plastic specks smaller than five millimetres are called microplastics. Nanoplastics are even smaller (some are 500 times smaller than a human hair). While exposure to air pollutants have been associated with health impacts, including higher risk of respiratory infections, heart disease and lung cancer, science still lacks evidence about how microplastics and nanoplastics are affecting the human body.

In 2019, the World Health Organization (WHO) published its first report on the effects of microplastics on human health. It concluded that there is not enough data yet on humans to know if microplastic particles are hurting us. The WHO called for more research into microplastics.

That’s exactly what is being done in laboratories across Europe. Spearheading efforts in research on micro- and nanoplastics (MNPs), the European Research Cluster to Understand the Health Impacts of Micro- and Nanoplastics (CUSP cluster) was formed in April 2021 by five multidisciplinary research consortia: AURORA, Imptox, PLASTICHEAL, PlasticsFatE and POLYRISK.

At the moment we have very limited data on exposures and risks, which makes risk management a challenging task.

This consortium of scientists, industry and policymakers are collaborating in the largest effort so far in Europe to uncover the complex relationship between MNPs and human health, from early life to adulthood.

‘All five projects are working towards the same direction in terms of providing solid scientific evidence and data to inform the risk managers in Europe and elsewhere about potential risks,’ said Professor Tanja Cirkovic Veličković who is Coordinator of Imptox and oversees the CUSP cluster in the first year of its implementation. ‘At the moment we have a very limited data on exposures and risks, which makes risk management a challenging task. The European Commission has initiated steps to address this important science policy issue.

The aim of CUSP is to provide the scientific data risk managers need to decide what kinds of actions could be needed to protect humans and the environment from potential adverse effects. Currently, there is no single European law that covers microplastics in a comprehensive manner. The timing is perfect. The EU is planning an upcoming initiative on microplastics, with a public consultation slated to launch this year.

Based on the work undertaken, risk assessments will be carried out to identify the potential hazards and provide evidence to strategies and policies for better prevention and response. According to Roel Vermeulen, Professor of Environmental Epidemiology and Exposome Science and Director of the Institute for Risk Assessment Sciences at Utrecht University, the Netherlands, it’s time to map existing regulations and conduct the right experiments and research to identify the gaps and find ways to fill them.

‘Understanding the potential gaps in current particle and chemical risk assessment with respect to MNPs and early life health is what we’ve been working on during our first year,’ said Prof. Vermeulen who also heads the AURORA consortium. ‘Our goal at the end of the project is to provide a roadmap for the European Commission and to show whether or not we are covered by current regulations. We know that there are gaps, we just don’t know how large these gaps are and how deficient or sufficient current legislation is. I think these are the questions the entire CUSP consortium will need to answer.’

The potential effects of microplastics on foetuses

For Prof. Vermeulen and his AURORA team, the biggest question concerns the presence of potentially harmful plastic particles scientists have found in human placentas. They are investigating MNP exposures and toxicological and health effects during pregnancy and in early life.

‘We know that some of the chemicals related to micro- and nanoplastics have consequences in early life health if we think about developmental effects,’ he said. ‘If we look at air pollution research, we also see there is an effect of particles on birth weight and cognitive development. We also know that small particles in the air can cross the placenta barrier and directly expose the foetus. This is why it’s very important now to evaluate the impact of what specifically micro- and nanoplastics do during pregnancy and early life.’

‘Among the emerging contaminants, microplastics are the ones we are really interested in because even though they are all around us, and inside our bodies, we still don’t know what they do to us,’ explained Prof. Cirkovic Veličković, who is investigating the possibility that high concentrations of MNPs in the environment could increase the number of allergy sufferers or worsen their allergies.

The relationship between MNPs, allergic diseases and asthma

Building on her primary research interests related to allergy – one of the most common chronic diseases in Europe – Prof. Cirkovic Veličković has studied the impact of environmental changes on allergenic proteins. Now she’s looking into MNPs. ‘Very little is known about how MNPs influence allergic disease,’ she said.

To fill this knowledge gap, the Imptox scientists are investigating the complex role of MNPs combined with environmental contaminants such as heavy metals, allergens and microorganisms in food safety and human health, focusing on allergy and asthma.

‘In the Imptox project, we will study for the first time the effects of environmental or dietary exposure to MNPs on allergy and asthma,’ explained Prof. Cirkovic Veličković. ‘We expect to find evidence of the impact of micro- and nanoplastics on allergic diseases. Currently this is information that doesn’t exist.’

The Imptox multidisciplinary team brings together universities, research institutions, and small- and medium-sized enterprises from eight countries (Austria, Belgium, Croatia, France, Italy, Serbia, Sweden and Switzerland). The project also extends beyond Europe by cooperating with scientists from the South Korean campus of Ghent University supplying samples from the Yellow Sea coastal areas (known for pollution problems). The overall aim is to develop innovative tools to identify, extract, characterise and quantify MNPs and to investigate toxicity and responses to MNPs, contaminants and allergens.

‘One of the most difficult things up to now has been how to measure micro- and nanoplastics,’ said Prof. Vermeulen. ‘While microplastics can be seen under the microscope, nanoplastics are very difficult to detect, particularly in biological tissues. This is why we’re really pushing to advance the methods. Before we can start to measure them in the placentas of a few hundred mothers and babies, we need to scale up the methods.’

By communicating our findings within the cluster and working together, we can accelerate even faster than if we were working in isolation. &nbsp;

This is where the value of the CUSP cluster will be most visible. The five research consortia will contribute to uncovering exposure routes and developing new analytical tools. In this effort, cooperation is foreseen with the European Commission’s Joint Research Centre.

‘There are a lot of analytical constraints when analysing microplastics and we lack the standardised methods and reference materials,’ explained Prof. Cirkovic Veličković. ‘In this regard, the research actions that will be taken by our cluster can move forward the methodology.’

Prof. Vermeulen agrees. ‘Our collective wisdom is crucial,’ he said. ‘By communicating our findings within the cluster and working together, we can accelerate even faster than if we were working in isolation. For instance, if some researchers observe that a particle might attain or cross the lung barrier, then that particle might be of more interest for us to test. After all, what we are all doing is new and the knowledge needs to be rapidly shared.’

The AURORA project will focus on MNP exposures during pregnancy and early life and study their impact on reproductive and early-life health. It will develop novel tools for measuring MNPs in human tissues. It will then scale up these analytical methods to be able to detect plastic particles in placentas, blood and umbilical fluid – if they are present. The project includes epidemiological investigations to provide the first extensive evaluation of maternal and foetal MNP exposures and health perturbations, including placental function, immune-inflammatory responses and child development.

The PLASTICHEAL project will develop new methodologies and produce reliable scientific evidence for regulators to support risk assessment of MNPs. It will investigate the impact of MNPs on human health, drawing a variety of experimental human models and measuring potential health effects under short and long-term exposure conditions. It will generate human exposure estimates after identification, measurement, and characterisation of MNPs present in the environmental air, water and food sources, as well as in human biological samples of population groups with potential high MNPs exposure levels (biomonitoring study).

The PlasticsFatE project will improve our present understanding of the impact of MNPs and associated additives and adsorbed contaminants in the human body. It will establish validated methods to measure MNPs in complex matrices such as food (vegetables, fruits, beverages, fish etc.), human tissues and consumer products (toothpaste, beauty products), as well as relevant environmental media (air, drinking water, soils), assess relevant exposure levels/sources, fate and toxicity in the human body by using advanced cell culture and organ models that simulate real exposure to MNPs in the respiratory and gastro-intestinal tract.

The POLYRISK project will unravel the risks of MNPs that are ubiquitous in our environment and are likely to be entering the human body via inhalation and ingestion. It will focus on key toxic events linked to several chronic inflammatory diseases. It will advance analytical methods to detect MNP in complex matrices, up-to-date fit-for-purpose hazard assessment technologies and multiple real-life human exposure scenarios.