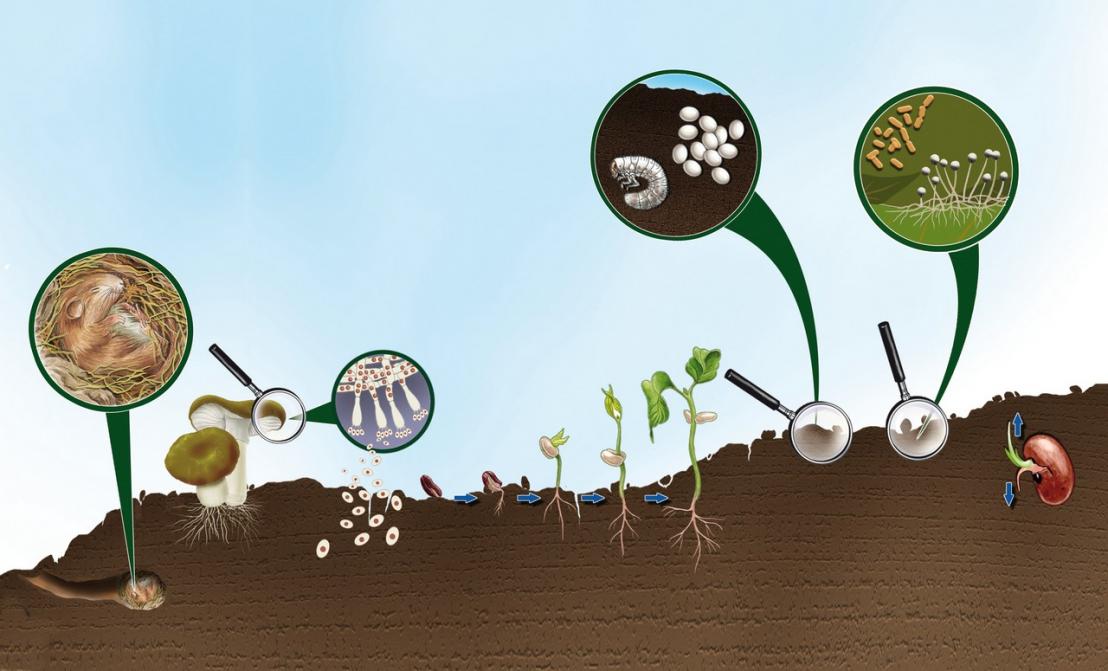 If we want to transition to a greener, healthier and more climate resilient Europe, it is important to ensure our soils are in good condition. However, the quality of soils is worsening because of unsustainable management practices, depletion of resources, climate change and pollution.

Soil hosts a quarter of our planet’s biodiversity and is home to about a quarter of all living species. But how many of us give this precious resource a second thought?

We should, because soil directly or indirectly produces about 95% of our food. Soil is important in so many other ways, too. It provides us with raw materials to fight diseases and ecosystem services that purify our drinking water, lower the risk of floods and droughts, and store huge amounts of carbon to alleviate climate change.

The EU wants to lead the transition towards healthy soils for food, people, nature and the climate by 2030. One problem is that about 970 million tonnes of soil is lost to erosion each year in Europe.

If this below-ground treasure is so important to us, then why are we allowing it to be destroyed? To repair or reverse the damage to soil’s rich yet fragile habitat takes decades – even centuries. We need to preserve the quality of soil before it is too late.

Soil health is a major concern for the Commission. It is therefore adopting a new Soil Strategy in 2021 and laying the foundation for a common EU framework to preserve, protect and restore soil. In addition, a Horizon Europe mission will lead the transition towards healthy soils for people, nature and the climate by 2030.

A third of the world’s soil is degraded. This means that the quality of soil declines and loses some of its capacity to support animals and plants. Soil biodiversity greatly contributes to soil health. Understanding the relationship between soil biodiversity and function is important to improve strategies to restore degraded soil.

The soil food web – a network of food chains linking the organisms that live in soil – is a good starting point. ‘Feeding relationships are important for soil structure, suggesting that stimulating the recolonisation of degraded soils by diverse communities of organisms will promote ecological engineering of soil structure, and therefore restore soil habitat,’ explained Prof. Dr Stefan Scheu, head of animal ecology at the University of Göttingen’s Johann-Friedrich-Blumenbach Institute of Zoology and Anthropology in Germany. This main finding came as a result of the AGG-REST-WEB project hosted by him and coordinated by Dr Amandine Erktan.

Using the food web to broaden our understanding of soils can also help to combat climate change. Research into feeding relationships could one day allow us to better predict how changes in land management practices affect carbon storage in soil. ‘We still don’t fully understand the mechanisms that drive carbon storage in soils,’ noted Prof. Dr Scheu. Some soils receive a lot of organic matter (plant and animal debris) but store little carbon, while others receive relatively little and store large amounts. Most organic matter in soils is not accessible to soil organisms, and this increases carbon storage.

‘Farmers are custodians of the European countryside,’ stated Dr David Fernández Calviño, researcher at the Department of Plant Biology and Soil Science, University of Vigo, Spain. ‘The tools and methods they use play a major role in safeguarding soil biodiversity.’ From universities, research centres and industry to non-profit organisations, farmer cooperatives and public administrations, he is working with a broad range of stakeholders to explore the biodiversity of soils in nine regions across Europe as coordinator of the SoildiverAgro project.

Several innovative management practices and cropping systems are currently being trialled in the field to protect, improve or increase soil biodiversity. Dr Fernández Calviño is looking into optimal crop rotations and multiple cropping and testing different alternatives to trap crops – plants that attract pests, usually insects, away from nearby crops. In addition, he is implementing a pest alert system to reduce the use of fungicides in potato and wheat crops.

Knowledge of the links between soil biodiversity and agriculture is still limited, which holds back the integration of biodiversity into farming practices. One successful method, however, is biocontrol, which uses natural “enemies” like microorganisms and insects to control pests and diseases. Another promising approach is the use of biofertilisers, which contain living microorganisms that improve a plant’s growth and yield, as an alternative to synthetic chemical fertilisers.

‘Agronomical practices that adopt such approaches aim to reduce the input of chemicals and synthetic products in crops, particularly the soil ecosystem, thus promoting soil health, food security and a more sustainable approach towards agriculture, while ensuring yield and productivity,’ observed biologist Dr Stefano Mocali. Dr Mocali, a researcher at the Council for Agricultural Research and Economics, Italy’s leading research organisation on agri-food based in Rome is developing a new strategy for soil management to improve the effectiveness of biocontrol and biofertilisation practices in agriculture as coordinator of the EXCALIBUR project. The proposed strategy exploits soil biodiversity’s potential.

The use of bio-based products will increase storage of carbon dioxide in soil thanks to improved plant growth and larger soil microorganism populations. ‘These outcomes mitigate the effects of climate change on the environment,’ said Dr Mocali.

Assessing soil biodiversity is another key challenge. However, there is no specific or standard framework to measure it in all its complexity. ‘A global standard is needed to avoid the fragmentation of knowledge,’ noted Dr Salvador Lladó, principal investigator at the private, non-profit Leitat Technological Center in Barcelona, Spain.

Dr Lladó is also technical and scientific coordinator of the SOILGUARD project, which is mobilising 25 partners from academia and industry in 17 countries around the world to boost the sustainable use of soil biodiversity. They are co-developing a holistic framework that will assess the environmental, economic and social value contained in soils.

Information gathered from the framework will be made available in an app. From farmers and landowners to policymakers, users of the app will be able to assess, diagnose and forecast the status of soil biodiversity. For example, a farmer who wants to transition from conventional management to organic can use the app to produce a full report on soil biodiversity and on the provision of soil-based, ecosystem services under current soil management practices. The app will also recommend region-specific strategies to increase environmental, economic and social wellbeing.