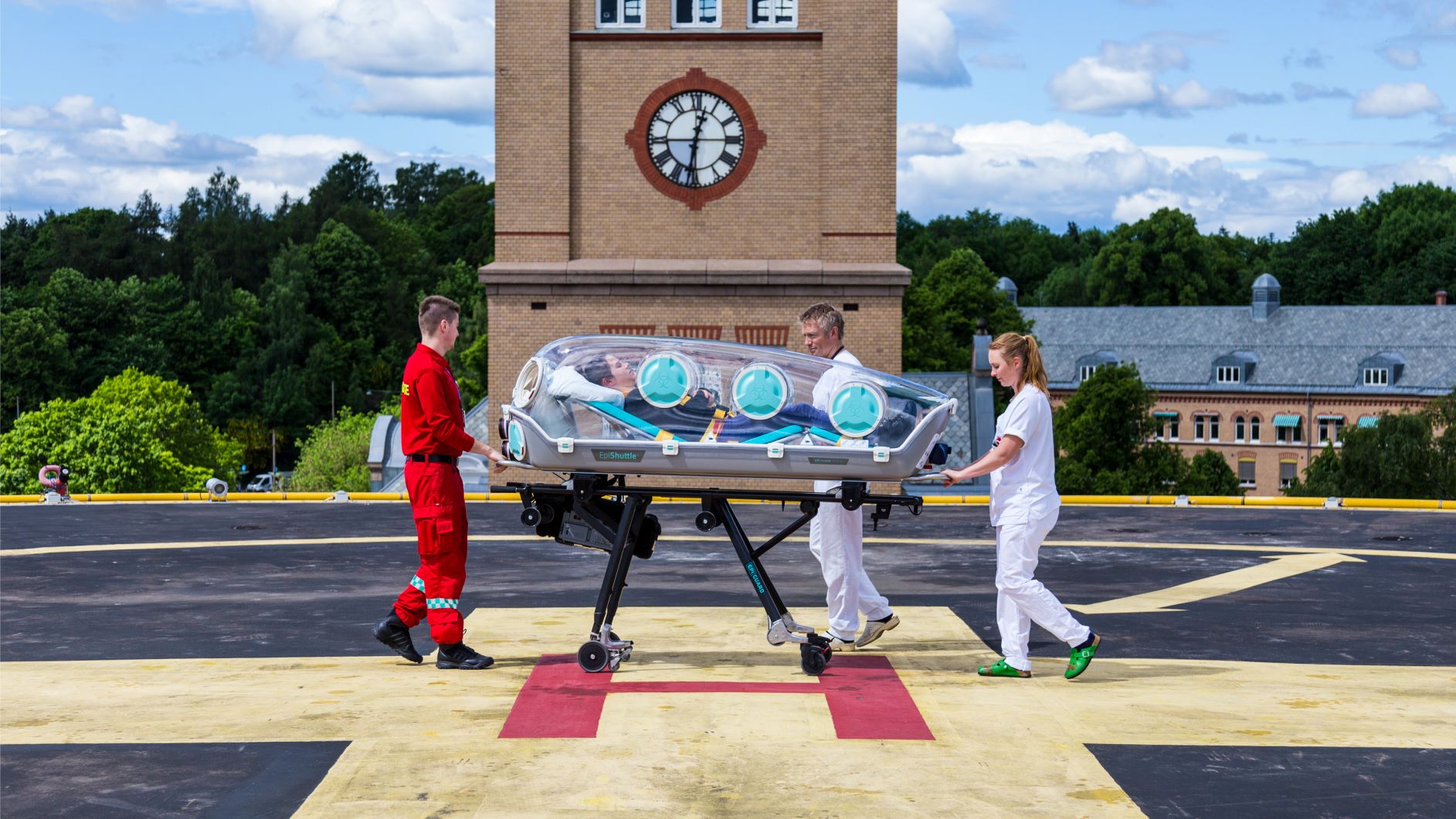 From bioluminescent testing kits to disinfecting robots, Horizon examines six innovations and technologies currently being developed to tackle the coronavirus.

An anti-microbial coating that destroys the coronavirus on impact could help to decontaminate commonly used surfaces, according to scientists from the UK. The coating, which can be dipped or sprayed on to surfaces such as touch screens and lift buttons, is made of synthetic antimicrobial peptides (mini-proteins), which pop the outer lipid membrane of the virus, effectively killing it.

‘This technology forces the microorganism to burst, almost like a balloon touching a cactus,’ said Dr Hugo Macedo, chief executive of air purification technology firm Smart Separations, which is developing the coating.

Dr Macedo and his team are exploring different applications for the smart coating, including to improve personal protective equipment (PPE). Antiviral stickers, which contain the coating on one side and an adhesive material on the other, could be applied to commonly used surfaces such as ATMs, says Dr Macedo.

The company is also looking into ways that the coating can be applied on their existing product, a ceramic-based filtration system that could destroy mould, viruses and bacteria such as Legionella, the cause of Legionnaires’ disease, present in the air. The company presented their technology to investors at a European Innovation Council pitching event in April and a Kickstarter campaign to fund a coated ceramic air filter for use in offices and care homes was launched in July.

An autonomous robot that emits ultraviolet C (UV-C) light and is currently used in hospitals to halt the spread of hospital-acquired infections is being tested for its effectiveness against coronavirus.

The UVD (Ultraviolet Disinfection) Robot uses UV-C, a type of ultraviolet light that does not usually penetrate the Earth’s ozone layer. Since it is not naturally present on Earth, biological material is particularly vulnerable to the effects of UV-C radiation.

‘If a microorganism is hit by this, it penetrates into the cell membrane and destroys all the larger molecules inside the cell,’ said Claus Risager, chief executive of Danish professional robotics firm, Blue Ocean Robotics, who design, develop and produce the robot. ‘That means that the cell functions basically stop – so they die.’

UV-C light is commonly used to decontaminate hospitals from bacteria and viruses, however stationary light sources mean that there are often areas that are missed by the radiation. As a self-driven machine, the UVD Robot is able to navigate around rooms to kill 99.99% of bacteria, says Dr Risager. A 300-bed hospital with intensive care units and surgical sites, he says, needs between 10 and 15 of the machines to disinfect effectively.

Blue Ocean Robotics, which has previously received funding from the European Innovation Council, say initial results for coronavirus are positive. ‘The coronavirus is quite big and quite heavy, so it means it’s very vulnerable. It’s one of the viruses that we destroy most easily,’ said Dr Risager.

Scientists in the Netherlands are creating a bioluminescent testing kit that could be used to confirm if someone’s immune system is producing antibodies in response to the coronavirus. The sensors are made of proteins that use luciferase, an enzyme used by fireflies to produce their glow, and emit blue light if antibodies are present in a blood sample.

The structure of each sensor protein is separated into two parts called ‘domains’, one that produces blue light and the other that emits fluorescent green light. The proteins will remain green unless a specific antibody is detected, in which case antibody binding triggers a structural change within the protein, switching the colour to blue. The light emitted isn’t powerful enough to be visible to the naked eye but can be detected by a smartphone camera.

According to Professor Maarten Merkx, professor of protein engineering at Eindhoven University of Technology and host of the ABSENS and LUMABS projects under which the technology was developed, the glow makes it particularly suitable for point of care diagnostics. ‘The principle of the assay (test) is very simple and doesn’t require a lot of fancy equipment, so for that reason it could be done in many different places,’ he said.

Originally conceived to detect antibodies for other conditions, Prof. Merkx’s team is now developing two variations of the technology, one to detect the antibodies produced in response to SARS-CoV2, and the other to indicate the presence of the virus itself by detecting traces of viral proteins. Prof. Merkx says that, once developed, the tests could give results in as little as 30 minutes. ‘(They) could be useful for quickly triaging – making sure that if there’s a suspicion, that you can quickly confirm that there is an infection,’ he said.

Initially designed as part of the Norwegian response to the 2014 Ebola crisis, the EpiShuttle is an isolated single patient transportation pod that has been used by air ambulances crews to transport infected patients out of coronavirus hotspots to regions with more capacity to treat them.

Infection control in an air ambulance can be difficult because of the lack of space, equipment and water. There is no physical partition between the cockpit and cabin meaning that pilots, who are unable to use PPE due to their own equipment, are at risk of infection. The EpiShuttle pod is entirely sealed save for a series of air filters to catch and contain microbes. This enclosed environment contains the infection, allowing patients to be safely moved by air.

‘What we see in the pandemic response is that transport has been a very significant part of it, because you have epicentres with a lot of patients and the intensive care capacity in those regions has been really overwhelmed,’ said Ellen Cathrine Andersen, chief executive of EpiGuard, the company behind the EpiShuttle. ‘With sufficient transport capacity, you’re going to be able to move patients to areas with less pressure and more available intensive care capacity.’

Alongside their deployment in air ambulances and helicopters, EpiShuttles have also been used by ground ambulance crews, as well as internally by hospitals when shielding infectious patients from healthy or vulnerable people. The design of the pod is currently being upgraded under the EpiShuttle 2.0 project to include a gas-based disinfection system to enable easy re-use.

A 3d-printed monitoring system for coronavirus patients which is worn like a pair of glasses could give healthcare professionals faster, more accurate data on the progress of the condition, according to the inventors. The glasses, which continuously monitor someone’s vital signs, were developed by Team Discover, a group of students from Hungary who participated in April’s EUvsVirus hackathon event to stimulate coronavirus innovation.

Developed over the course of 48 hours in consultation with doctors and nurses, the system is currently at prototype stage. ‘We were brainstorming what shape or form it should take, if it should be a headband, some sort of walkie-talkie,’ said Peter Lakatos, a data science student and member of Team Discover. ‘But then we resorted back to the glasses frame since it would be the most intuitive to use.’

The glasses feature three sensors: an infrared temperature monitor, a pulse oximeter to measure pulse rate and oxygen saturation, and finally a microphone to monitor breathing and inhalation.

‘Since we are able to measure (patients) more regularly, it would result in a more precise trend analysis,’ said Lakatos. ‘We could warn the nurses far quicker if any cases are deteriorating.’

The team is now in discussions with both Hungarian and international organisations to find ways to make the technology widely available. They believe the glasses could be used to monitor patients with a wide variety of conditions, reducing the time burden on medical staff. ‘This is a fairly useful product for hospitals because they not only keep their staff safe, but also they’re able to scale up their operations and keep them far more efficient,’ said Lakatos.

A real-time platform to connect healthcare providers with suppliers of PPE and medical devices could bridge the critical gap between supply and demand and avoid shortages of equipment, according to its founder.

Boris Mihov says the coronavirus crisis has revealed a scarcity in terms of valuable data. ‘How do you let the world know that you’re producing something that healthcare providers need? he said. ‘As you can see right now during the Covid crisis, the supply part of the equation is totally missing.’

The AidBind platform, which was also developed during the EUvsVirus hackathon, aims to make the procurement of medical devices and PPE easier by encouraging the clear and transparent exchange of information. This includes the needs of medical institutions, the stocks of manufacturers and the areas in which charities and NGOs can channel the donations they receive.

According to Mihov, the platform will also help such charitable and philanthropic organisations better operate. ‘For them it’s extremely hard to coordinate right now.’ he said. ‘So just by providing the data and making it available to these stakeholders, their work is getting way easier.’

The AidBind platform is due to be launched in Bulgaria within the next 4-6 weeks, with the aim of launching internationally in the coming months.