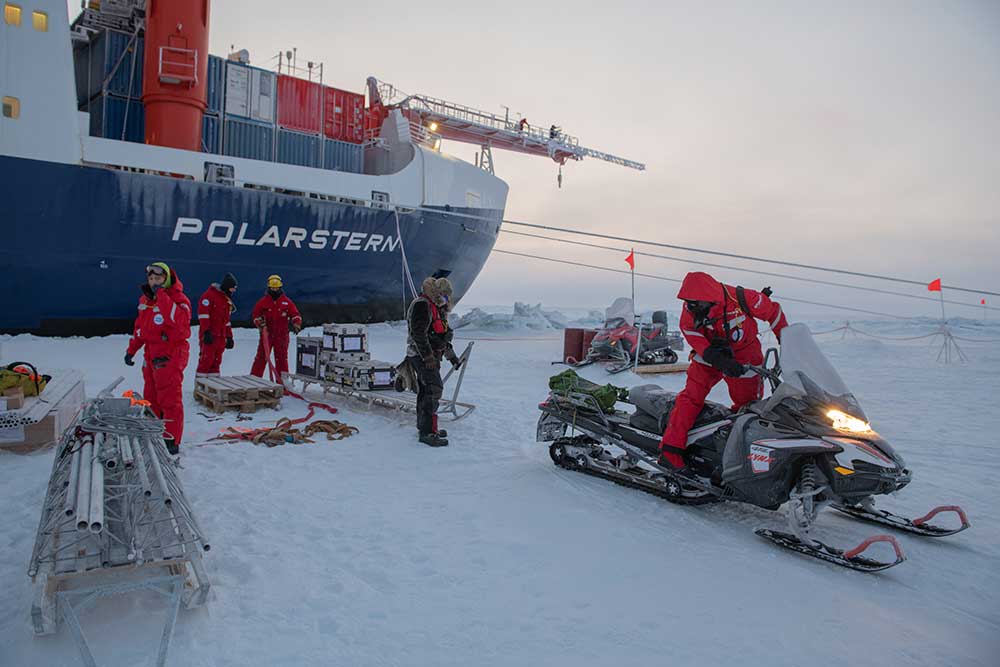 Sea ice researcher Dr Polona Itkin of UiT The Arctic University of Norway in Tromsø is currently aboard a research vessel spending one year trapped in Arctic sea ice to study climate change up close. On 20 January she spoke to Horizon from the ship, Polarstern, about working through the polar night, the shortcomings of satellite data and fending off polar bears.

We’re on a big research icebreaker, which is doing something unusual – it is not moving. (Currently) we are at around 87 (degrees) north, and (about) 95 (degrees) east, drifting northwest.

The crew is maintaining the ship, which is a big hostel-workshop, and we (scientists) are most of the time out on the ice doing snow and ice research, (at least) in my group (where I’m the current ice team lead).

We arrived on December 15th and are carrying on with the research the people before us did.

There is always the same ice around us, (but) it can suddenly break up. It is like it’s growing into a garden. And we want to measure and understand everything, so we are very busy going into our garden and digging in snow and ice. It’s very exciting. It’s very beautiful.

We all have to have headlamps because it’s the polar night. There will be no sunlight until mid-February. The first 100 or so metres are illuminated by the ship lights. But we had a full moon recently and everything was illuminated.

(As scientists) we’re try to understand how our planet works mainly by using numerical models and satellite images from space. With these, we can cover almost the whole planet.

We have to come home with enough data so that over the next few years, or decade, we can better understand how to improve our climate models and what we’re actually seeing from space.

I spend most of the working day on the ice. First, I get up and have breakfast. We have all kinds of breads and spreads and they make us pancakes every now and then.

At half past 8 we have a briefing. Then we go on the ice. We do something different every day. Lunch is at half past 11. The mess room is so small that we have to eat in shifts. But it’s never a big problem. I’m late for breakfast, early for lunch. Then we continue with work on the ice at 1 o’clock. In the afternoon, we spend four hours on the ice.

‘We all have to have headlamps because it’s the polar night. There will be no sunlight until mid-February.’

(The temperature) is around minus 30°C, but with the wind it can quickly get below minus 45°C wind chill. We have to keep our faces completely covered or out of the wind. If you look into the wind, you can get frostbite.

Today my team went ice coring, which means drilling, taking samples of ice. We will measure how salty the ice is and how big the crystals are, the ice temperature and so on. Biologists will check how much algae live inside and chemists will check how much nutrients, methane and other gases there are. So that’s what we’re doing today. We’re also taking snow samples in snow pits. We’re a big team, 15 people, and do a lot of things at the same time. Altogether I think we are about 100 people (63 scientists and 33 crew members) on board right now.

This morning I put data measured (over) the previous days into central storage and in the afternoon, I will be bear-guarding the snow pit team. So I’ll go out with the gun and I’ll be on lookout keeping everybody safe so that they can take snow samples.

We saw one (polar bear) yesterday. It was the first one we had seen this month and was very well behaved. It just looked at our equipment, didn’t damage anything and walked away.

The bears usually don’t attack. They’re very curious. Our task is to scare them away. We really don’t want to shoot any bears.

(After the four hours) we return for dinner. We are starving by half five. Then we have an evening meeting to figure out what we’re doing next day.

What we have discovered so far, which is something really new, is how salt from ice gets into snow. We knew that snow can be very salty, but now we have pictures of pockets of brine water in snow.

This is important for how snow looks from space. It means that it looks more similar to sea ice.

We might think that the ice is getting thicker where, in reality, there’s just more (salty) snow on it. Then we have an error in estimates.

It is very impressive to see how fast things can change. You can’t take any of this landscape in our garden for granted. You can wake up in the morning and your measurement installation is ruined or it’s laying on the floor because the ice moved and the cables snapped.

The environment is very fragile. And we see this. We want to observe pristine nature and just by walking or using a snow machine we can see how easily the ice is compacted.

That is one of the challenges of MOSAiC (the year-long expedition). We’re doing our best to do our work and preserve the environment. (When) we leave, we’re taking everything (all of our equipment) with us.

Some new pressure ridges formed recently, which means that there is ice sticking out like new trees. These have some colour; they’re not just white. If illuminated, they’re blue. But with the moonlight and the headlamps, they’re a bit grey or even green.

We have hundreds of ridges from helicopter observations and thousands of ridges captured by satellite images. By studying more than one ridge (in detail) – we now (have) two of them – we can (make) estimates (about) thousands of ridges and then we will be able to tell if the freezing and the melting of these ridges is important and has to be included in the climate models. Right now, it’s not in there.

DEARice (the project I’m working on) is mainly about how to bring very small-scale measurements like a 9cm-wide ice core towards (the) bigger scale in the numerical model. We are really into bridging this scale so that we can make our little observations useful for everybody and for generations to come.

The next team is supposed to arrive around the 15th of February. We are getting ready for that. We have to be able to let them know exactly what we did and how they should continue.

We work 12 hours a day. Some people more. It’s very exhausting, but we are so inspired we just do it. It’s crazy.

Besides all this, it’s a huge personal experience. We have this opportunity to watch and learn.

Standing out there in the wind at 10m per second and seeing how the snow drifts from one space and piles up to form a beautiful snow dune or a sastrugi (wave-like formation) right in front of our eyes – that’s a really special experience. It’s not often that you can stand there and watch this happening.

This interview has been edited and condensed.

MOSAiC is a year-long scientific research experiment – and the largest-ever polar expedition of its kind – where the German icebreaker RV Polarstern will stay trapped in Arctic sea ice, drifting about 7km a day. With the Arctic system a crucial testbed for our understanding of climate change, it aims to foster critical insights and a leap forward into what we know about global warming. About 600 experts and scientists from about 20 countries will rotate on and off the ship throughout the year to peer closely at the transformations happening on the ground in the Arctic. These results will feed into better climate predictions and inform adaptation and mitigation policies. MOSAiC is spearheaded by the Alfred Wegener Institute, the Helmholt Centre for Polar and Marine Research in Bremerhaven, Germany. The Polarstern set sail in September 2019.

DEARice, which is developing snow, ice and ecosystem models from Arctic observations from winter to summer, was selected by the EU-funded project ARICE to join the expedition. ARICE is helping scientists access six major polar research vessels, and is an example of how the EU supports research infrastructures.