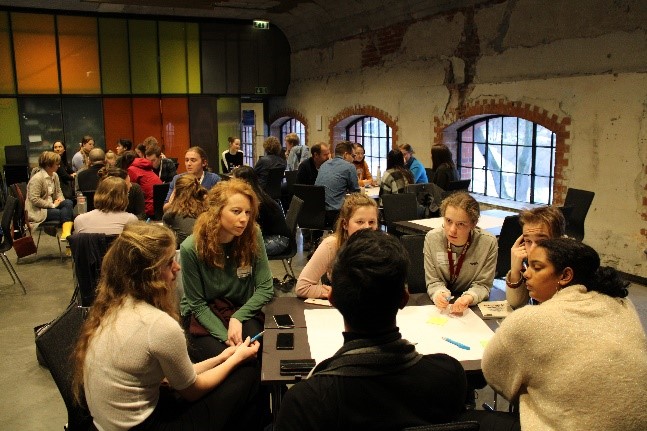 Teenagers rarely have a say in the public health policies that concern them, but we can’t halt the childhood obesity problem without working with them, says Professor Knut-Inge Klepp, executive director of the mental and physical health division at the Norwegian Institute of Public Health.

He is the project coordinator of CO-CREATE, an international public health project working with adolescents to shape measures to stem childhood obesity by 2025, and spoke to Horizon about what is driving obesity in Europe, the need for a range of solutions and why it’s important to listen to young people.

According to the World Health Organization, one in three 11-year-olds in Europe are obese or overweight. Who is most affected?

‘We see there is a strong social gradient. Children of parents with less education tend to have higher (obesity) rates than those of parents with higher education and higher income. And it’s a problem because we know that childhood obesity tends to track into adult years and (over a lifetime) tends to lead to a number of severe diseases.’

What are the main culprits?

‘When you look at children, there’s always individual variation regarding how susceptible you are. But when you look at the population level – and we see that there are big changes here – then you want to look at what is happening in society.

‘I would say that the two big drivers are that there is less physical activity among children. It could be that children are driven, rather than bike or walk to schools, play areas have decreased. They spend more time inside watching screens rather than being outside playing. And at the same time, the increased availability and accessibility to energy-dense (and low-nutrient) food.

‘(Such items) are promoted a lot and are also relatively cheaper to buy, so we have seen a large increase in the consumption of soft drinks and other snack types of food which are very high in energy.’

‘Within public health, it is striking how seldom youth are directly involved.’

In many ways, healthy food is plentiful. Is eating it related to this question of social gradient?

‘I think at least that’s part of it. A large proportion of people in Europe are eating healthy food, but you see then a very strong gradient in what’s being consumed. For example, the consumed amount of fruits, vegetables, fish and other nutritious products is reflected in differences in body weight. And we see these patterns emerge at a very young age. Even among 8, 9 year olds you can see differences not only in eating habits but also in in body weight according to parental social status.’

Where are we seeing childhood obesity the most?

‘In Europe today, there seems to be a north-south gradient, in that rates are higher in the Mediterranean countries than in Northern and Western Europe. The area that seems to be increasing the most is the eastern part of Europe.’

When did this become an issue?

‘We saw (a steep increase) in a number of countries in the 1990s and the 2000s. Over the last five to 10 years, in some countries it seems as if that increase has levelled off and there might be some tendency to decline.’

How big a role does marketing have to play in terms of food selection?

‘Across Europe you can see that a lot of marketing is addressing children. The research that has been done claimed that the products that are being marketed are dominated by the type of products that the health authorities recommend people eat less of. So there seems to be a mismatch between the food being marketed to children and the dietary recommendations given at school and by the health authorities. That clearly is a challenge.

‘And of course, this also differs between countries because some countries have more regulation in terms of to what extent you can market directly at the children or regarding what type of products.

‘One area that is of great concern right now is electronic advertising via social media. That is a way where you can get directly to children and it’s much harder to monitor both for parents and for researchers. There’s a lot of effort going into that area right now to see how we can better monitor and have some regulations regarding electronic marketing to children.’

Parents may struggle to identify if their child is obese or overweight. From your perspective, what is the parents’ or caretakers’ role in all of this?

‘They of course have a very important role to play as they are the ones who purchase the food, prepare the food. They are role models for the children. And we know that when it comes to how active you are and what kind of food you enjoy eating, a lot of what you learn in the early formative years of childhood and early adolescence are habits that you bring with you later in life.

‘But, then again, parents also have very different opportunities for being physically active (and) to what extent they can afford healthy food. I’m afraid that we put too much pressure on parents. Society really has to provide opportunities for all people to be able to make healthy choices at a low cost.’

So how should we tackle childhood obesity?

‘I think for too long we have tried to solve this complex problem with simple solutions like some more education or minor changes in what’s being offered for food at school.

‘There has to be more coherence between policies, the way we shape the environment and also the education and counselling that’s being provided. I think that’s a key aspect and something we can learn from other areas in public health – for example when it comes to tobacco. It wasn’t just one policy measure or more education. It was a set of different measures that had to be implemented to really bring change (in smoking rates).’

What do we already know about what works?

‘We know that it is possible to reduce marketing pressure of unhealthy food and drinks for children by putting in place policies. We also know quite a bit now about the impact of taxes or fiscal measures – that a lot of these food items are quite price sensitive, particularly among younger people. If you increase the price of soft drinks or chocolate, consumption tends to go down, and the same with more healthy foods – if your lower the price, consumption tends to go up.

‘We know that if you create safe bike routes or footpaths where children can actively walk or bike to school or to the playfields, they tend to be used. We also know that good labelling, front-of-pack labelling that actually communicates to consumers what are healthy and less healthy foods, works well and can help families put together a more healthy diet.’

In your CO-CREATE project, you’re asking teenagers for their input on tackling the problem. Why is this important?

‘So it’s interesting then to engage with them and see what they think are the important factors driving (being) overweight and obesity and what is their take on what should be done.

‘Within public health, it is striking how seldom youth are directly involved. There’s a lot of research on them, but it’s not that often that they are included as end users, so already involved in work that relates directly to them.’

The five-year project is in its early stages, but what are some of the issues adolescents are raising?

‘The issue of mental health comes up very clearly – much more so than in the literature. I think it (their concern) definitely has to do with social and mental wellbeing and body perceptions.

‘Another thing that comes up is what places do you have to meet and hang out. And at least here in Norway we hear that the fast food outlets are the place where they (adolescents) meet after school because they have free access to internet and it’s warm during winter. So it’s not the food that is the important thing, but actually a venue where they are allowed to stay. That’s also something that was kind of novel. We hadn’t really thought of it that way.’