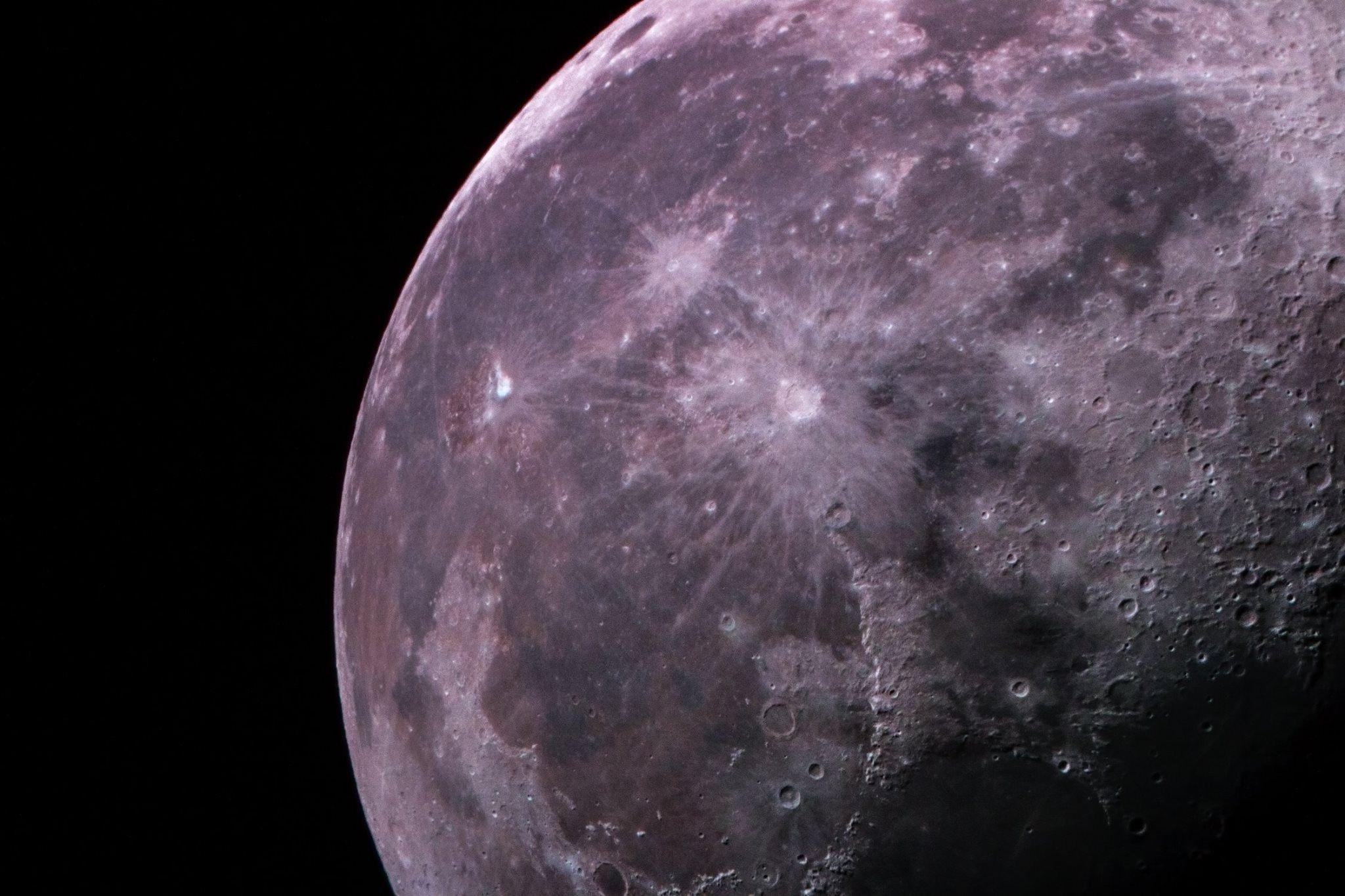 Fragments of moon rock brought back from the lunar surface by astronauts on the Apollo space missions are providing new insights about where our planet’s life-giving water came from.

The next time you take a sip of water, take a moment to consider where it has come from. It may have travelled from a local reservoir to your tap, while bottled water can come from springs in another country entirely.

But new research suggests the water we drink and depend upon to sustain life here on Earth may have its origins in a far more distant place – outer space.

New analysis of moon rock fragments brought back by Apollo astronauts in the 1960s and 1970s suggests much of the water on our planet was carried here by asteroids and comets that collided with the Earth shortly after it formed 4.54 billion years ago.

The research, which uses modern techniques to look at the composition of chemical traces in the rocks, is also providing new evidence to support theories about how the Moon itself formed and how the traces of water found on its surface got there.

‘The moon is like a time capsule,’ said Professor Frédéric Moynier, a cosmochemist at the Institut de Physique du Globe de Paris, in France. ‘Its rocks are far older than anything we can find here on Earth, so they hold a lot of valuable information.’

Volcanic activity and the continuous movement of tectonic plates have destroyed all of the oldest rocks here on Earth. The oldest to be found here, found in a few locations like Greenland, are just 3.8 billion years old.

The moon’s rocks, however, have remained largely unchanged since it formed 4.51 billion years ago. Hidden inside the minerals in the rocks are tiny quantities of chemicals such as zinc, potassium, copper, chromium and even water, which was also found to exist in small frozen deposits in meteorite impact craters on the lunar surface last year. These chemicals are known as volatiles due to their relatively low boiling points, which means they can evaporate from a planet’s – or a moon’s surface.

By looking at the relative amounts of different isotopes of these volatiles in lunar rocks, scientists like Prof. Moynier have pieced together information about the moon’s early history and compare this to what we find here on Earth.

These isotopes’ ratios act like a fingerprint that can be used to match the source of the materials found on Earth and the moon. Dr Mahesh Anand, a reader in planetary science at The Open University in the UK and leader of a project called RESOLVE, has been using sophisticated spectroscopy techniques to study the volatile isotopes trapped inside crystals of a mineral called apatite in rocks brought back by the Apollo missions.

He and his colleagues have then compared these to the isotopic compositions of volatiles here on Earth, along with those found on asteroids and comets, which have been obtained from meteorites found on Earth and interplanetary space missions to visit comets, such as the European Space Agency’s recent Rosetta mission.

Three years ago, Dr Anand was part of a study which proposed 80-90% of the water on Earth and the moon came from an asteroid-like source. ‘Less than 10% came from a comet-like source,’ he said.

Last year, he and his team published further findings based on high precision analysis of the oxygen isotopes found in rocks on the Earth and moon. They found only tiny differences between the isotopic properties on the two bodies.

‘If the water had arrived after the moon had formed, the two would have had very different isotopic fingerprints,’ said Dr Anand. ‘It suggests that the Earth and the moon received water together at the same time.’

This points to a tantalising scenario – for a small body like the moon to have obtained the same isotopic composition suggests they may have been part of the same planet. It supports theories that a Mars-sized protoplanet called Theia crashed into Earth a little over 4.54 billion years ago, throwing out a shower or vapour and debris, which condensed to form our moon.

If the Earth and moon formed in this giant impact after water had already arrived, as the findings by Dr Anand and other teams now suggest, the moon should have received a share of that water. Minute quantities of oxygen and hydrogen trapped inside rocks beneath the surface suggest there was once more water on the moon than there is now. Recent unmanned missions to the moon have discovered a few remnants of water ice trapped in sheltered craters around the poles, but much of the moon’s surface is now dry.

So where did the moon’s water go?

This is where Prof. Moynier’s work comes in. He is leading a project called PRISTINE that aims to measure the isotopic levels of volatiles in lunar rock to learn what happened to the water on the moon.

‘The difference between the isotopes is weight as the atoms have different numbers of neutrons in the nucleus,’ said Prof. Moynier. ‘When you heat up volatiles like zinc, potassium and water, the isotopes behave in different ways. The lighter ones will turn to vapour more readily while the heavier ones will remain behind in the residue.’

By looking at the ratio of heavy isotopes to light ones in more than 40 Apollo rock samples, Prof. Moynier and his team have pieced together some of the history of water and other volatiles on the moon.

They have focused on solid volatiles like zinc and potassium because there are relatively higher concentrations of them in lunar rocks than water.

‘Water is so volatile that there is very little of it in lunar rocks, which makes it hard to detect in the small samples we are dealing with,’ explained Prof. Moynier. ‘So we can use other volatiles like zinc, potassium and copper as proxies that can tell us something about what happened to the water. Even so, there is 100 times less zinc in lunar rocks than those on Earth.’

Prof. Moynier and his colleagues found that as well as having far less chromium, zinc and other solid volatiles, the traces from the moon had different isotopic ratios compared to Earth – theirs had far more heavier isotopes.

‘It suggests that the moon got depleted in these volatile elements by evaporation at some point,’ he said.

He believes that rather than being lost in the giant impact that cleaved the moon from the Earth in the first place, it may have lost its water and other volatiles sometime later.

It is thought that after the moon began to form following the giant impact, its surface remained molten for several million years. This magma ocean is thought to be what led to the distinctive light and dark areas, or mare, that are visible on the moon’s surface.

‘As the isotope distribution depends on temperature, we can use it as a thermometer to tell us what happened,’ said Prof. Moynier. He and his team have used chromium isotopes to calibrate what they were seeing in the lunar samples to temperature.

They found the volatiles were not lost at the extremely high temperatures that would be expected in an event like a giant impact, but at lower temperatures of 1,200 degrees C.

‘This is exactly what the temperature of the magma ocean of the moon is supposed to be,’ said Prof. Moynier. ‘What we see is that the moon lost its volatiles not during the giant impact itself, but maybe a million or so years afterwards.

‘They evaporated off, but due to the gravity of the Earth, they probably then fell back onto the Earth. So some of our water and other volatiles have come from the moon. Not a lot, but some.’

But the story doesn’t quite end there either. Dr Anand and his colleague Dr Ana Černok, a geochemist at The Open University, have been studying the effect of meteoroid impacts on the isotopic compositions of volatiles in lunar rocks.

Gathered from a variety of sites during NASA’s Apollo 17 manned mission to the moon in 1972, the samples consist of surface rocks, cores drilled down below the surface, and material from impact craters.

The two have been able to look for signs of shock in the apatite crystals that would have been caused by meteoroid impacts. They found that while some of the samples show significant signs of shock, the isotopic compositions remain largely unaffected.

This suggests that the volatiles like water trapped inside these crystals have not been altered despite bombardment from meteorites on the moon. Other substances like uranium trapped inside the apatite crystals along with the water have also allowed them to date when they formed.

The results still have to be published, but Dr Anand says they are finding ages that have never been recorded in lunar samples.

‘We are still trying to figure it out ourselves, but it seems to be pointing to a unique event in the geological history of the Earth-moon system.’