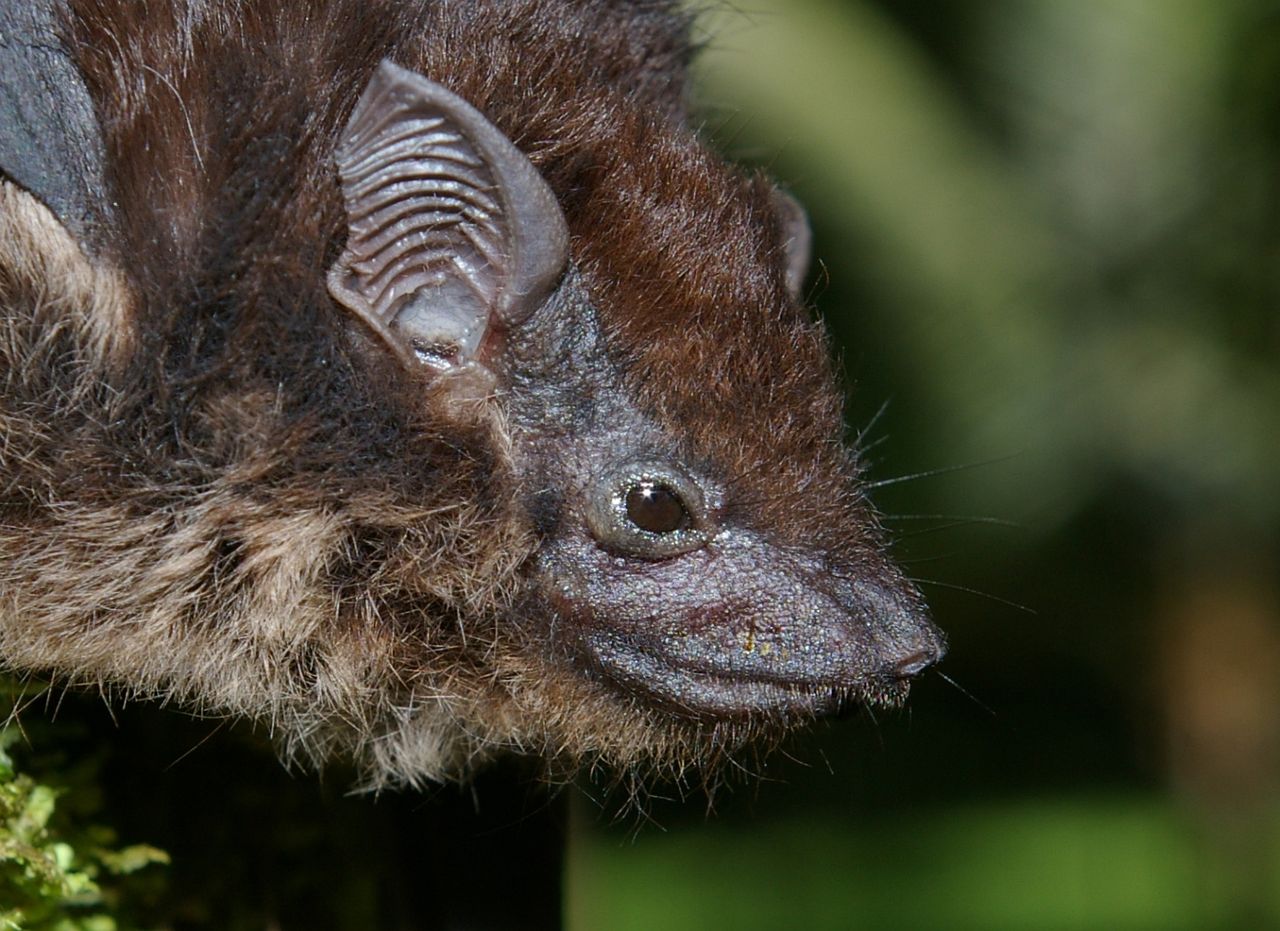 A slow drive in the dead of night through the forests of northwestern Costa Rica helped home in on the target. Dr Mirjam Knörnschild and her team had equipment with a microphone hooked to the top of their car to take recordings of bats.

‘Local people probably thought we were crazy or lost,’ she said. ‘Or both.’

But in these expeditions last year in the Guanacaste region, her team was seeking to narrow down the point at which two distinct populations of bats mix in their highest numbers. And it worked. Later, by analysing the recordings of the differing echolocation calls the bats use to orient themselves and hunt for prey, they managed to cut the 50 to 60-kilometre radius to just a couple of kilometres.

Doing this was a key step in the next phase of the project CULTSONG, which examines bat song dialects used for specific purposes such as territorial signalling and courtship, and that differ from less distinct general chatter. A key aim is to uncover whether such culturally acquired traits can, in fact, lead to organisms dividing into separate species through the process known as speciation.

This may have significant implications for investigating how culture – or learning gained through socially transmitted behaviour – affects evolution. That includes human evolution, which is already known to have been influenced through interactions between culture and genes, such as in the development of lactose tolerance after the onset of livestock farming.

On top of that, vocal learning has been described little in other mammals, so investigations could help shed light on how language evolves.

Dr Knörnschild, a behavioural ecologist at the Natural History Museum in Berlin, Germany, who leads CULTSONG, explains that exploring animal culture is a relatively young field outside the usual suspects such as great apes, whales and songbirds. And because we can’t time-travel to see evolution in action, it’s even harder to ascertain whether cultural changes actually result in speciation.

However, her team’s focus species – the greater sac-winged bat (Saccopteryx bilineata) – has characteristics that give us a unique opportunity to shed light on this, says Dr Knörnschild.

For a start, the researchers have found that the bat is a so-called ring species in part of the range in which it lives. In such species, an ancestral population divides over time around each side of an uninhabitable geographical barrier, gradually diverging genetically. Eventually, the populations meet again but do not interbreed there, effectively making them separate species.

In the case of S. bilineata, this barrier is the Talamanca mountain range that extends from western Panama into the south of neighbouring Costa Rica.

Around a decade ago, Dr Knörnschild’s team started finding that some populations in Guanacaste differed markedly from others in size and song compositions used. Tracing the bats back around the Talamanca range, evidence pointed by 2015 to S. bilineata being a ring species. The team later confirmed this by verifying the absence of interbreeding at the end point.

‘In the contact zone of these two genetic populations, they’re ignoring each other completely,’ said Dr Knörnschild. ‘It’s sort of like having a time machine. If you have such a ring species, you can basically go back around the ring towards the ancestral population.’

She added that her team’s genetic analysis suggests the species’ expansion along the mountain range started within the last 80,000 years, so the speciation must have been recent in evolutionary time for a bat.

‘In the contact zone of these two genetic populations, they’re ignoring each other completely.’

Finding a ring species itself was a ‘super-rare and really lucky find’, says Dr Knörnschild, with only a handful of organisms generally accepted as true examples. But the ring for S. bilineata was also shorter than the team expected for a flying species, measuring around 500km end to end. ‘Normally when you have a highly mobile animal like a bat that is able to fly, you would expect a ring that leads into speciation to be really large,’ said Dr Knörnschild.

She points out that one species in which song culture has been examined, the greenish warbler, has a ring stretching thousands of kilometres around the Tibetan plateau, without a smooth, continuous and uninterrupted genetic and geographic divergence throughout.

Not only does the short distance make studying S. bilineata relatively easy, but it also means high uniformity in its lowland tropical rainforest habitat, allowing non-cultural influences on speciation such as varying climates, food sources and competitor species to be more easily excluded, said Dr Knörnschild.

‘We think the reason this change happened in such a highly mobile animal in such a short evolutionary time frame on such a short geographic scale is because culture (socially transmitted behaviour) was accelerating these differences.’ Otherwise, she says, they shouldn’t have been able to accumulate enough genetic differences.

Crucially, Dr Knörnschild adds, having a short continuous ring may make it easier to distinguish cause and effect about whether cultural change led to speciation or vice versa – something that has usually been very difficult to test.

The team will do this by using genetic tests and song samples to determine if the divergence of song dialects seem to amass before or after significant genetic divergence. If they happen beforehand, said Dr Knörnschild, it will suggest that dialect change is driving genetic change – and ultimately speciation. Her team will also study colonies within the new two kilometre contact zone they established, analysing how the bats interact there and respond to vocalisations of the other species.

‘I think it’s one of the few species in which we have a fair chance of disentangling whether cultural differences precede genetic differences or whether they succeed them,’ she said.

So far, this part of the research has been delayed by Covid-19, but Dr Knörnschild is hopeful she can return to the field by next spring. That will also allow some final genomic tests to refine the data in a study confirming S. bilineata as a ring species, which her team had originally hoped to publish early this year.

Bats additionally offer a rich means to analyse social interaction and linguistic development in animals in general, due to the complexity of their communication. As Dr Knörnschild’s research involves close observation of bats, her team is continuously discovering new facets of this.

Recently, for example, they found through sound recordings that adult S. bilineata females use ‘baby talk’ with a different timbre and pitch when addressing pups. Dr Knörnschild speculates that this could perform a similar role to that in humans, where it increases attention and facilitates vocal learning by helping the baby to pick out elements of speech.

Coupled with the finding that adult males communicate differently with pups in a way that seems to transmit their group’s ‘vocal signature’, this highlighted that their interaction is more complex than thought. ‘The deeper we dig, the more interesting things we find,’ said Dr Knörnschild.

Dr Yossi Yovel, a neuroecologist at Tel Aviv University in Israel, has also been looking into social communication as part of decision-making in bats in the GPS-Bat project he leads.

Rather than song, his team is looking into interaction through bats’ everyday background ‘chattering’. ‘It’s interesting to see how this more fundamental type of communication develops,’ he said. Though he says this is harder than analysing more distinctive songs, it has been made possible by new technology such as machine-learning tools adapted from use for human voice recognition.

His team captured adult Egyptian fruit bats (Rousettus aegyptiacus) in a natural roost in Israel, then continuously monitored them and the pups they gave birth to using ultrasonic microphones and video cameras.

Machine learning enabled them to discern context from the chatter’s frequency, such as whether it concerned food, sleep or sex, and the individuals involved. ‘We showed that individual identity can be determined, so you can tell which individual is calling.’ More surprisingly, he says, the identity of a bat being addressed could even be discerned half the time.

Dr Yovel’s team has also created a publicly available database of almost 300,000 files that he described as ‘probably one of the biggest databases ever collected for an animal’, representing the full repertoire of bat vocalisations they recorded. This aims to provide a comprehensive starting point for further studies into social communication, with some groups using it already.

Moreover, the researchers have demonstrated the emergence of chatter dialects through social learning in bats. Three groups of pups were exposed for a year, until adulthood, to their mothers’ vocalisations, plus an artificial playback representing a group-specific dialect. They each emerged with distinct dialects biased towards the playback, suggesting they are influenced by the entire crowd around them.

The team is now further analysing the data set it has created, looking to break down the bats’ communication in depth by analysing the order of sounds in their vocalisations to find out the structure of this ‘language’ – something that can be likened to examining syntax in human speech.

‘You can imagine if you arrive on a new planet with animals that have a language there, and now you want to try to understand it without the Rosetta Stone: how do you do it?’

Some of the next steps in this field, which Dr Yovel says others are already looking into, is what happens in bats’ brains when they chatter. He said one advantage of examining bats is that their brains are a good model for those of people due to similarities with the human brain, so it could ultimately help better understand our own brains and vocal learning difficulties.

‘I think we understand now that animal vocalisations contain a lot of information,’ he said. ‘To some extent this was known, but this idea has been strengthened dramatically.’

And Dr Knörnschild says that finding more about the complexity of animal culture can bring more attention to unique populations for conservation efforts. ‘When you have pronounced cultural differences, losing populations is tragic because you’re losing these animal cultures that have been built up over many years,’ she said. ‘And they may hold local solutions to specific problems or unique mating preferences not found anywhere.’