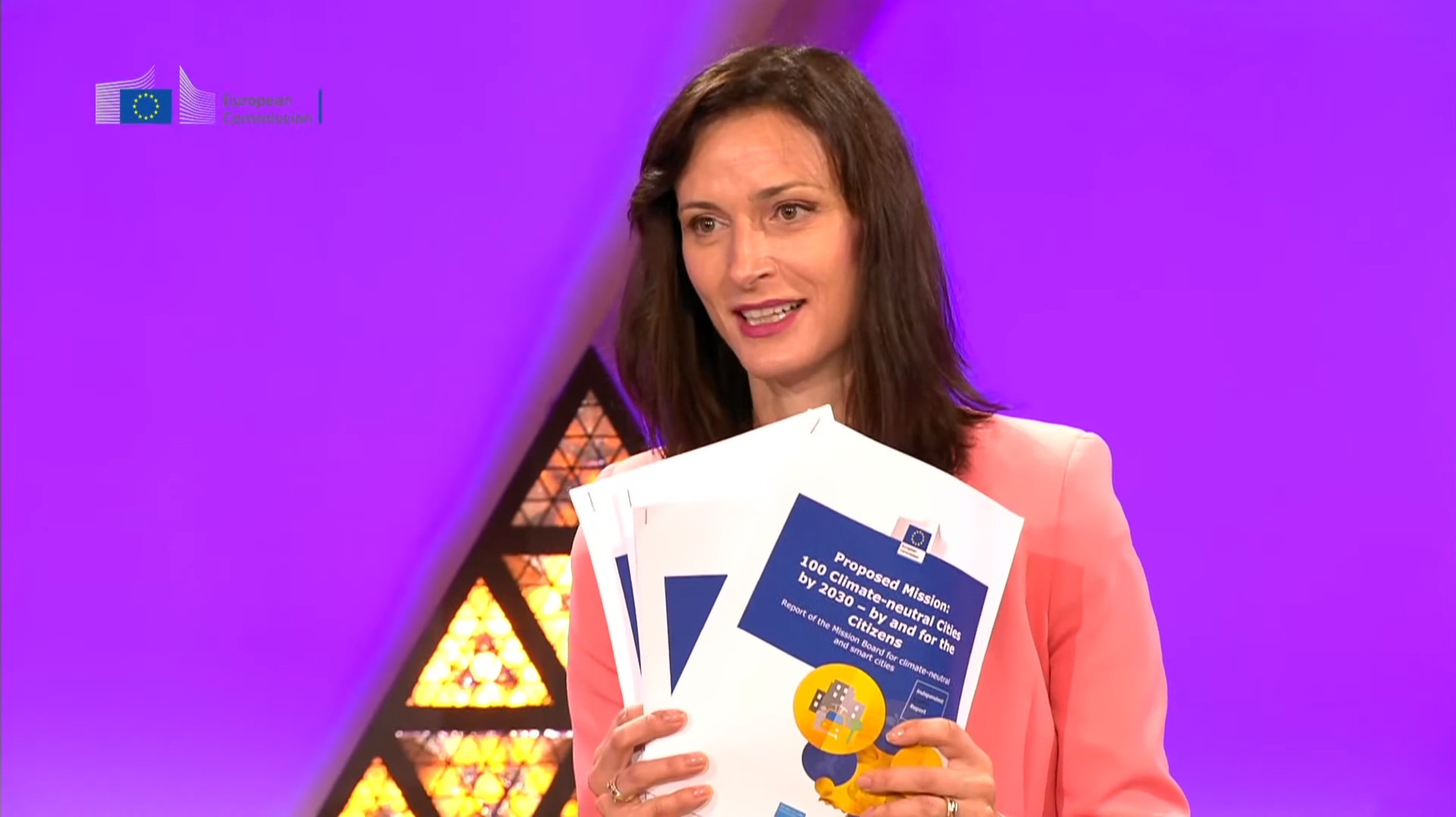 Five ‘mission reports’ outlining ambitious 10-year plans to tackle some of the major challenges faced by Europe were officially handed over to EU Commissioner Mariya Gabriel on 22 September at the opening session of this year’s European Research and Innovation Days.

The five so-called missions, which have been a year in the drafting and drawn up after consultation with European citizens, are designed to provide a bold, inspirational approach for research and innovation to tackle five issues: cancer; adaptation to climate change; healthy ocean, seas and waters; climate-neutral and smart cities; and healthy soils.

Receiving the reports, Commissioner Gabriel said: ‘It’s not that we have not tried (to tackle these challenges) – billions are spent every year using disperse initiatives. Each of these initiatives may be doing a great job, but the whole does not match the sum of the parts.

‘We all agree there is a need of a holistic approach.’

The missions are a new concept for EU research funding and will form part of the next funding programme, Horizon Europe, which is due to kick off in 2021. The next step is for the European Commission to decide how missions will go ahead, a decision due by the end of this year.

The mission concept is partly inspired by NASA’s Apollo 11 mission to put a man on the moon and have been developed by a board of experts including academics, policymakers, business people and citizen representatives.

Each of the five missions use the year 2030 as an endpoint and are designed to have clear targets and drive systemic change.

Speaking at the handover ceremony, Professor Walter Ricciardi, President of the Italian National Institute of Health and chair of the cancer mission board, said: ‘Europe has a quarter of all cancer cases and less than 10% of the world population. The number of new cancer cases diagnosed is projected to increase by 25% in Europe by 2035. If we don’t act now, of course, this could be a serious problem.’

The aim of the cancer mission, entitled Conquering Cancer: Mission Possible is to avert more than 3 million additional premature deaths over the period 2021 – 2030.

Among his board’s 13 recommendations are starting an EU-wide research programme that can use patient genomic data to better understand an individual’s cancer risk, and creating a virtual, federated European Cancer Patient Digital Centre so that cancer patients and survivors can share their healthcare data to improve personalised treatments for others.

‘The mission is not only research,’ said Prof. Ricciardi. ‘The mission is to support member states, it’s to improve the lives of individual citizens.’

Connie Hedegaard, the former European Commissioner for Climate Action and head of the adaptation to climate change mission board, used the 2020 coronavirus pandemic as an example of the importance of having a resilient society.

‘If anything, the Covid-19 crisis has taught us all some lessons,’ said Hedegaard. ‘We have seen how costly – economically speaking and in human terms – it is to ignore science. We have seen the necessity of focusing more on building resilience in our societies.’

The mission A Climate Resilient Europe is designed to help European communities to become better prepared for the worsening effects of climate change.

It proposes working with different regions and communities throughout Europe to design ways of improving how they deal with climate disruptions. This involves, for example, funding research into ways to climate proof buildings in energy and resource efficient ways, better using public spaces, developing early warning systems for storms, and incentive schemes to make sure water is used efficiently.

‘We all agree there is a need of a holistic approach.’

Pascal Lamy, former EU trade Commissioner and former Director-General of the World Trade Organization, told the R&I Days audience that there’s a need to change the way people view their relationship with the Earth’s hydrosphere – the water on our planet.

Lamy chairs the board of Mission Starfish 2030: Restore our Ocean and Waters. ‘We were inspired by this small animal who’s very nice, but very fragile’ he said. ‘The rest is horribly complex – restoring EU ocean and waters.’

Decades of pollution, litter and unsustainable practices such as overfishing, have led to a decline of marine biodiversity and biomass in the last 50 years, the mission report says. Climate change has also amplified the damage.

To regenerate Europe’s ocean and waters by 2030, the mission recommends a mixture of policy, such as ending overfishing and regulating underwater noise, and environmental goals, such as regenerating 20% of degraded habitats.

Also speaking at the handover ceremony, the chair of the cities mission, Hanna Gronkiewicz-Waltz, emphasised the importance of making the missions inclusive.

‘As the former mayor of the capital city Warsaw I know that to make progress on the climate transition, we need the support of citizens and the private and public stakeholders,’ she said.

Cities cover about 3% of the land on Earth but produce around 72% of all greenhouse gas emissions. The mission 100 Climate-Neutral Cities notes that many of the climate-friendly and smart technologies to lower emissions already exist, though they are poorly implemented. The mission aims to have 100 cities sign on to new ‘Climate City Contracts’ that will use these technologies to make themselves climate-neutral by 2030. It involves cities receiving funding, creating new regulations, and collaborating with locals to develop their own contracts.

Cees Veerman, former Dutch minister for agriculture and chair of the board for the soil health and food mission, Caring for Soil is Caring for Life, spoke of the economic impact of what is maybe a lesser-known challenge for Europe – soil health. ‘In monetary terms, we lose 50 billion euros per year, because it’s always deteriorating,’ he said.

The mission report says that in Europe, it is thought that 24% of land has unsustainable water erosion rates and another 25% is at a high risk of desertification in southern, central and eastern Europe.

By 2030, the aim of the mission is to make sure that 75% of soils are healthy and can provide their role in the ecosystem. This includes providing food, regulating the flow of rivers or, in the case of bog lands, removing carbon from the atmosphere. The mission aims to establish ‘living labs’ where landowners, and researchers can work to develop new agroecological principles and organic agricultural practices that have shown evidence of improving soil health.