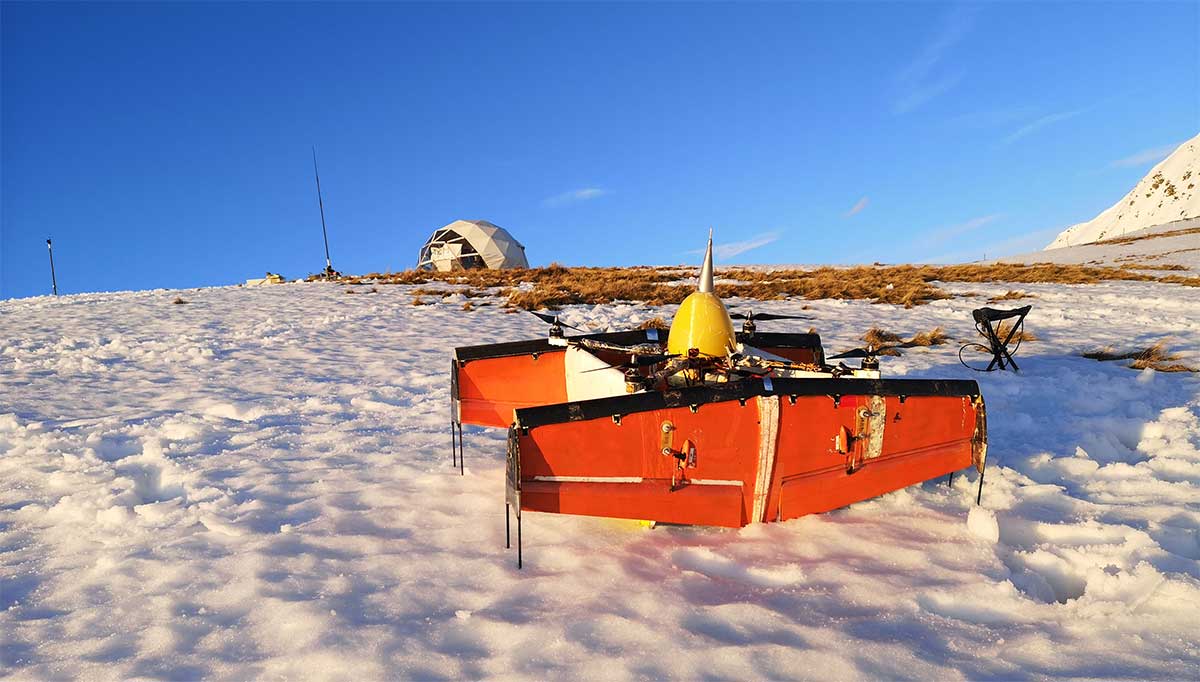 By harnessing the power of strong winds at higher altitude than turbines reach, airborne wind energy could be another key source of renewable energy, but it will need a combination of successful designs, more robust software and good storytelling to really take off.

The square drone shakes in the wind with the Swiss Alps in the background. At first glance, this looks like a holiday video of a drone enthusiast, except that the drone is generating energy when it flies. A cable connects it to the ground and when the wind pulls up the drone, it releases the cable through a winch, and energy is produced. This is a test of an airborne wind energy-system by the company Skypull from Switzerland, and it might be a key technology in shaping the future of renewables.

In attempts to tackle climate change, wind energy is probably going to key. By 2027, the International Energy Agency estimates that wind turbines will be the number one source of energy in the EU. Yet that also comes with a range of downsides: turbines are big, expensive and hard to build.

That’s why a range of scientists and startups are now experimenting with so-called airborne wind energy. Designs differ greatly, but generally it means using a blimp, kite or drone, which is attached to the ground with a cable, to produce energy. Airborne installations such as these can access stronger winds by flying higher than conventional wind turbines, while also, in theory, being cheaper and easier to install, compensating for some of the weaknesses of ground-based wind.

Skypull’s design is a hybrid between a multicopter drone, and a regular fixed-wing aircraft. The craft looks like a box, with four wings attached to each other in a square and rotors on the corners. This allows it to take off in difficult spots but at higher altitudes fly like a regular glider, which generates lift through its wings. Right now the team is still testing out the concept with smaller designs of around 1.25-metre wingspan, but eventually they want to build a drone with a total 17-metre wingspan.

The startup took off when the three founders – Mona, Marcello Corongiu and Aldo Cattano – met. ‘When I first met Aldo, he presented the idea to me, I remember my first reaction was: “This is crazy, this will never work”,’ said Mona, an aerospace engineer who had been involved with several startups before. Yet, over time he became more convinced about the potential. ‘I looked at the documents and numbers, and checked everything, which convinced me.’

Afterwards, the company participated in several startup competitions, winning a slew of them. Currently the team is completing the design of their craft. ‘We have a few working prototypes,’ said Mona. ‘They don’t look like the final product, but they’re good enough to prove the concept.’

Which, if it will work, could generate a sizeable amount of energy. Mona notes they are currently reaching a peak output of 3 kilowatts per metre of wingspan, while their initial commercial product planned for 2022 will reach 100 kilowatts for approximately 6 metres of wingspan. From this, a larger system will be built that generates 1 megawatt, lower than an onshore wind turbine, which averages around 2.5 to 3 megawatts, but interesting for remote locations and off-grid operations around the globe.

Another team betting on airborne wind is Ampyx Power from the Netherlands. They employ around 50 people to get their design in the air. Just like Skypull they are producing a fixed-wing, drone-like design. But Ampyx Power’s craft takes off with a catapult from the ground, and looks more like an aircraft. Their pre-commercial demonstrator AP3 has a wingspan of 12 metres, with two fuselages attached to it, rear rudders and a stabiliser. This test craft could generate 150 kilowatts of power.

‘This is a whole new generation of wind-energy technology,’ said Pim Breukelman, commercial director of Ampyx Power. ‘We fly an aerodynamic wing connected to a cable, that in turn is connected to a generator on the ground. We fly at an altitude between 200 and 450 metres, where we find constant and powerful winds.’

The designs of Ampyx Power and Skypull might look wildly different, but both work according to similar principles. They take off in a mechanised way, climbing using engines, until they reach a certain altitude, generally around 200 meters. There they use the lift-capacity of their wings to act more like a kite or glider, getting pulled up by the wind. The cable holding the aircraft is attached to a winch, which gets pulled out when the wind pulls up the drone. This generates rotation, and thus energy. When the winch is stretched to its limit, the drone automatically steers itself down to start the process again.

Ampyx Power will test their ninth prototype at the end of the year in Spain, which will be followed by tests in Ireland. They are also working on a 2 to 3 megawatt commercial product, for onshore, offshore and eventually floating generation of energy.

‘These aircraft can (eventually) be flown from floating platforms, and are suited for places at sea where current wind technology isn’t profitable or technically feasible,’ said Breukelman. ‘In a few years this system is supposed to be operational.’

Yet for all the advantages of the airborne version, Skypull and Ampyx Power don’t want to replace regular wind energy. ‘Our system begins where wind turbines end,’ said Breukelman, noting that their aircraft flies at higher altitudes than turbines can reach, and are complementary to them. He also says that airborne wind might be useful to extend the life of wind turbines at sea, whose foundations might serve as starting pads for airborne wind drones.

Nicola Mona agrees. ‘We will always need a mix of energy sources,’ he said. ‘There will never be one single renewable source replacing everything. We need a combination of hydro, traditional wind, airborne wind, solar and geothermal.’

In the meantime, airborne wind technology is also evolving. Until a few years ago, kite-like designs predominated, similar to large versions of the kites flown by children at the beach. But today, the fixed-wing designs, that look more like drones, are on the rise.

‘Airborne wind started out by adapting what was already flying,’ said Mona. ‘So it’s logical kites came first. But in the end fixed-wing designs offer better aerodynamics and energy potential.’

Safety is, however, something that airborne wind companies are still struggling with. If airborne wind wants to generate energy at scale they will need to let their designs fly autonomously in the wind for days or even weeks. Software systems will need to control these craft during these periods, and make them operate under changing weather conditions. And all of that without them crashing down.

‘Software is our biggest challenge right now,’ said Mona. ‘You want these systems to be fully autonomous, which isn’t easy.’

And then there’s also the regulation. Regulation for unmanned aircraft is still lagging behind in many countries, also affecting airborne wind companies.

And finally there’s the question of PR. ‘Over time we saw that people don’t like wind turbines,’ said Mona, referring to how in countries like Germany or the Netherlands wind turbines aren’t being built because of local opposition.

‘They’re big, cumbersome and have a visual impact. And airborne wind also runs the risk of a public backlash, because they fly over people’s heads. So we will need good storytelling, and an emphasis on safety, to prevent the same reaction we saw against wind turbines.’