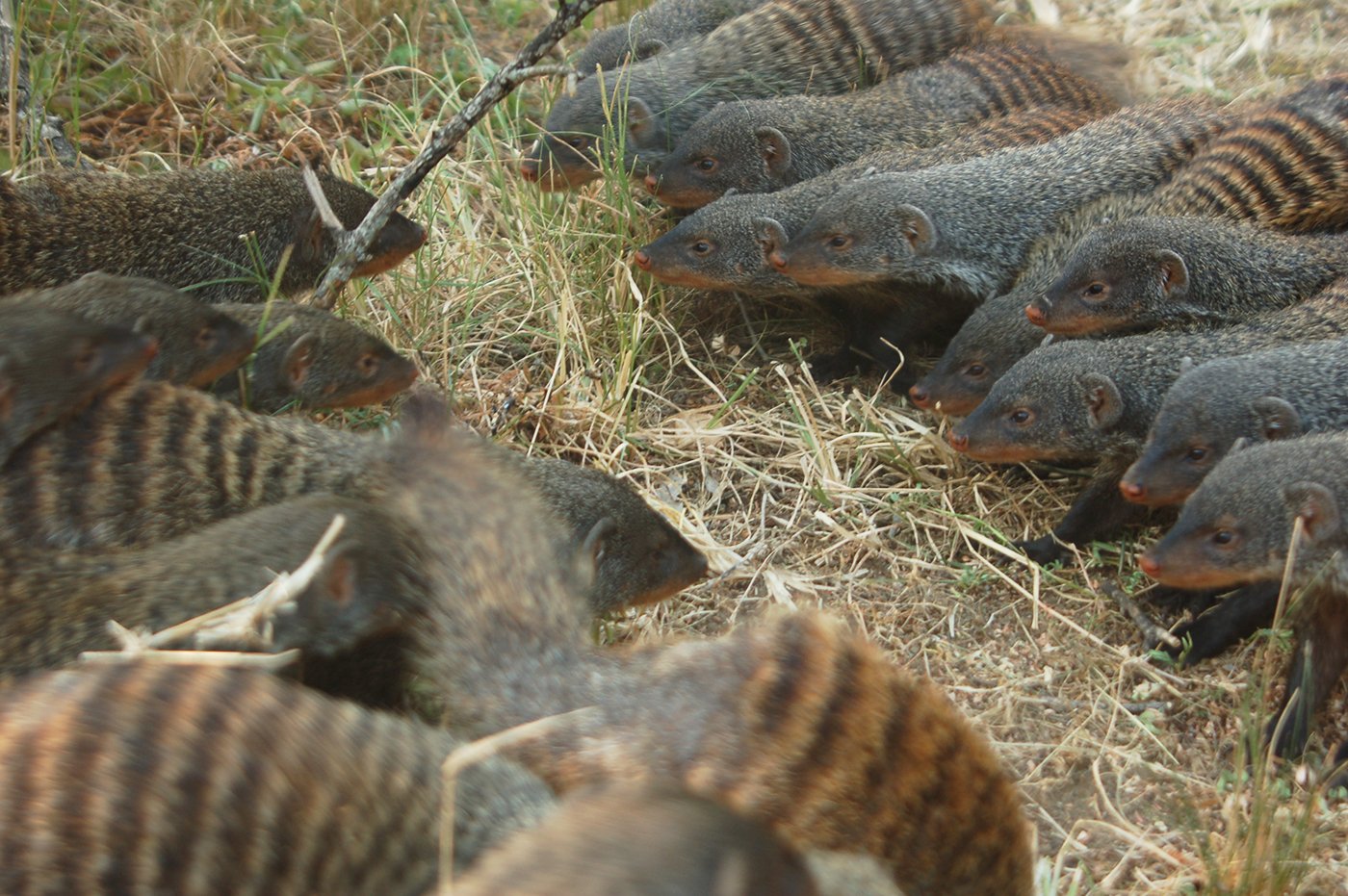 Raising children can be a tough job, especially when doing it alone, but some animals like meerkats and mongooses work together to raise their young. Studies of these cooperative creatures are revealing how this highly social behaviour evolved and is shedding light on the roots of our own species’ collaborative abilities.

Living in the flat, arid landscape of the Kalahari, meerkats are one of the most cooperative species of mammal on the planet. The scarcity of food and few places to hide from predators has led them to live in groups where they share the tasks of foraging and keeping watch.

But these diminutive animals also cooperate in ways that are rare among mammals.

Meerkats live in large families of up to 50 individuals, but only one dominant male and female will breed while their pups are fed and raised by the others in the group.

‘Only about one in six or seven female meerkats gets to breed successfully,’ explained Professor Tim Clutton-Brock, a zoologist at the University of Cambridge who has spent 24 years studying social behaviour in meerkats in the Kalahari. ‘But those that do, can produce three litters of five to seven pups a year.

‘The subordinate females lactate and guard the young at the burrow during the first three weeks of life. For the next three months these females also feed the young by giving away up to 40% of the food they find.’

The strategy is hugely successful – dominant female meerkats can produce up to 20 pups in a year, bolstering their group’s size so they can hold precious territory against rival families.

‘Our most successful female has reared 81 pups to survival during her lifespan,’ said Prof. Clutton-Brock, referring to the meerkats he has been observing.

But the evolution of this strategy makes little sense in a world where individuals are typically out to help themselves.

In most animals, the selfish drive for survival and to pass on their own genes means few will help to raise the offspring of others and in some cases, such as lions and some monkeys, they will even kill the young of rivals.

This is what Prof. Clutton-Brock and his colleagues set out to understand as part of the ambitious six-year THCB2011 project. They observed and monitored more than 700 wild meerkats from 30 different groups in the Kalahari, taking genetic and hormone samples of the animals throughout their lives.

They found that meerkats show an unusually high level of kinship to others in their groups compared to that found in other social animals such as African hunting dogs and primates. In other words, almost all members of a meerkat group are brothers and sisters.

As the meerkats within a group all share copies of the same genes, it means they also have a vested interest in ensuring that their mother’s offspring survive, says Prof. Clutton-Brock.

‘Other females can ensure the genes they share are passed on by helping to raise their siblings,’ he said. ‘It makes cooperation much stronger.’

Even so, meerkat group life is not always harmonious. The dominant female actively suppresses the sexual development of other females, who are smaller, by bullying them and expelling any that try to breed. If the dominant female dies, then the remaining females compete to take her place. They eat competitively in an attempt to outgrow their sisters and assert their dominance. Once in place, the new breeding female’s skeleton will elongate and she will put on muscle.

In other social animals, such as chimpanzees and baboons, kinship is much lower within groups. This means that higher primates, including humans, have to engage in far more social manoeuvering and alliance forming within their group, Prof. Clutton-Brock says. This Game of Thrones-style politics could have been one of the driving forces for the increases in intelligence and brain size seen in humans.

‘Most of the animals that live in groups with low levels of kinship tend to be what we would regard as cognitively developed,’ said Prof. Clutton-Brock. ‘Even humans live in groups with very low average levels of relatedness. The moral is that if you are living in a group where not everyone is closely related to you, and might be looking to screw you over if they get a chance, you need to be bright.’

Other cooperative animals have evolved different strategies to help ensure the group sticks together. Banded mongooses, the meerkats’ larger cousins, create a ‘veil of ignorance’ that helps to ensure the group work together to raise their young.

The five-year SOCODEV project followed 12 groups of wild banded mongooses in Uganda, which live in family groups of around 20 individuals. Unlike meerkats, four to six females breed at the same time.

While younger females typically mate a few days after the older ones, they synchronise their pregnancies so all the females give birth on exactly the same morning. The communal litter is then raised by the group.

‘If a female gives birth on a different day, the other females will probably kill the young,’ said Professor Michael Cant, an evolutionary biologist at the University of Exeter, UK, who has been studying mongooses since 1995. ‘Synchronising to give birth at the same moment is a way to avoid infanticide. We think none of the females know who their own pups are so they care for all of them just in case they are their own. It is a selfish act that leads to (something like) a true kibbutz.’

To examine this behaviour in more detail, Prof. Cant and his team fed half of the breeding females in each mongoose group with additional nutrient-rich food during pregnancy. They measured the growth, hormonal stress, genetic markers of aging and later behaviour of each of the offspring.

They found that while the mothers that had been fed the extra food gave birth to larger pups, they then worked extra hard to raise the offspring of mothers who had not had the extra food, levelling out the differences between them.

‘(Banded) mongooses always (seem to) do the opposite of what we think they should do,’ said Prof. Cant, whose expectation had been that pups who were bigger at birth to benefit from their head start in life, which is what happens with dogs and other mammals. Instead, the females focused on raising the runts. ‘I think it confirms that they really don’t know who their own offspring are in the litter. It pays each female to help the runt in case there is a chance it could be hers.’

Further results due to be published later this year also show that those whose mothers were not fed extra food during pregnancy may actually end up doing better in later life.

The postnatal care seems to overcompensate so that lighter pups end up being heavier adults, says Prof. Cant. ‘It seems the veil of ignorance (about parentage) that leads to the redistribution of wealth amongst these offspring is having long-lasting effects on their fitness.’

Prof. Cant believes that the findings could also have implications for testing theories of cooperation in humans. ‘Humans are cooperative breeders – our offspring are raised by grandparents, siblings as well as their parents.

‘There is also a lot of conflict both within mongoose groups and between groups. They are one of the few mammals that go to war with each other. It is easy to draw analogies with this (human evolution) as our own human behaviour is a strange compliment of cooperation and conflict.’

Previously it was believed that mole rats were born into different ‘castes’ that defined their roles within the colony for life, much like with bees and ants. Research by the THCB2011 project, which is at an earlier stage than that of the meerkats, has revealed that this is not the case.

Prof. Clutton-Brock of THCB2011 and his colleagues have been studying Damaraland mole rats, another highly cooperative mammal that live in colonies beneath the Kalahari where a single female ‘queen’ produces all the offspring.

They are focusing on 500 mole rats in the wild and another 500 in 60 captive colonies living in transparent tubes in a specially built facility in the Kalahari.

They have found that mole rats change roles through their lives and their contributions to cooperate activities, such as digging and foraging for food, increases with age. They are also seeing similar levels of kinship in mole rat colonies as they saw in meerkats.

‘Mole rats live underground so studying their social behaviour is much harder,’ said Prof. Clutton-Brock. ‘But our new facility is allowing us to do this in unprecedented detail.’