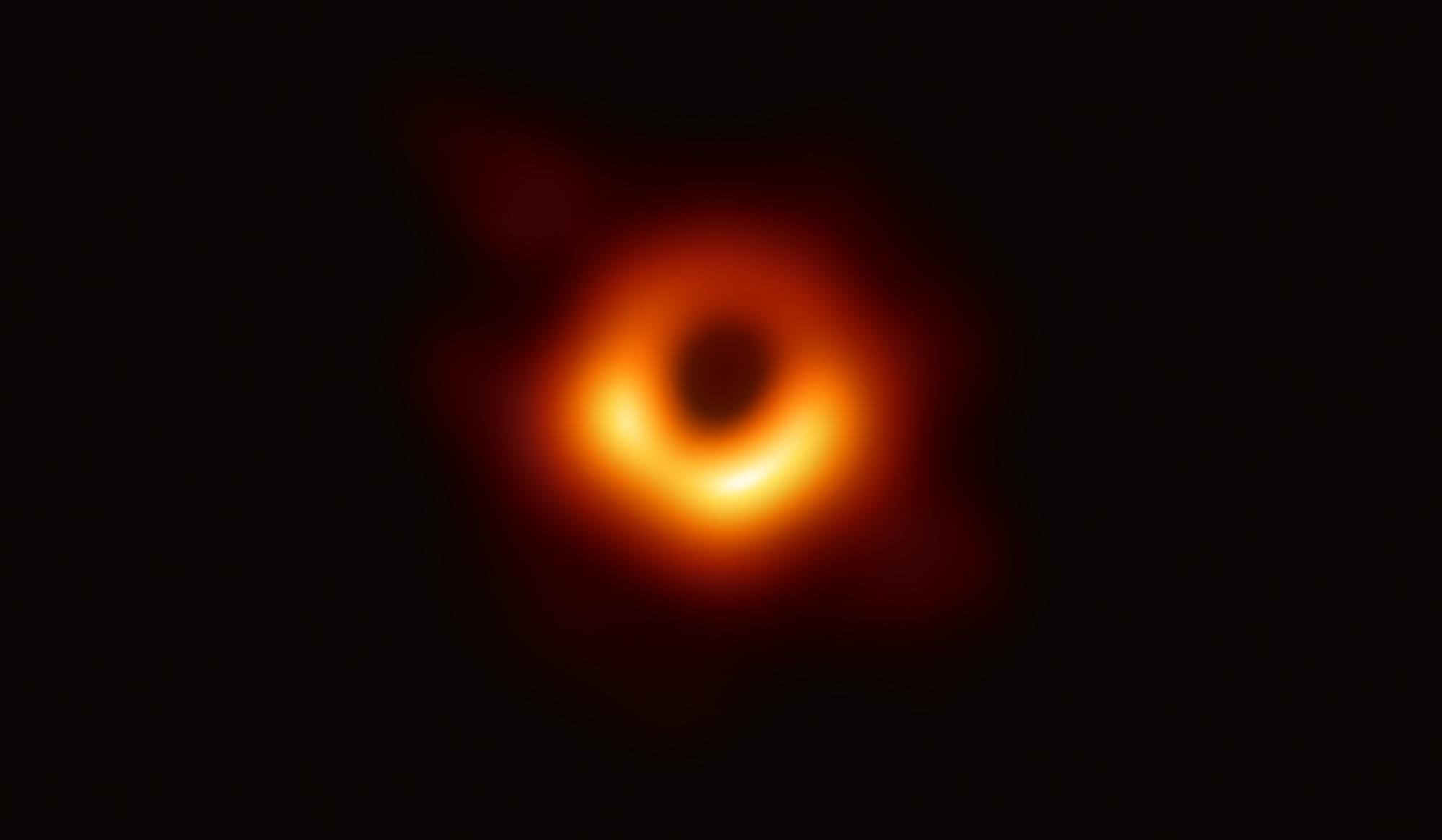 Scientists have revealed the first ever image of a black hole, a major milestone in astrophysics which not only backs up Einstein’s theory of general relativity but also opens up a new era of black hole observations.

The image shows the event horizon – the gravitational point of no return beyond which nothing, not even light, can escape – around the supermassive black hole in a nearby galaxy.

It is the first time in history that such an image has been produced and was the result of a global collaboration of scientists working on the Event Horizon Telescope (EHT) project.

‘History books will be divided into the time before the image and after the image,’ said Dr Michael Kramer from the Max Planck Institute for Radio Astronomy in Germany, one of the principal investigators on BlackHoleCam, the European contribution to the EHT. ‘It is the first time that this has been possible, and it’s been long in the making.’

The image shows the shadow of the event horizon around the supermassive black hole inside Messier 87 (M87), an elliptical galaxy located 53 million light-years from Earth. Seeing this event horizon is no mean feat; the black hole itself, while 6.5 billion times more massive than our Sun, is still incredibly small at this distance.

That is one of the reasons such an image has never been taken before. No telescope alone possesses the observational power to observe the supermassive black holes believed to be at the centre of all galaxies. Instead, the EHT project combined the power of eight large radio telescopes around the world, from the South Pole to Spain, to create an Earth-sized virtual super telescope.

‘We observed with (eight telescopes) simultaneously, so that as Earth rotates, there are three or four that are always pointing to the (black hole),’ said Dr Luciano Rezzolla from Goethe University Frankfurt in Germany, another principal investigator on BlackHoleCam. ‘We have collected (information) and built an image that we believe is consistent with what we would expect from a black hole.’

‘Of course we would have loved to prove Einstein wrong, but everything we see fits perfectly the prediction that is given by general relativity.’

But so much data was collected – 4 petabytes, or 4 million gigabytes – that it could not be digitally transferred. It had to be physically transported by sea and air before image processing could take place. It took the astronomers until summer 2018 to actually put the final image together.

The existence of black holes was first proposed following Albert Einstein’s general theory of relativity in 1915. It was suggested that if an object’s mass reached astonishingly high levels, it would collapse in on itself into a singularity, a point in space and time where gravity is so intense that the known laws of physics break down.

Since then we have found indirect evidence for black holes. We have seen regions of super-heated material swirling around suspected black holes, known as quasars, and we have seen stars orbiting the black hole believed to be at the centre of our own galaxy. We have also detected gravitational waves – ripples in space-time formed by two black holes merging. Never before, however, have we actually seen a black hole.

And the image of M87’s black hole matches our predictions for what it should look like. The shadow of the black hole is proof that its gravity is so intense that it is bending light itself, a prediction made thanks to general relativity. We can also see that the boundary between the interior and exterior of the black hole – the event horizon – actually exists, with a ring of photons of light surrounding it.

‘Of course we would have loved to prove Einstein wrong, but everything we see fits perfectly the prediction that is given by general relativity,’ said Dr Heino Falcke from Radboud University Nijmegen in the Netherlands, also a principal investigator on BlackHoleCam. ‘It’s confirmation that one of the most fundamental predictions (of general relativity) has passed the test.’

While the researchers focused on M87 for this image, the overall EHT project also has plans to try and produce an image of the black hole at the Milky Way’s galactic centre, called Sagittarius A*.

Using the same VLBI method, the team has already taken observations of this object, and will hope to produce an image in the coming year or so. While it is considerably closer than M87’s black hole at just 25,000 light-years away, it is also about 1,000 times smaller at 4 million solar masses, presenting its own unique challenges.

‘At the same time we took data from M87 we also took data from our galactic centre,’ said Dr Kramer. ‘For now we have concentrated efforts on M87, and once that is out, we will focus all our attention on Sagittarius A*.’

The scientists are also hopeful that this discovery will usher in a new era of black hole observations. The technique they used pushed the limits of modern technology, but it proved it is very much possible. By combining multiple telescopes around the world, essentially turning Earth into one giant telescope, such fascinating objects in the universe become possible to see.

The major limitation of this method is the size of Earth – we cannot build a virtual telescope on our planet larger than the planet itself. So if we want to observe black holes in other galaxies, we may have to use telescopes in space. Using three telescopes in Earth orbit, for example, it could be possible to see even more black holes in the coming decades.

‘The only way to see more of these black holes is to have a telescope that’s larger than Earth,’ said Dr Falcke. ‘And for that we need to go to space.’

How scientists turned Earth into a giant telescope

A global network of telescopes detected radio waves emitted in space. Thanks to the distance between their locations, the resolution was much higher than any one telescope could achieve alone. It was the equivalent of being able to stand in Lisbon and read a newspaper’s fine print in Moscow.

At a predetermined moment, all the telescopes recorded radio waves from the same region in the sky.

Step 3
Cleaning up the noise

A central processing facility gathered the data from the telescopes. It synchronised the different recordings using an atomic clock (above) and eliminated the noise. Despite the high resolution, the data was not complete so computer algorithms were used to fill in the gaps.

To create the image, scientists matched the radio wave frequencies from their observations to those coming from known elements in the universe that we can actually see.

Laying out the data on a virtual canvas, researchers essentially painted the image by numbers to produce the world’s first ever picture of a black hole.