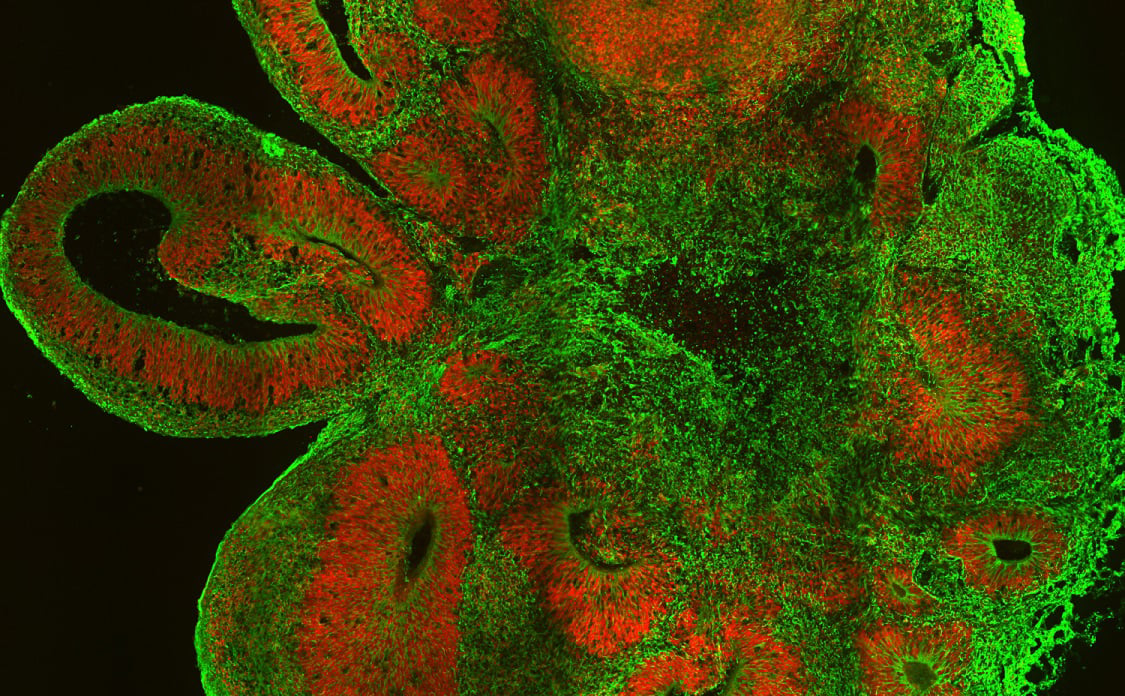 Miniature brains grown in laboratory dishes could overcome some of the problems testing drugs on animals and help researchers identify new ways to treat very human, and incurable, conditions like Alzheimer’s disease and epilepsy.

Most new drugs are developed and tested using mice as models. However, with brain disorders such as Alzheimer’s, the animals never have the full condition and instead only show some of the brain abnormalities seen in human patients. This means that while drugs can clear some signs of disease in mouse brains, they later fail to cure human patients with the full condition.

‘We are very good at identifying compounds that cure disease in animal models,’ said Professor Jurgen Knoblich, a molecular biologist at the Institute of Molecular Biotechnology of the Austrian Academy of Sciences, in Vienna. ‘The problem arises when we want to translate this into humans.’

Recent studies have shown that the brain cells we use for memory, problem solving and language arise from a cell type that does not exist in mice. ‘The brain is the one organ that is most different between humans and mice,’ said Prof. Knoblich. ‘That is why being able to test drugs directly in human model systems would be an incredible step forward.’

Pharmaceutical companies have lost hundreds of millions by investing in drugs for brain disorders that showed promise in animals but later failed in human patients. This high failure rate has led to the average cost of bringing a new drug to market to more than $1 billion (€850 million), Prof. Knoblich told the Euroscience Open Forum (ESOF) in Toulouse, France, earlier this month.

He is particularly interested in epilepsy and microcephaly – a brain development disorder which leads to babies being born with small heads. His lab has developed an alternative way to these diseases – by generating mini human brains.

Prof. Knoblich grows these mini-brains, also known as brain organoids, using skin cells taken from patients with epilepsy and microcephaly, which are tweaked so that they revert to an embryo-like state. He then coaxes these so they develop into brain cells in a dish.

The resulting brain tissue shares the same DNA and disease-causing mutations as the patient. The mini-brains even show signs of their disease, such as reduced brain tissue in microcephaly. Dozens of the white mini-brain clumps fit inside a single growth plate that Prof. Knoblich can hold in the palm of his hand.

‘We were stunned by how similar (the) events in these brain organoids were to what is known to happen in a (human) embryo brain,’ said Prof. Knoblich. ‘The mini-brains have an architecture that resembles an embryo brain, though the structure is quite jumbled up.’

These tiny lab-grown organoids offer a new way of testing drugs on brain tissue that is similar to that found in a living patient.

‘A pharmaceutical company might be able to grow thousands of these organoids and then test a lot of compounds in them,’ said Prof Knoblich.  ‘This is three-dimensional human tissue, with human physiology.’

He warned, however, that the brain organoids, as he prefers to call them, are not like adult brains, but rather pieces of brain tissue. The mini-brains cannot perceive or think or do anything that resembles consciousness, but they could show us the way to cure troublesome and common brain disorders.

‘A pharmaceutical company might be able to grow thousands of these organoids and then test a lot of compounds in them.’

One disease that could stand to benefit from such an approach is Alzheimer’s. Despite hundreds of potential treatments for Alzheimer’s disease being tested in clinical trials, there are still few successful drugs against this devastating condition.

By allowing drug companies to see the effect of their compounds directly on human tissue, laboratory-grown mini-brains promise to greatly speed up the search for new treatments.

Scientists working on a project called STEMMAD are using mini-brains to research Alzheimer’s, as well as Parkinson’s disease and frontemporal dementia.

They are producing the mini-brains in two ways. One, similar to Prof. Knoblich’s work, is to use skin cells from a patient with a certain condition to grow brain tissue with the DNA mutation that carries the disease. They have also used gene editing to fix these mutations, meaning they can produce tissues with and without the disease in order to compare the samples.

The other is to grow mini-brains from anonymous healthy people and then edit in the disease. The advantage of this method is that it avoids some of the ethical and data protection issues that arise when dealing with specific patients, and more easily allows the mini-brains to be used by pharmaceutical companies for research.

Professor Poul Hyttel, a stem cell scientist at the University of Copenhagen, in Denmark, and coordinator of the STEMMAD project, said: ‘The companies will be able to offer the biomedical industry different brain cell lines that they could test different compounds on and see how they affect the disease. We hope these human neurons will serve as a much better model than the rodent models.’

Already, the project has tested a number of drugs on two-dimensional and three-dimensional mini-brains grown in this way that carry mutations linked to Alzheimer’s. These results are expected to be published later this year.

Prof. Knoblich believes developing cerebral organoids could help to drive down the cost of drug development and have major impacts on health research in general.

‘The cost of pharmaceutical research has gone up exponentially and has led many big pharma companies about five to 10 years ago to shut down their neuroscience programs completely,’ he said. ‘We should think about what that means for human health.’

He now hopes to grow brain tissue that will help give researchers a greater insight into common psychiatric disorders such as epilepsy, autism and schizophrenia.

‘I’m convinced we are going to see a complete revolution that might actually end in a situation where biology and medicine are no longer separate disciplines,’ added Prof. Knoblich. ‘There is hope for new drugs and for new treatments.’