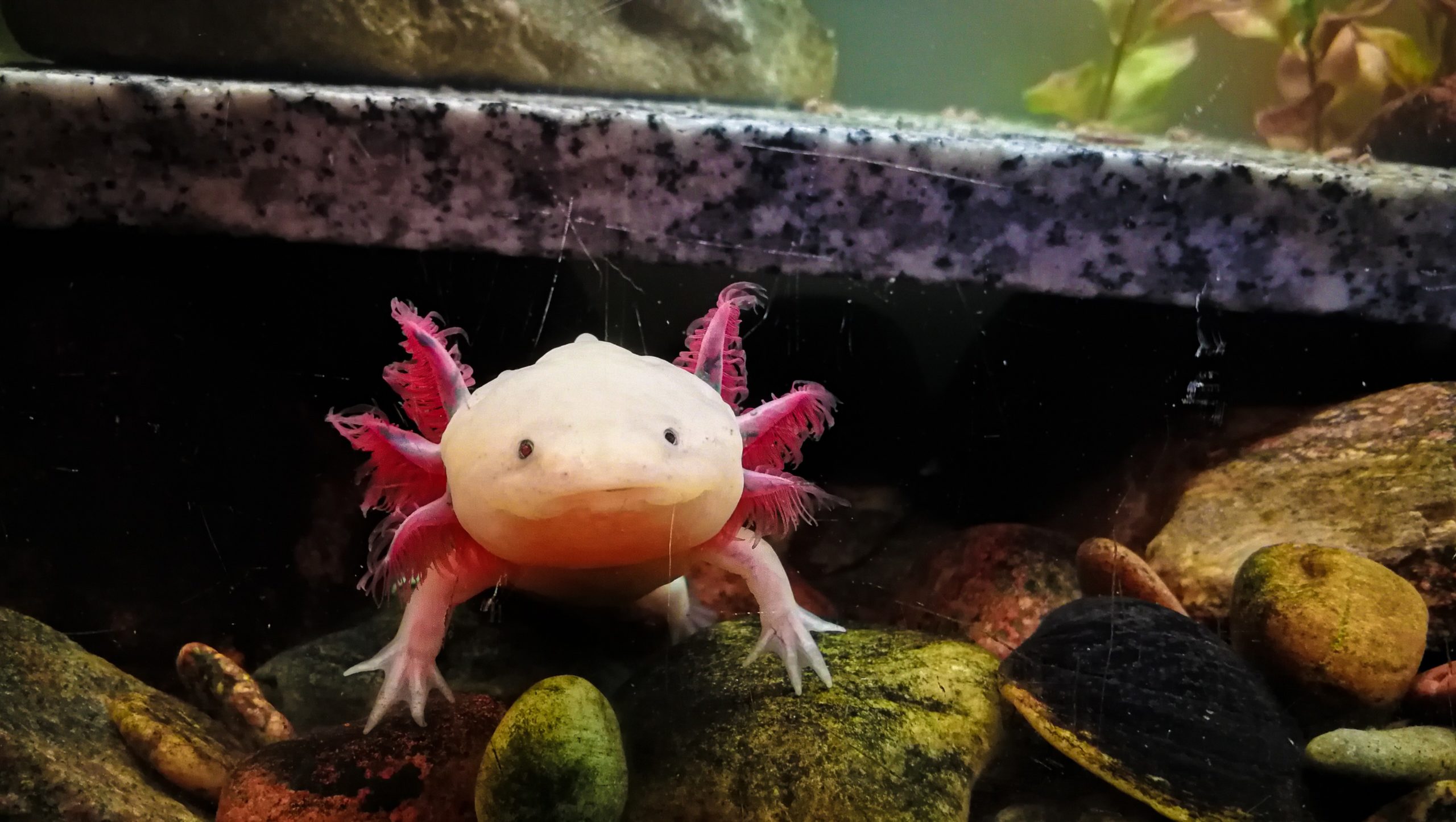 Regenerating lost body parts is impossible for humans, but cracking the cellular code of salamanders could help to treat serious wounds.

Salamanders are remarkable creatures. If one of these amphibians loses a finger, it grows back. Furthermore, if you chop away a piece of heart or spinal cord, it will regenerate. Perhaps most impressively, they can even regrow a leg bitten off by a hungry predator.

One of the most famous salamander species is the axolotl (Ambystoma mexicanum), which is found in lakes near Mexico City.

The axolotl is a veritable Peter Pan of salamanders. Even the 30-centimetre-long reproductive adult retains features of its youthful phase throughout its lifecycle.

The prominent gills protruding from the back of its head are retained from the axolotl’s larval phase. The fact that it never leaves the water throughout its life is unusual for an amphibian.

Axolotls were named after the Aztec god of fire Xolotl who, legend has it, disguised himself as a salamander to avoid being sacrificed. Today, scientists study axolotls in their laboratories because of their amazing ability to regrow one or even two limbs.

‘I’m still fascinated by how the limbs regenerate,’ said Professor Elly Tanaka at the Research Institute of Molecular Pathology in Vienna, Austria, who has studied salamanders for almost two decades.

Her lab focuses on the distinctive axolotl species but ‘All salamanders people have studied seem to regenerate limbs,’ she remarks.

As part of the EU-funded RegGeneMems project, Prof Tanaka is trying to unravel the mystery behind how molecules command cells inside the injured axolotl to develop and move, thereby restoring an entire limb in the right proportion and size.

This regeneration is possible as far as the shoulder, and it happens as if the animal was first growing a limb.

While it remains within the realms of science-fiction for a person ever to regrow an arm or a leg, researchers believe that the salamanders can offer insights into how patient injuries might be better treated.

‘When they lose a limb, or even two limbs, they’re still pretty mobile because they can swim around using their tail,’ said Prof Tanaka.

‘The lesson from the salamanders is that you use very much the same molecular machinery that you do during the development of the limb,’ said Prof Tanaka. With lessons from the axolotl, we could therefore boost our own injury-repair kit.

Once an axolotl limb is lost, a blood clot forms at the site of the wound. Skin cells move to cover the wound within a day. Then the tissues underneath start rearranging, first forming a jumbled mass of cells – a blastema – that seems to lack any organisation.

A blastema is a mass of undifferentiated cells that has the capacity to turn into an organ or appendage. It is particularly important in the regeneration of severed limbs.

In human wounds, scar tissue is formed by glue-like cells called fibroblasts. In salamanders, something amazing happens as, within weeks, these cells take a step back in time to become less specialized.

They regain enough flexibility to become bone, ligament, tendon, or cartilage. Then, they shoot each other signals that direct the reconstruction of the missing body part from the stump, growing an exact replicate.

Prof Tanaka recently discovered how some crucial signals help with the arrangement of cells and tissues from what looks like a confused jumble.

She discovered that cells in the regenerating tissue that come from the thumb side of the limb start to produce different signals than cells from the pinky-finger side.

‘The thumb side produces FGF-8 (fibroblast growth factor), and this tells the pinky-side cells that they need to produce Sonic Hedgehog,’ said Prof Tanaka.

Named in honour of the famous Sonic the Hedgehog videogame character, the Sonic Hedgehog signalling molecule (SHH) is crucial to embryonic development in animals and humans.

Another signal molecule, also found in people, is FGF-8, which also has a role in tissue repair and development.

Together, FGF-8 and SHH stoke pro-growth conditions inside the damaged limb and help direct the jumble of cells in the blastema.

‘You need cells from the pinky and thumb side of the limb to come into this blastema, and so you have all the cell types that you need to rebuild,’ said Prof Tanaka.

Another scientist intrigued by axolotls is cell biologist Dr Sandra Edwards at TU Dresden. She became interested in salamanders after attending a research course in the US during her PhD in Chile, redirecting her career.

She applied to join the lab of Tatiana Sandoval-Guzmán, an eminent researcher of axolotl limb repair at the Centre for Regenerative Therapies Dresden (CRTD).

‘The more I heard about salamanders, the more I became fascinated,’ recalled Dr Edwards, who hopes her research can one day go to help patients.

In the ProDistReg project, the Marie Skłodowska-Curie Actions (MSCA) fellow Dr Edwards, studies how differences in tension within tissues may influence the repair and help the animal turn what seems like cellular chaos into a perfectly functioning limb.

She became intrigued with the fact that limb regrowth takes a similar amount of time, regardless of the amount of tissue being replaced. This means limbs must grow faster when more tissue is removed.

‘My hypothesis is that tension or stiffness is higher in tissues that grow slower,’ she said.

It may seem surprising, but the mechanics and rigidity of tissues can influence their development and regeneration as well as pathologies like cancer.

There is a web-like network called the cytoskeleton inside cells. This can sense external pressures when compressed, which opens entry points (akin to postal boxes) to the nucleus of a cell, allowing molecular messages to flow in and turn genes on and off.

‘In our system, we have observed that during limb generation in the axolotl, tissues that are closer to the body are softer and grows faster than tissues that are further away from the body on the end of a limb, for example, which are stiffer.’

Knowledge about tissue stiffness could help injured patients. While conceivably such patients might be treated with stem cells delivered in a matrix, the pressures within the patient’s tissues may prove important.

‘It may be that the tissues and their cells on different parts of the body behave differently, even within the same structure such as the arm, such as upper and lower arm, said Dr Edwards. Therefore, in regenerative medicine, where cell-containing matrixes are transplanted into large wounds, such scaffolds may need to be different, depending on where in the body they will be placed.

Though Prof Tanaka spends most days studying the molecular mechanics of axolotl repair, she too foresees future benefits to injured patients. But salamanders and mammals develop differently.

In mammals, like ourselves, when we first develop an arm, this happens at a tiny scale in an embryo. The salamander is different. It seems to contain a bud capable of developing into a large adult arm.

‘We are not going to be able to ask a human cell to do this, because it’s wired to work at tiny scales,’ said Prof Tanaka. ‘But we might be able to produce a group of human stem cells that regenerate like an axolotl.’

This could be extremely beneficial, for example, to people who suffer extensive burn wounds. Repair of this skin currently does not give a person sweat glands, hair follicles and other cell types, but lessons from the salamander could make this possible.

‘Resetting these fibroblasts – which the axolotl does – could be quite relevant to better healing in very large wounds, such as from burns,’ Prof Tanaka said.

Research in this article was funded via the EU’s European Research Council and the Marie Skłodowska-Curie Actions (MSCA). This article was originally published in Horizon, the EU Research and Innovation Magazine.