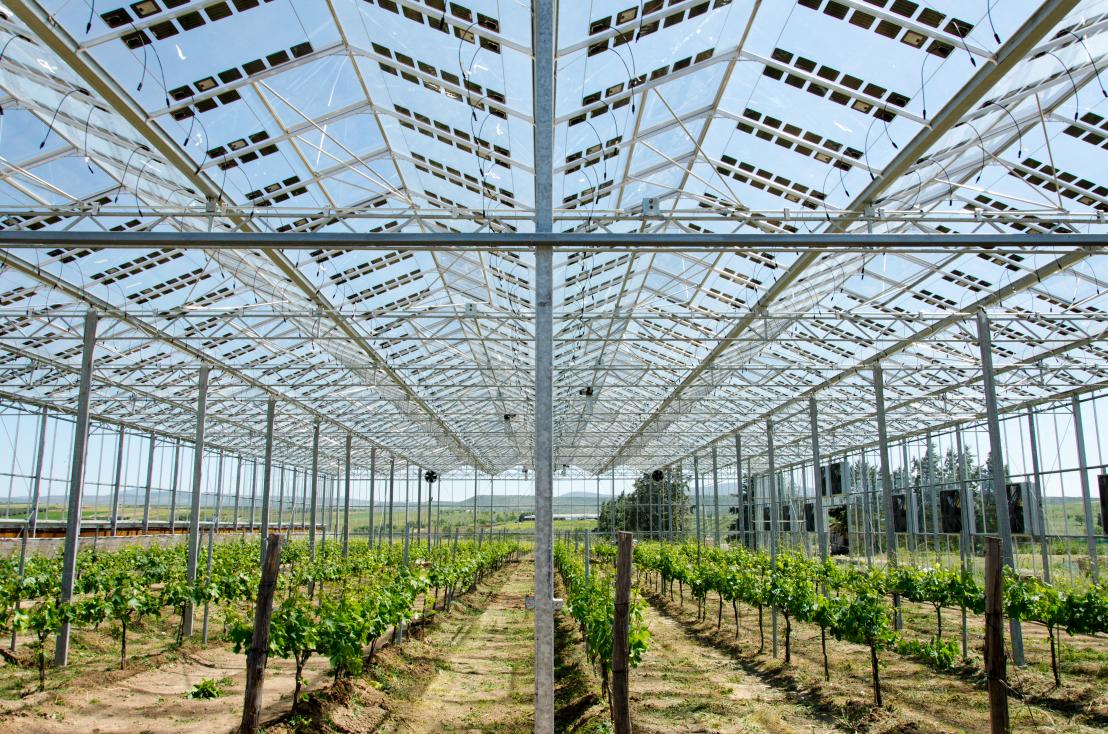 Power above, crops below. What a bright idea! Researchers are testing the effectiveness of growing crops under solar panels.

A mix of aromatic herbs and flowers is being grown at a photovoltaic park on mainland Greece. In Spain, artichoke and broccoli are sharing fields with solar panels. In Belgium, panels have been installed right on top of pear trees and sugar beets.

These are examples of agrivoltaics – a new sustainable solution that is gaining ground. Pilot projects are popping up across Europe to shed light on how harvesting sunshine on farms could be a win-win for agriculture, especially small-scale farmers looking for ways to boost yields while using less energy and water.

According to the United Nations, the water-food-energy nexus is key to our societies being able to develop sustainably. Demand for all three is increasing, driven by a rising global population, rapid urbanisation, changing diets and economic growth. The United Nation’s data also reveals that the largest consumer of the world’s freshwater resources is now agriculture, and more than one-quarter of the energy used globally is expended on food production and supply.

The world will be home to an astonishing 10 billion people in the next 30 years. Not only is that a lot of people, it’s also a lot of mouths to feed – far too many for today’s farms to satisfy. In fact, feeding this future population will require that we somehow produce twice as much food as we do today – a proposition that is rife with challenges.

First, there’s the challenge of where to grow more crops. Out of the 13 billion hectares of land on this planet, only 38% is available for farming. Increasing that area would likely mean turning forests – including rainforests – into cropland, resulting in a major loss of biodiversity. And because trees play an essential role in fighting climate change, such deforestation would also lead to an increase in greenhouse gas emissions.

On top of deforestation there’s also the challenge of pollution, with agriculture being responsible for at least 10% of the world’s greenhouse gas emissions. These largely result from methane produced by livestock, the sector’s use of nitrogen-based fertilisers (which cause nitrous oxide, a potent greenhouse gas, 300 times more powerful than carbon dioxide), and fossil fuel dependent farm machinery and transport.

Agrivoltaics could be the answer

Despite the EU’s target to produce 30% of its energy from renewables by 2030, nearly every stage of food production currently relies on gas and oil. That being the case, any increase in food production would most certainly mean an increase in fossil fuel use and, as a result, greenhouse gas emissions.

Agrivoltaics could be the answer. Considering that crops need sunlight to grow, farms can use the sunshine to power their production processes. Afterall, farm fields tend to be large open spaces that are exposed to a lot of sunlight. So why not install solar panels?

‘Unfortunately, solar panels take up space,’ answered Ilse Lenaerts, who manages the science, engineering and technology facility TRANSfarm which supports KU Leuven research groups. ‘As this space can no longer be used to grow crops, they can decrease a farm’s overall yield.’

But all is not lost. ‘Agrivoltaics aim to allow food production to continue on the same land used for solar panels,’ explained Lenaerts.

With the support of the HyPErFarm project, the KU Leuven team is working to advance the use of agrivoltaics, turning it from an innovative concept into a viable market solution. ‘We want to make an indisputable business case for why farmers should produce and use renewable energy on their farms, and why agrivoltaics is the best way of doing this,’ she said.

As for the production component, the project has developed a unique technique for installing solar panels in farm fields. Instead of placing the panels on the ground, HyPErFarm installs them above the crops, as a canopy of sorts, or aside to the crops, as a protective windshield.

‘By placing the solar panels over the crops, no farmland is lost, meaning solar energy can be produced without impacting yields,’ noted Lenaerts. ‘The panels also provide the crops with shade and protection from adverse weather conditions, both of which can also contribute to increased yields.’

With the solar panels in place, farmers can produce the energy needed to power much of their farm’s operations (e.g. lights, heating and cooling). This in turn reduces costs – and carbon emissions. HyPErFarm is also exploring ways of using this solar energy to produce clean hydrogen, which could then be used to power farm machinery and equipment.

‘Agrivoltaic systems open the door to the complete electrification of farms,’ added Lenaerts. ‘Not only will this benefit farmers in terms of yield size and costs, it also ensures that agriculture does its part in helping Europe meet its climate goals.’

Let the sun shine in

That’s unfortunate as greenhouse-based farming produces 10 times the amount of food grown in the open field. ‘The problem is that producing this amount of food requires 10 times more energy than what an outdoor field needs,’ he added.

The Brite Solar CEO believes the key to decreasing a greenhouse’s energy use is to increase its use of solar power. And to do that, his company, with the support of the PanePowerSW project, has invented what it calls solar glass: a transparent panel for greenhouses that looks like a normal window and can simultaneously let sunshine in and produce solar power.

The secret to the solar glass’ dual function is an innovative nanostructured coating. ‘The nano coating only absorbs the UV light, which is useless to the plants and the solar cells,’ Kanopoulos explained. ‘The coating then transforms this UV light into what is called the red spectrum of light, which plants use to grow, and solar cells use to produce energy.’

To demonstrate just how big of a gamechanger this application is, Brite Solar built a 1,000 square metre greenhouse for a vineyard in Greece. Completely covered with nanostructure-coated solar cells, the greenhouse can produce 50 kW of power – enough to meet nearly all the greenhouse’s energy needs. ‘For the first time in agricultural history, we reported a negative carbon dioxide footprint per kilogram of crops produced,’ he said.

But the demo greenhouse is about more than just producing power. It’s also about increasing yields. In fact, it’s aim was to double the vineyard’s yield over what can be achieved by a comparably sized outdoor vineyard.

Here, greenhouses have a particular advantage over farm fields: they can produce crops year-round. For instance, the greenhouse vineyard in Greece is producing two harvests, one in the autumn and a second during the winter. This is an excellent, and relatively easy, way of increasing yields without having to create more crop land, which could ultimately mean less deforestation.

‘All of this has profound environmental implications and points to a new way of farming – one that is fully electric, runs on renewable resources, and capable of sustainably producing the food we need to feed the future,’ concluded Kanopoulos.

In doing so, projects like PanePowerSW and HyPErFarm support such important EU policies as the Farm2Fork initiative, accelerating Europe’s transition towards a sustainable food system.