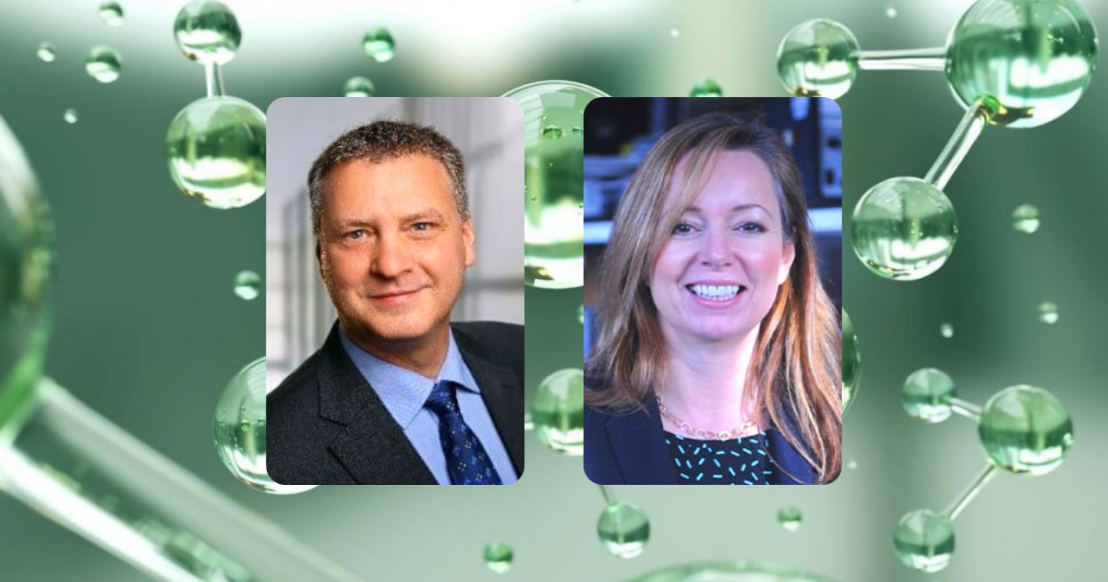 The inspiration to use Earth’s abundant supply of water as a source of hydrogen fuel is not new. But will it fuel the future? Meet two leading European innovators who are championing clean hydrogen as a key solution in building de-carbonisation strategies.

Hans Marius Schuster comes from Germany’s car capital Stuttgart (one of the country’s most polluted cities). Michaela Kendall grew up in a chemical factory town in the north-west of England. Today they are on a mission: to increase the cost-competitiveness of clean hydrogen.

‘Almost everyone in the town worked at the factory. My father worked there too. But even if it was clearly a source of benefits, I realised there was tension between the chemical industry and the environmental degradation,’ recalled Kendall. ‘I couldn’t understand why. I felt there should be green growth opportunity in clean tech. I strongly believe that environmental science is not just about protection. It’s also about conservation of resource, and that means cost savings.’

For Schuster, his career in the automotive industry was the spark that led him on the path of hydrogen fuel cells. ‘I started out as an IT engineer from Stuttgart, and was later based in Japan – that’s how I learned about hydrogen fuel cells,’ he said. ‘That’s how I developed my own idea to combine the two worlds: the digital world and the fuel cells and hydrogen world.’

Today, Schuster is creating a digital platform he describes as the ‘H2 Metaverse’ to facilitate the standardisation of hydrogen fuel cell technologies via digital twins. And, Kendall, who started out as an environmental scientist, is demonstrating real-world benefits of successfully scaling up green hydrogen technologies like fuel cells.

Produced by splitting water using renewable energy, clean hydrogen (also referred to as green hydrogen) is at the forefront of science and sustainability. It’s a sought-after energy as it does not create air pollution when used as a fuel (or carbon) at the point of use.

‘It feels like we are in the eye of the storm, it really does,’ said Kendall. ‘It’s absolutely the right time to be in fuel cells and hydrogen. It’s actually a validation of what we thought so many years ago when we first started.’

Counting 30 years in the hydrogen economy, Kendall is the CEO of Adelan (Birmingham, United Kingdom), which is one of the world’s earliest fuel cell businesses. Her company is working towards commercialising a clean energy technology that Kendall co-invented in the early 1990s.

‘It’s definitely a fantastic space,’ added Kendall. ‘It was obvious and inevitable back then, and every day it becomes more obvious and more inevitable.’

For hydrogen champions like Kendall, there is just as much excitement today as there was 20 years ago when the European Commission unveiled its ambitious ‘hydrogen vision’. Romano Prodi, President of the European Commission at the time, announced plans to reduce Europe’s dependence on imported oil by transitioning from a fossil fuel-based to hydrogen-based fuel economy.

From pipe dream to reality

Hydrogen represents a modest fraction of the global and EU energy mix. But with investments booming, hydrogen could be the next contraption for both climate protection and the economy. This was made clear at the 26th UN Climate Change Conference (COP26), which wrapped up in Glasgow, Scotland, last month.

‘Our job now is to scale the hydrogen economy from the ground up, and our main objectives are to improve the quality of our cities, improve the health status of people, and reduce emissions of carbon and move towards net zero,’ said Kendall.

The possibilities seem endless for green hydrogen power. However, developing a clean hydrogen economy requires growing supply and demand in tandem. Success hinges on the potential to produce large quantities of electrolytic green hydrogen. Cost reductions and scale-up are just as important. And it’s within reach.

‘It feels like we may be at a sort of tipping point where hydrogen could really pick up,’ she added. ‘But I also think it’s important to recognise that the current narrative is not quite right publicly. We need to start talking less about hydrogen and the fuel and more about the technologies and the hardware. For me, it’s the technology that harnesses the fuel that is more important.’

The EU has taken the lead. It is investing in new-generation electrolysers (the machines that split water into hydrogen and oxygen), making it the global leader in patents and publications on this technology. Establishing a framework for a global hydrogen economy is a top EU priority. It’s also paving the way for innovative partnerships, coordination and standardisation.

The race to successfully scale up

While interest is skyrocketing in Europe and beyond, there’s still a long way to go. Green hydrogen currently accounts for less than 1% of all hydrogen production. One of the biggest hurdles to overcome is scalability.

‘We have the technology, we have the electrolysers and the fuel cells,’ explained Schuster, noting that all you need to produce green hydrogen is water and a big electrolyser and renewable sources of electricity. Storage is another big issue to address. Currently, it’s too expensive and inefficient for widespread use in vehicles, for instance.

According to Schuster, most of the infrastructure and rules required to support the transition need to be set and scaled up, as proposed by the European Commission in December 2021.

As the founder and CEO of Arena Innovation, Schuster is using his new platform as Mission Innovation Champion to advance the energy and digital transition for the fuel cell and hydrogen domain. ‘Before the pandemic, I used to travel a lot to China and I realised that people want to cooperate. For cooperation you need communication, but as long as the digital tools used are not interlinked the communication and the cooperation are inhibited,’ he said.

Digital sector coupling is key. ‘We need to make a new digital platform and then work on it together. We do this all the time in the automotive industry,’ explained Schuster. ‘Cars are built in Germany with many parts that come from China. For the parts to fit, there is standardisation. This is crucial. So why not apply the same mechanism for the digital world?’

The next generation of data infrastructure has a name: Gaia-X. It’s a project initiative by Europe for Europe and beyond. Initiated by Germany and France in 2019, Gaia-X is the result of a multitude of individual platforms that all follow a common standard. So, what emerges is not a cloud (like Amazon Web Services, Azure or the Google Cloud Platform), but a networked system that links many cloud services providers together. The ecosystem consists of three architectural layers that are interconnected: the data ecosystem, the infrastructure ecosystem and the federation services.

‘This is how we are building up the so-called digital data infrastructure,’ said Schuster. ‘And the H2 Metaverse is a standardised data space for the green and low-carbon fuel cell and hydrogen domain based on the next generation of Gaia-X data infrastructure for an open, transparent and secure digital ecosystem where data and services can be made available, collected and shared in a trusted manner.’

The big question now is whether green hydrogen will ever be able to compete with other energy sources, or with grey hydrogen produced from fossil fuels. While there’s no silver bullet, for Schuster and Kendall, green hydrogen is certainly the end goal.

For now, the race is on. The following years will see epoch-making developments for the climate and for the future of a competitive hydrogen economy that meets all our expectations.

‘There’s no real excuse to generate air pollution – we’ve generated enough,’ said Kendall. ‘We’ve known for decades how to avoid it. Now the question is how we do it at scale. For me, it’s important to make things visible. It’s important now to provide people the products, and to let them experience it. It’s time to raise awareness and demonstrate beyond proof of concept.’

‘To this end, SMEs are developing highly efficient and sustainable machines for the fuel cell hydrogen industry, which relies on the use of artificial intelligence technologies that play a key role in the success of today’s hydrogen economy,’ concluded Schuster.