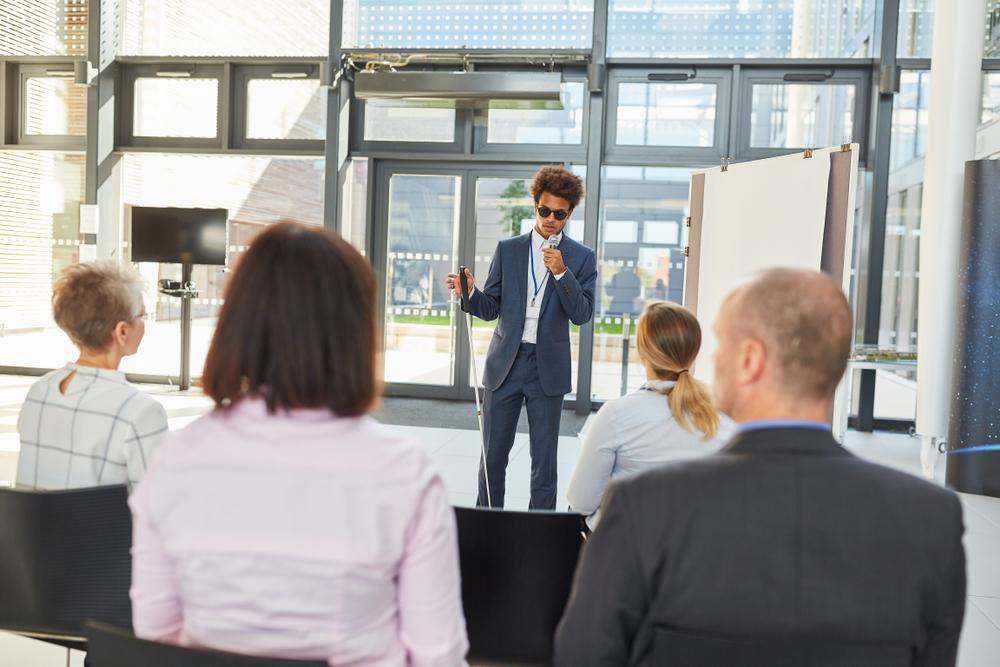 Advances in assistive technology have removed many access barriers for people with vision loss. But it’s the development of visual prosthesis that has the potential to offer a whole new way of ‘seeing’ the world.

The incredibly complex structure of the human eye – with more than two million interacting parts – makes restoring someone’s sight a formidable challenge. But it’s not an impossible one, as the bionic eye, or visual prosthesis, to use the medical term, featured for decades in sci-fi fantasy films and TV shows, is now a reality.

‘Enabling a patient to see again is our dream. A dream that we believe can come true,’ said Serge Picaud, director at Institut de la Vision, a leading research centre on eye diseases in Paris, France.

As a world leader in the development  of prostheses concerning the retina (a layer of cells at the back of the eyeball and which are sensitive to light), Picaud is coordinating ENTRAIN VISION, a network of experts from all key disciplines related to visual restoration – from neuroscience and engineering to pathology and machine learning. Together with 15 early-stage researchers, they are working on novel technologies for restoring patients’ vision.

‘It may sound a little like science fiction,’ said Picaud, describing the prostheses at the retinal and cortical level (cerebral cortex or outermost layer of the brain).

‘Currently, there are no commercial cortical prostheses, so this research provides a major opportunity to develop them, and we have a team working on this,’ he explained.

For millions of patients who are losing their sight or are already blind due to a damaged connection between the retina and visual cortex, a cortical prothesis is the only option.

The idea to electrically stimulate the human visual system is not new – it was first described more than 200 years ago. But rapid advances in neural engineering and micro-electronics have paved the way for more advanced cortically-based visual prosthetic devices.

‘The idea is to use a type of electronic device to electrically stimulate the remaining nerve cells. So, after having lost part of the “circuit”, you replace it with an electronic device,’ said Picaud.

One of the ENTRAIN VISION partners recently implanted a microelectrode array composed of 100 microneedles into the visual cortex of a blind woman. With the implant, she was able to identify lines, shapes and simple letters. ‘These results are very exciting because they demonstrate both the safety and efficacy of this technology and can help to achieve a long-held dream of many scientists: to transfer information from the outside world directly to the visual cortex of blind individuals, restoring a rudimentary form of sight,’ explained Picaud. ‘This work is likely to become a milestone for the development of new technologies that could help to transform the treatment of blindness. However, more studies are still needed.’

The use of electrostimulation to recover an individual’s sight is just one novel approach being studied, but there are others.

Developed in the 2000s, optogenetics is a biological technique that uses light to controls nerve cells or other cell types.

‘There is already one patient in France who can see using this,’ highlighted Picaud.

The patient Picaud refers to was diagnosed with the neurodegenerative eye disease retinitis pigmentosa, which affects more than two million people worldwide destroying their retinal photoreceptors. Thanks to groundbreaking research with Gensight Biologics, the patient’s sight has been partially restored using light-sensing proteins first found in algae.

The third exciting technology that researchers have set their sights on is virtual reality.

‘In Paris we have a setting like a movie theatre (Streetlab) where we can test a patient’s vision,’ explained Picaud. ‘It could be, for example, a room full of obstacles. So, once the patient has a device implanted, we can test it using this platform. However, it’s not easy to validate a device in other centres outside of Paris, because the platform cannot be easily recreated elsewhere due to its size. This is where virtual reality steps in.’

For instance, a virtual reality headset can allow users anywhere in the world to experience the same conditions as those in the Paris theatre. ‘It can also help us understand what the most important parts of an image are for a patient so that they can recognise their friends or ways to move about a room,’ added Picaud.

Such technologies will help people suffering from loss of sight to regain their independence. But what happens if both sight and hearing – our two most important senses – are severely impaired?

Solutions for life without light and sound

For the millions of people who live with deafblindness, the sense of touch is central for perceiving and interacting with the world.

‘Being informed and able to communicate are central to everything we do, but you cannot interact with your environment if you are unable to gain information about it or communicate with people and your surroundings. So, we focused on improving communication for people with deafblindness,’ noted Nasrine Olson, senior lecturer at the University of Borås and coordinator of the SUITCEYES project.

The result was a smart, tactile interface that extends the perception and spatial orientation of the user, making it possible for them to interact with others. The technology was nominated for an Innovation Radar Prize.

Describing the ins and outs of the technology, Olson said: ‘First, our “haptic intelligent personalised interface” also known as HIPI captures the environment using computer vision and sensor technologies. The camera, sensors and computer vision algorithms collectively detect and recognise objects, scenes and faces. An object can be “a chair” or “a cup”, a scene can be “a corridor” or “an office” or “a bathroom”. The system also detects faces and whether they are known to the user or not. The sensor technologies also observe the distance between things.’ If the user is looking for their cup of coffee, for example, the HIPI will observe that it is on a table three metres away, to the left of the user.

Once the platform has all of this information, what does it do with it? How do we communicate this information to the person who needs it? ‘We have created haptograms, for conveying messages to the users. A haptogram is basically a haptic pattern that carries a meaning, for example “happy” to the user. It does this by using vibro-tactile actuators, which are small electronic devices that vibrate. They can be placed on different parts of the body,’ explained Olson.

Various prototypes have been developed that integrate the technology into clothing. ‘This includes a range of vests, as well as a dress to show how the technology can be worn while looking fashionable,’ said Olson. There’s also a version called “chairable” that can be mounted onto the back of an office chair to convey messages to the person seated.

The possibility of smart wearables and soft interfaces that enable people with deafblindness to obtain information about the environment will facilitate independent living. The project even added a Covid-19 feature that allows facial recognition with masks.

New features include the ability to send the same haptic information to multiple people at the same time, whether close-by or across long distances.

‘This was tested by our colleagues in the Netherlands by sending haptic messages to colleagues in Germany,’ said Olson. But what’s truly unique about the project is its holistic approach that included extensive user and policy studies, network building, technological innovations and gamification for enriched user experience and learning possibilities.

While it’s likely to be some time before the benefits of this technological breakthrough are widely experienced, the future prospects are exciting. In the meantime, researchers continue to envision a future where sight can be restored.