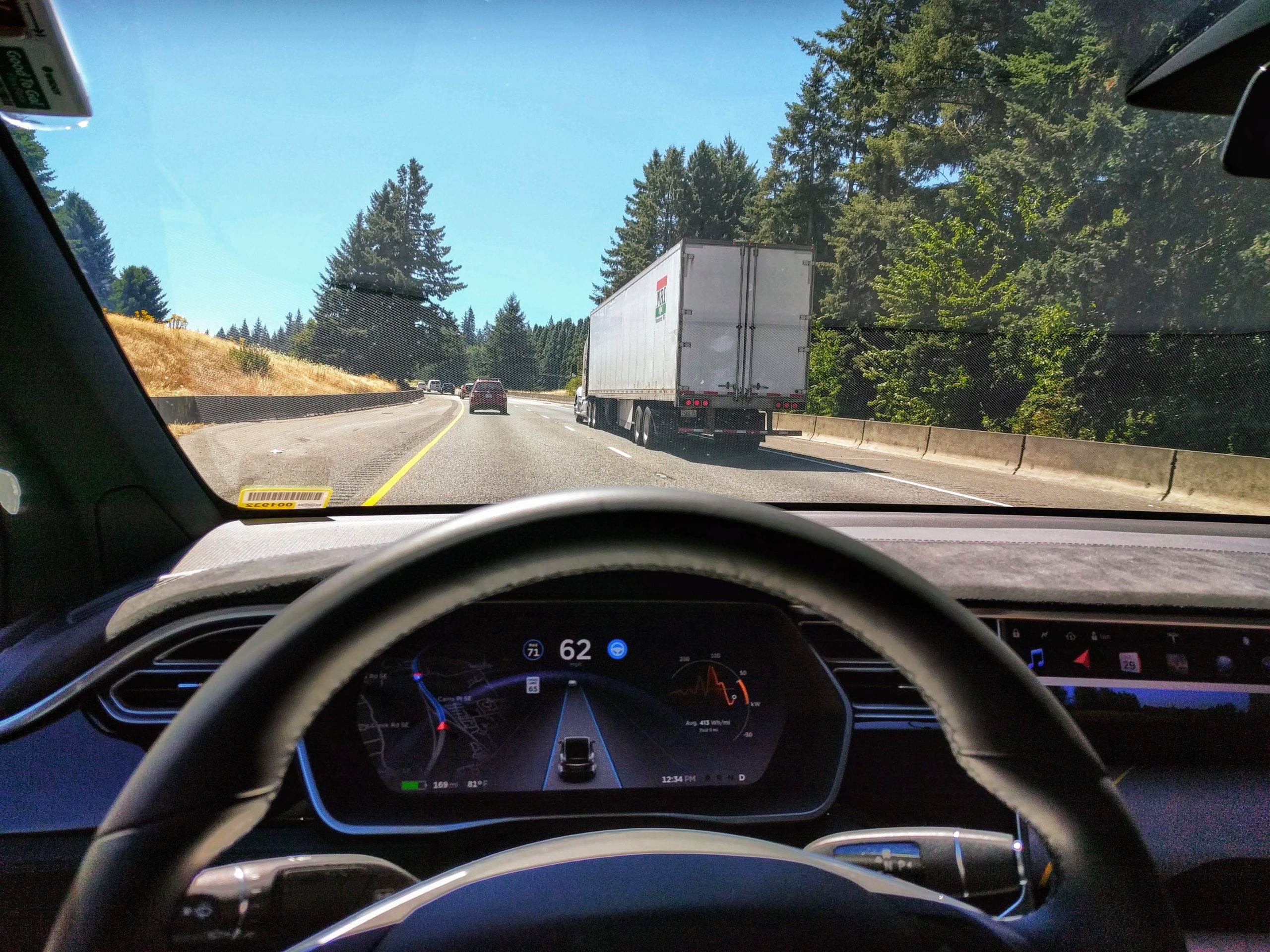 Picture yourself speeding down the highway with no hands on the wheel, checking your emails while your car takes care of responding to what’s happening on the road. Would you trust your car to make the right decisions? If you have doubts, you’re not alone.

Car manufacturers believe that people are ready to trust computer-controlled autonomous cars. In March, Honda released the first car with certified level 3 technology – meaning the car can steer, accelerate and brake without the driver – and around 18 million cars sold in 2024 are expected to have some type of automated driving feature.

Stefano Bianchi is the research and innovation manager at the green tech company algoWatt in Italy and studies automated vehicles. He believes that part of people’s distrust of autonomous vehicles comes from early adopters who over trust what an automated vehicle can do.

‘I think because we are living in the transition phase where we are seeing different “flavours” and rates of acceptance,’ he said. ‘We have those who trust the technology so much that they even cheat – they are not worried about their dangerous attitude towards automated driving.’

He points to the example of Tesla drivers who found ways to override the car’s ‘Autopilot’ feature, which requires drivers to keep their hands on the steering wheel in case something goes wrong. People began to share tricks to simulate having hands on the wheel – such as wedging an orange against the wheel, or in some cases buying prosthetic hands to hold the wheel while the driver ignored the road. Drivers over-relying on autopilot has unfortunately led to fatalities.

Over the past two years Bianchi and colleagues at the Trustonomy project have looked at how companies can improve the technology of automated vehicles and thus people’s trust.

In particular, they are researching better ways for the car and driver to switch control between each other. For example, an automated vehicle might ask a driver to take over by flashing a light, sounding an alarm or using vibrations in the driver seat.

In one experiment, volunteers donned virtual reality headsets that placed them in an automated car while they played a game. After a while, the car signalled that the road ahead was blocked and the driver had to take control. Sensors then measured the driver’s reaction time to see what mix of alerts worked best, and researchers are now evaluating the results.

Another experiment planned for later this year will focus on monitoring drivers in a driving simulator to see how well they trust autonomous driving while it’s happening. One setup will ask drivers to play a simple matched-pairs game while the car drives autonomously. The thinking behind this is the more engaged drivers are with the game, the more they are trusting the car to drive well.

The results from both these monitoring experiments can help inform car manufacturers how to improve how their cars interact with drivers.

The Trustonomy project is also developing a curriculum for drivers to teach them what automated vehicles can and cannot do, and about the warning systems of different car manufacturers. In the future this can be included in theory and practical training, for example for long-haul truck drivers, says Bianchi.

Trust in automated vehicles will not come overnight, says Bianchi, though he believes perfecting these designs now will pay off in the future. ‘The trust and acceptance of this kind of technology comes with the use of it and the availability of it around us.

‘I bet that if we had autonomous electric buses going for school every day for several years, at some point children will not pay attention, because it’s the new normal,’ he said.

Dr Ingrid Skogsmo of the Swedish National Road and Transport Research Institute has seen people’s attitudes shift as automated cars have begun to be rolled out.

‘What I’ve seen over time is that this extreme optimism about what automated vehicles can do and can’t do … has evolved into an understanding that it is far more complex. I think the risks and potential benefits are becoming much more clear,’ she said.

In a project called BRAVe, Dr Skogsmo and colleagues surveyed 7,000 people across seven countries to better understand people’s opinions of automated vehicles. It focused on people’s views of automated cars from the perspective of people walking on the street, cyclists, and e-scooter users, as well as drivers of non-automated cars.

‘It’s not just the driver who has to trust an automated vehicle,’ said Dr Skogsmo. ‘We also have to think about drivers of conventional cars and other road users like pedestrians and motorcycle riders and bicyclists and how they interact with automated vehicles.’

The results showed that most people still trust human drivers more than automated vehicles, and around 30% of respondents would feel unsafe crossing a road with an automated car approaching.

Interestingly though, different parts of society trusted automated cars more. For example, those that would most trust the automated vehicle were motorcycle riders and cyclists, says Dr Skogsmo. ‘We think that’s because they’re not too impressed by the human drivers,’ she said. ‘If you design an automated vehicle you probably design it so that it adheres to traffic rules like giving way at pedestrian crossings.’

According to their survey the greatest factor to increasing trust is transparency – knowing what the automated vehicle is doing, and when. For example, the survey showed that people would prefer if the automated car indicated visually that it would allow the pedestrian to cross the road. Testing this out in virtual reality showed that the car indicating its intent and slowly decelerating doubled the rate of people confident enough to cross the road.

‘I bet that if we had autonomous electric buses going for school every day for several years, at some point children will not pay attention, because it’s the new normal.’

Dr Skogsmo says that the project partners are now using their data to help shape regulatory testing, as well as evaluations done by EuroNCAP, an organisation that provides consumer information on the safety of new cars. ‘There weren’t any good pedestrian crossing tests (in the EuroNCAP evaluations) for example,’ she said. ‘If you have some regulation behind this then you can build up the argumentation for the technology.’

This is backed up by the 2019 Eurobarometer survey: 69% of those surveyed said that they believed national authorities will be important to rolling out the vehicles in society, with 65% believing the EU has a role to play.

‘The Eurobarometer is quite interesting because it covers a big sample of European people,’ said Dr Monica Grosso, a transport economist at the EU’s in-house science and knowledge service, the Joint Research Centre (JRC) in Ispra, Italy. From June 2020 to January 2021 the JRC, along with the German Aerospace Center and the University of Cantabria, ran 15 focus groups with the public and transport experts from Italy, Germany and Spain to get a better idea of people’s opinions on autonomous vehicles, which could then support future policies.

‘We wanted to grab some qualitative insight – if the answers of the focus groups were going in the same direction as the Eurobarometer.’

The focus groups showed that people’s trust in the technology could increase if they see how it works, says Dr Grosso.

Results from the focus groups will help develop a ‘living lab’ project on automated vehicles that brings the public and other interest groups into the legislating process. People in the living lab can develop policy ideas and then quickly see them in action in local authorities. After testing the policies and getting feedback these same people can then fine-tune the policies to be more efficient and effective.

The first phase of the living lab is planned for this summer in Ispra, says María Alonso Raposo, its scientific coordinator. Volunteers will be able to view automated vehicles in action and then be interviewed to get their initial thoughts on the technology. Later, the volunteers will be able to use the technology and be asked how they feel using it.

The goal, says Alonso Raposo, is to see if people’s opinions change, and if the automated vehicles are used differently over time.

‘We see them as a kind of regulatory sandboxes so that innovative policies and also innovative technologies can be tested in a real-life setting,’ said Alonso Raposo. ‘It’s a way to understand what can work and what doesn’t in reality.’

The research in this article was funded by the EU. Trust in automated vehicles will be one of the topics on the agenda at the third European Conference on Connected and Automated Driving, which will take place virtually from 20-22 April 2021.