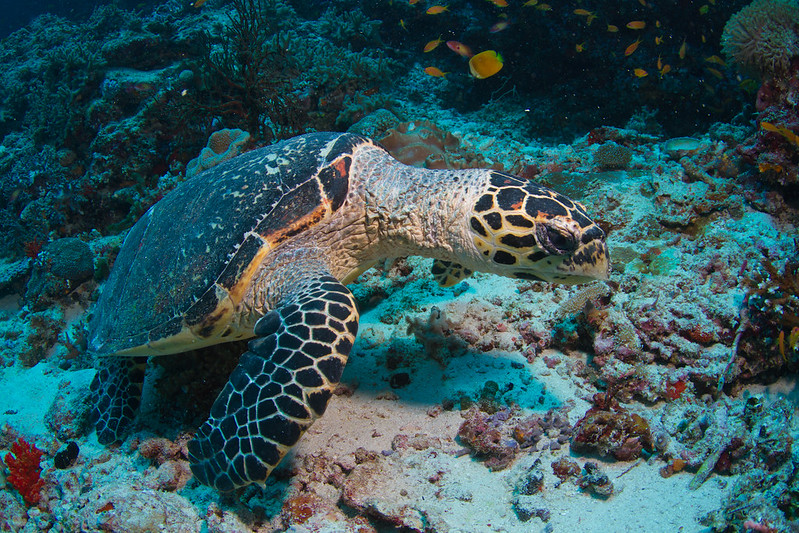 Sea turtles have been around since dinosaurs roamed the Earth, stretching back about 110 million years. Yet now their existence is at risk, with six of today’s seven species classified as threatened or endangered.

While efforts are ongoing to protect turtles, part of the puzzle that requires more knowledge concerns the effects of interspecies mating, or hybridisation – particularly between hawksbills (Eretmochelys imbricata) and loggerheads (Caretta caretta) in one area of Brazil.

Hybridisation has been observed in five of the world’s existing species, yet much of this has been at low levels. However, in Brazil’s northeastern state of Bahia, genetic analysis has uncovered that as many as 30 to 40% of female hawksbills at some nesting sites are, in fact, first-generation hybrids resulting from cross-breeding with loggerheads.

These hybrids can then produce viable second-generation offspring by interbreeding, or ‘backcrossing’, with members of either parent species.

Understanding why this is happening may be important for informing conservation efforts because hybridisation can have consequences for species’ survival. It could also shed an intriguing light on the potential role played by hybridisation in long-term evolution, given that hawksbills and loggerheads are estimated to have diverged genetically as long as 30 million years ago.

‘You don’t see that a lot in the animal kingdom – species that have diverged so long ago and they’re capable of still hybridising,’ said Dr Sibelle Torres Vilaça, a population geneticist at the University of Ferrara in Italy. ‘There’s evolutionarily an interesting question there: what happens when these genomes meet again?’

Some cases of turtle hybridisation involve crosses between species that diverged more than 60 million years ago, which is very unusual. ‘If you think about primates, it would be something like humans and lemurs hybridising,’ said Dr Vilaça.

Dr Vilaça is investigating the causes of this hybridisation and its implications in the TurtleHyb project.

She says that interbreeding is aided in Bahia by the overlapping nesting seasons of hawksbills and loggerheads. Taking into account that the two species mature between the ages of 20 and 40, while two hybrid generations have been observed so far, her team thinks high-frequency cross-breeding started before 1980.

The ensuing period coincided with falling populations of many turtles, through activities including egg and meat exploitation, coastal urbanisation and pollution. Climate change poses further threats, though signs of population increases have been seen more recently in the wake of conservation initiatives.

While the specific drivers of this hybridisation remain unknown for now, Dr Vilaça says one possibility is that population decreases have meant a limited number of own-species partners for the hawksbill – the less numerous species in Bahia – and relatively more encounters with loggerheads.

Repeated interbreeding could affect the reproductive and survival prospects of future populations, says Dr Vilaça. She notes that neither second-generation adults nor third-generation hybrids have yet been observed, maybe suggesting a ‘hybrid breakdown’ at this stage that affects their viability, due to the recombination of genes in such distant species.

But that’s not the only possibility for the absence of second-generation adults, says Dr Vilaça. ‘We don’t know if this is a hybridisation event that is so recent we haven’t seen them yet, or there is some sort of genomic incompatibility that means for some reason these backcrosses don’t survive to adulthood,’ she said.

‘You don’t see that a lot in the animal kingdom – species that have diverged so long ago and they’re capable of still hybridising.’

Sea turtles’ lengthy lifespan, often estimated at 50 years or more, makes it hard to observe these processes long-term, as does the animals largely spending their lives at sea.

To help overcome such hurdles, TurtleHyb is carrying out analysis of the whole genomes of the two species and hybrid individuals, with the aim of inferring potential future consequences by elucidating hybridisation events in the distant past and their knock-on effects.

Dr Vilaça explains that past studies have often focused on the analysis of mitochondrial DNA, or genetic information passed from the mother to offspring. While this is easier to obtain and sequence than the nuclear DNA inherited from both parents, it only tells part of the story.

But TurtleHyb is looking at both types of DNA, aided by recent advances and more affordable next-generation sequencing. ‘From the nuclear genome, we can infer if a hybrid is an F1 (first generation) or backcross; we can also tell the story from more ancient hybridisation events, and look for genes that might have been inherited from them,’ said Dr Vilaça.

This could shed light on whether hybridisation has been a recurrent event in the turtles’ history, as well as whether it has actually conferred any survival advantages through the import of beneficial genes. Dr Vilaça’s team, which hopes to publish some results on this soon, is also looking at how much hybridisation events in turtles’ ancient history might have contributed to their genome.

The research may, meanwhile, have implications for understanding hybridisation in other animals, particularly other turtles and marine species that can travel long distances. ‘They can disperse a lot and migrate between oceans… you have all these possible places where they can meet,’ she said, pointing to studies that refer to hybridisation between whales.

In addition, it could suggest special adaptations that marine animals might develop to help them remain separate species in such a fluid environment.

Professor Marc Girondot, an ecologist at Paris-Saclay University in France, says that turtle hybrids can be a ‘mark of profound change of environment’. However, he says, it is also unclear how prevalent hybridisation was in the past, so more research can help pinpoint how much of the process is ‘normal’ change and how much is caused by human pressures.

Dr Camila Mazzoni, an evolutionary and conservation genomics researcher at Leibniz Institute for Zoo and Wildlife Research in Germany who has previously collaborated with Dr Vilaça, said there is a need to find out more about whether hybridisation between hawksbills and loggerheads will pose long-term problems because it may be something that has consequences decades or a century from now.

‘If it is localised, it might not be a big problem and there might be ways of mitigating it. But if you have more and more male hybrids, and they start going away from their place of birth over time, then (it is) spreading.’

Indeed, recent work on mitochondrial DNA and genetic markers that she carried out in the Abrolhos archipelago 70 kilometres offshore from Bahia, where hawksbills and loggerheads also cross-breed, suggested that hybrids were at a reproductive disadvantage – with only a quarter of their eggs producing live hatchlings, compared with more than half for pure breeds.

Dr Mazzoni emphasises that these are early findings that cannot give detailed historical genetic information, with whole-genome analysis needed to provide further insight. Nonetheless, she suggests this case of hybridisation would seem unlikely to be beneficial at first sight, given the vast amount of time since the two species diverged.

At the same time, she notes that turtles have evolved more slowly than many other vertebrates, thus potentially remaining compatible for much longer. ‘So who knows? Maybe they are the special case that even if they are very far apart, they can still import something from the other species and have some benefits.’

Yet one big challenge is understanding the movements and behaviour of males better, she says. Though female turtles return to their beach of birth to lay eggs, males remain at sea their whole lives – making it difficult to collect samples and track them, even though more is being discovered indirectly through analyses of nuclear DNA from females.

While not focusing on hybrids, Dr Michael Jensen, a marine biologist at Aalborg University in Denmark who will also lead an upcoming project called SeaTGen, is seeking to tease out more about the behaviour of male green turtles in the southwest Indian Ocean, as well as looking at overall populations to aid their conservation.

One important reason for finding out more about males is reflected in his research on the Great Barrier Reef, which has revealed nesting sites producing almost all female hatchlings. That could have implications for how the turtles will be impacted by climate change, because higher incubation temperatures for eggs produce more females. ‘Will there be enough male turtles around in the future for females to mate with?’ asks Dr Jensen.

In SeaTGen, research will be carried out by analysing both nuclear and mitochondrial DNA, as well as using satellite telemetry and ocean modelling, helping understand how turtle populations may be genetically linked through mating patterns.

These methods hold promise for gaining better insight on how to conserve turtles, alongside other factors that may deplete populations such as hybridisation, he said.

‘When we can accurately link turtles, or any species, sampled away from nesting beaches back to their population origin, we create a tool that is incredibly powerful for assessing threats to sea turtle populations, even if the threats occur far from the nesting beaches.’