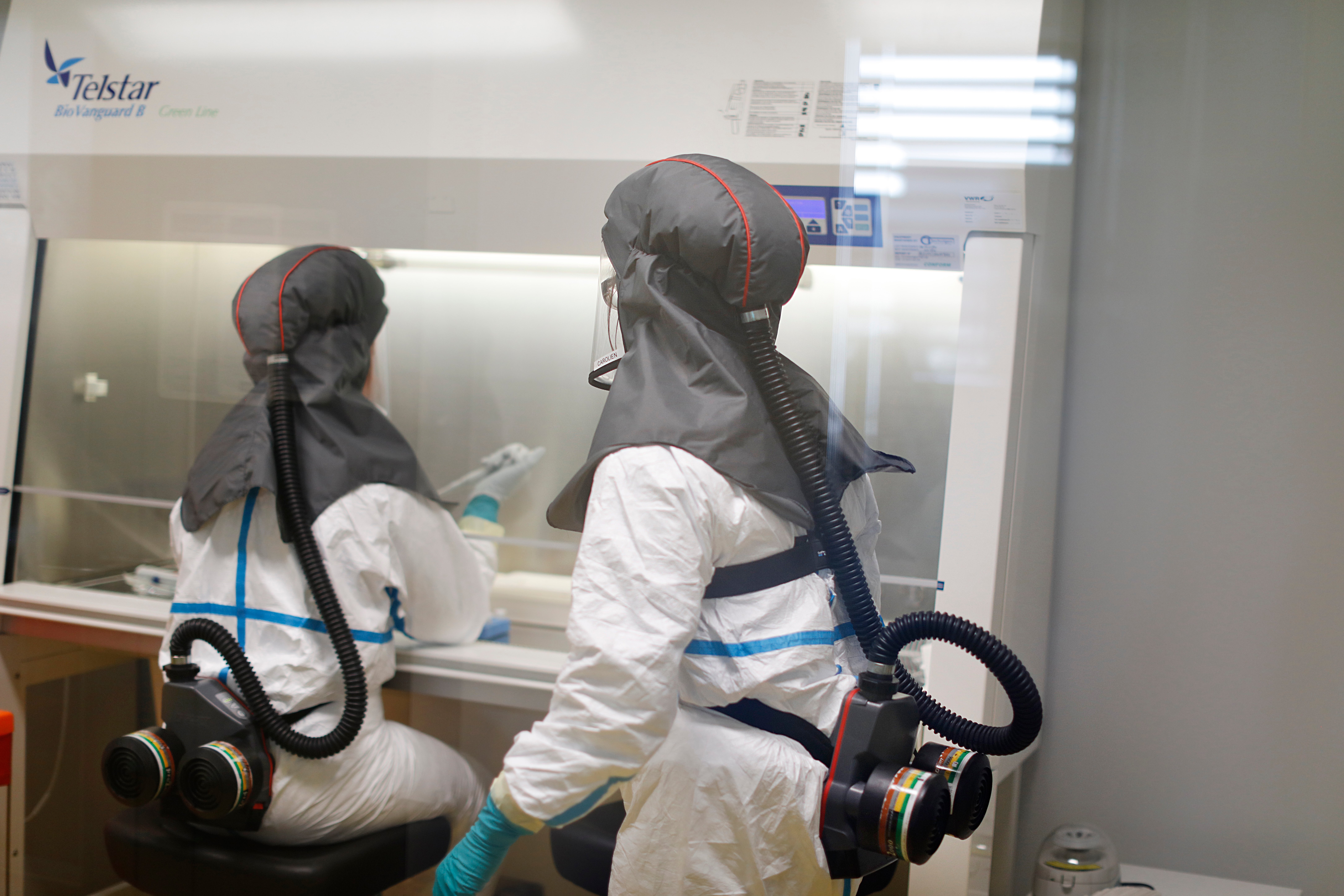 Professor Johan Neyts, a virologist at the Rega Institute for Medical Research at KU Leuven in Belgium, leads a team searching for drugs that can help us in the fight against Covid-19. His laboratory is part of two projects that are screening millions of compounds to find some that block the coronavirus from replicating and so keep patients from falling sick. He told Horizon about why this search is so important and how it might keep us safe from future pandemics.

It was September 2019 and I was speaking at an international conference in Wuhan, China. On the stage I explained that the world was not ready for the next pandemic – it was the classic lecture I would give about a few of the virus families that pose a risk. One of those I mentioned that day were the coronaviruses. Thinking back, I could never have imagined that just a few months later a coronavirus detected in Wuhan would be at the epicentre of a pandemic.

But just imagine if at the time SARS-CoV-2 – the virus that causes Covid-19 – was first detected, the doctors in China had been able to give their patients some potent, broad anti-viral drugs that work against coronaviruses. Doctors and nurses would also have been able to protect themselves. If they had caught it early enough, and with quarantine measures, it could have potentially slowed down or even stopped the spread of the virus.

We can never know for sure, but the situation today could have looked very different. And this is what motivates me each morning. If we can find drugs that act against viruses before they become a problem, we can turn global wildfires like Covid-19 into small bonfires.

Here at the Rega Institute at KU Leuven in Belgium, this is exactly what we are trying to do. We are searching for molecules that might form the basis of potent antiviral drugs that can be given to Covid-19 patients. What we are looking for are compounds that interact with the virus and block it from replicating itself.

But finding the right molecules is like looking for a needle in a haystack. So, we are involved in two complementary approaches to do this. One is the EXSCALATE4CoV project, which uses artificial intelligence and high-level supercomputing to predict which compounds might block the replication cycle of the virus based on what we know about the structure of SARS-CoV-2 and its interaction with proteins on the outside of the cell. Our partners at EXSCALATE4CoV use the largest European supercomputers to search through a massive chemical library by performing millions of simulations every second to see if they might bind to a particular target site on the virus and block its replication.

When it identifies a compound that might work, the chemists make it and send it to us (at the Rega Institute) for testing against the infectious virus. This work is performed in a fully automated laboratory we have built called Caps-It.

We are also using Caps-It to follow a more traditional approach to drug discovery in another project called SCORE. This is using what is called blind screening, where thousands of molecules are evaluated for antiviral activity against the virus growing in cells.

You need quite a bit of capacity to test so many molecules against this highly infectious virus in living cells. Caps-It has allowed us to be one of the few laboratories that are equipped to safely test large numbers of compounds against live viruses like SARS-CoV-2.

Caps-It is an entire testing lab sealed inside what is effectively a box. Everything is done by robotics – handling the pathogen, adding reagents, incubating, testing and deactivating the infectious material – so no humans need to come into contact with the virus or go inside. My team can even operate the system while sitting at home at night via web cameras if necessary.

In a walk-in high-level biosafety laboratory, the rooms have to be pressurised, are expensive to run and take up a lot of space. Technicians have to wear protective suits and can only work inside for a few hours. Caps-It can work 24 hours a day, seven days a week.

It was designed by one of my senior team members a few years ago, who had the idea and worked with specialist engineers to build and install it. What we had in mind was that in a pandemic situation we would need to be testing compounds day and night, but we would not want lab technicians doing that with a dangerous, highly pathogenic virus, so let’s fully automate it.

Once it was built, we gradually geared it up over the first couple of years – first without any viruses and then with low pathogenic viruses. Then just as we were ready to accept high pathogenic viruses, boom – it is 2020 and Covid-19 arrives. We were ready just in time with the facility at a really pivotal point to run high numbers of tests on compounds against the virus.

The system can test thousands of different chemicals at the same time against a virus. The system has space to incubate up to 480 assay plates at once, each with 96 or 384 wells (small holes into which the virus, test compounds and cells can be placed).

‘We spend trillions of dollars on weapons and on military spending, so sure we should also be arming ourselves against the next pandemic.’

So far we have performed close to 2 million tests on compounds in cell based systems, and every 30-40,000 compounds we test, on average, we find what we call a hit compound – a molecule that might block replication of the virus – just by chance.

But that is just a starting point. Once we have picked up an interesting new target, we then have to work with the chemists to optimise it to increase its potency and its selectivity. Then we need to test it in animals, and we have developed a hamster SARS-CoV-2 infection model that allows us to do that.

So, I’d say these two approaches – the AI and the blind screening – go hand in hand. We have already identified some compounds that could become potential drug treatments for Covid-19 and they are showing promise in the hamster models. Some are experimental antiviral drugs or existing drugs against other things. We were also able to show that hydroxychloroquine, which some people were claiming could treat Covid-19, had no activity at all.

The AI approach is a powerful technology and along with the blind screening is helping us identify the Achilles’ heel of the virus. It speeds things up.

This (approach) is not just going to be important in the current pandemic but also in tackling or preventing future pandemics too. There are a number of virus families from which potentially highly contagious and dangerous viruses may emerge. One such family are the Paramyxoviruses, which includes measles.

It took just under 12 months to create highly effective Covid-19 vaccines, which is amazing. But Covid-19 has a basic reproduction number (R0 – the number of people an infection can spread to from one case) of 2-3, while something like measles has an R0 of around 15. If you have a virus like that spreading, having to wait 12 months for a vaccine is going to be too late. We did some modelling with colleagues here in Belgium that showed even drugs without high potency against Covid-19 would be enough to help dampen local outbreaks.

That is why we need antiviral drugs that can slow that spread from people who are infected and reduce the severity of the disease they get. We spend trillions of dollars on weapons and on military spending, so sure we should also be arming ourselves against the next pandemic.

We need a global insurance policy for the 7.7 billion people on the planet. That is my mission.

As told to Richard Gray.