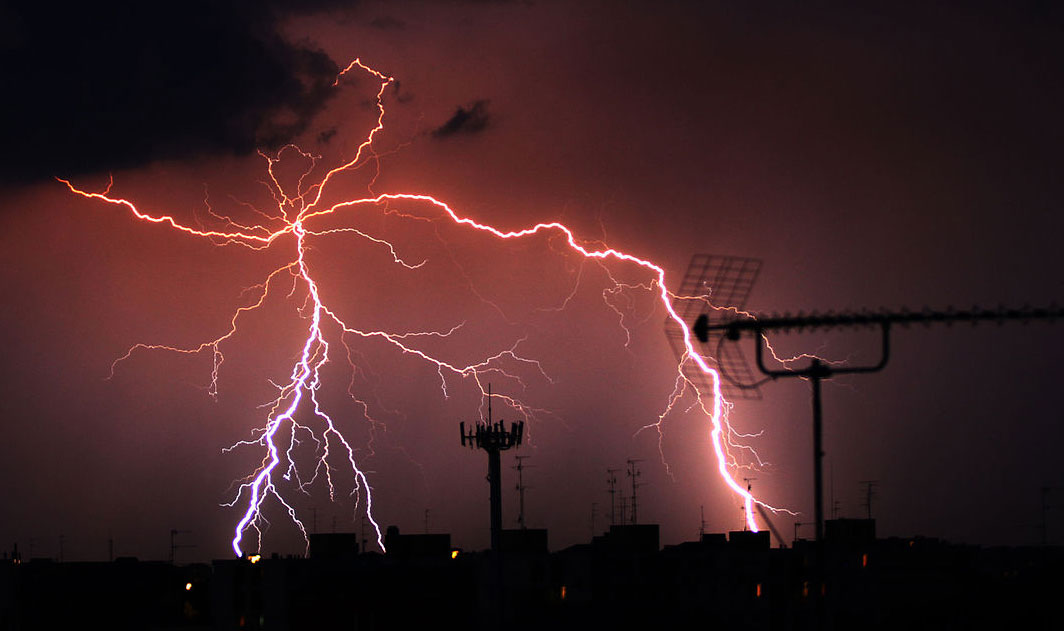 Imagine lying on a green hill watching the clouds go by on a beautiful day. The clouds you’re probably thinking of are cumulous clouds, the ones that resemble fluffy balls of cotton wool. They seem innocent enough. But they can grow into the more formidable cumulonimbus, the storm cloud. These are the monsters that produce thunder and lightning. They are powerful, destructive and intensely mysterious. They may also be getting a lot more common, which makes understanding their workings – and their effects on the human world, including how we construct buildings or power lines – more important than ever.

Many clouds form when warm wet air rises to high altitudes where it gets colder and condenses into water droplets. Thunderstorms happen when a cloud forming in this way quickly grows very large, sucking in more and more water vapour. There almost always follows precipitation and strong gusty winds. And of course, lightning. Lightning might seem fairly rare, but it has happened about 700 times – we get about 100 strikes per second – somewhere around the globe in the time it has taken you to read this sentence.

Lightning and thunderstorms appear to be getting more common and there are suggestions that this will continue as a result of global warming. In 2014, Professor David Romps at the University of California, Berkeley, US, developed an atmospheric model that predicted lightning will increase by 12% for every degree Earth warms. There are some indications that this might be happening already. Researchers in the Netherlands have looked at the numbers of fires started by lightning in the forests of Alaska and Canada and found these have risen by 2% to 4% a year for the past 40 years.

We don’t understand lightning well. If, for example, you were to film a lightning strike and play it back in super slow motion, you’d notice that the strike proceeds in steps. It pauses for a while at intervals before moving on, says Dr Alejandro Luque at the Institute of Astrophysics of Andalucía in Granada, Spain. But we don’t know why this happens. He says there are a few papers on this but essentially no accepted theories.

Dr Luque reckons he might have some insights into the problem, however, through his work studying an even more incredible yet better understood electric phenomenon – sprites.

Sprites are huge, coloured jets of light that occur between 50 and 90 kilometres above the ground, far higher than thunderstorms. Their existence was doubted for years as they are hard to see from the ground. Dr Luque studied them mainly by looking at pictures taken by research aeroplanes.

Though they are less familiar than lightning, the physics of sprites is easier to study because, at such high altitude, there is little air and so electric discharges happen more slowly and at colder temperatures. Lightning creates temperatures hotter than the surface of the sun. But Dr Luque says sprite discharge channels are ‘pretty much the same temperature as the surrounding air’.

The channels in sprites are made of many tiny filaments called streamers. And as the streamers propagate, some spots within them glow more brightly and persistently. In sprites, the bright glowing is thanks to the behaviour of electrons, says Dr Luque. In some areas of the streamer, electrons attach to air molecules and this increases the strength of the electric field, producing brighter light.

This explanation is uncontroversial, says Dr Luque, but what we don’t know is whether – as he suspects – an analogous process could explain why lightning itself proceeds in steps. In the context of lightning, at lower altitudes, there are more air molecules and the attachment of electrons to them could work itself out in a slightly different way to produce the stepping pattern. Dr Luque wants to find out if this is right through his eLightning project.

He and his student Alejandro Malagón‐Romero set out this hypothesis in 2019. His team is now working on building a computational model of lightning to test whether the process they expect can explain the stepping behaviour.

Understanding why lightning proceeds in steps isn’t going to help us make it less dangerous. But Dr Luque says getting a better understanding of the phenomenon could be helpful in all sorts of other areas. For instance, discharges can form around electric power lines and so they must be designed to minimise this. Such discharges are also used in industry, for example, in sanitising waste industrial gasses and even in photocopiers. A better grasp of how they work might lead to improved designs.

Lightning bolts might seem like the most dangerous weapon in the arsenal of a thunderstorm, but these storms also create unusually strong winds.

Europe’s weather is dominated by air systems known as extra-tropical cyclones, spiralling air currents that bring wind and rain with them as they sweep across a region. The average European city sees between 70 and 90 a year and scientists have a good understanding of how they work. These storms can be strong, though they aren’t always.

Whenever a building is built in Europe, the designers must make sure it can withstand strong winds and the models they use for this are based around extra-tropical cyclones. The trouble with this is that it doesn’t account for winds believed to be rare – like those of thunderstorms.

To understand why this matters, you need to understand the difference between cyclones and thunderstorms. First, thunderstorms are more intense than cyclones. While a cyclone can last three days a thunderstorm might be over in 20 minutes. So instead of a moderate, sustained wind you get a bout of very strong gusts. Second, and more importantly, is how the strength of the winds varies depending on the altitude. Cyclones get stronger and stronger higher up. Thunderstorms, on the other hand, tend to produce winds starting at about 100m up and blow downwards, with the wind getting stronger as it descends. ‘A normal wind blows parallel to the ground, but a thunderstorm blows downwards. It’s completely different,’ said Professor Giovanni Solari at the University of Genoa in Italy.

Put all this together and the result, says Prof. Solari, is that we are over-engineering our tallest buildings, especially skyscrapers, and under-engineering low rise buildings and structures such as shipyard cranes. The top 200 metres of a 300-metre skyscraper is probably not getting a blowing from a thunderstorm, but we design them as if they will because our models assume winds get stronger higher up. ‘We are making buildings too safe,’ he said. On the other hand, small cranes can get tipped over battered by thunderstorms, which produce their strongest wind at ground level.

Prof. Solari’s goal, through the THUNDERR project, is to correct this, which could make construction more efficient and less costly, by producing a model of thunderstorm wind that can be used to help design buildings. The first step was to take a synthetic thunderstorm created in a world class wind tunnel at the University of Ontario in Canada and make a model of this. That’s now done, says Prof. Solari, and his models do a good job of capturing what these synthetic storms do. But that was the easy part.

Now he is moving on to modelling real thunderstorms, in which there is huge variation. To help, Prof. Solari and his team have constructed a network of 45 weather towers spaced around the Mediterranean coast designed to capture data on winds created by thunderstorms.

‘People used to think that thunderstorms were rare,’ said Prof. Solari. ‘That was because we couldn’t see them. The network has now recorded a database of 250 thunderstorm records. The plan is now to tweak the initial model to account for all these different thunderstorms and be truly representative.’