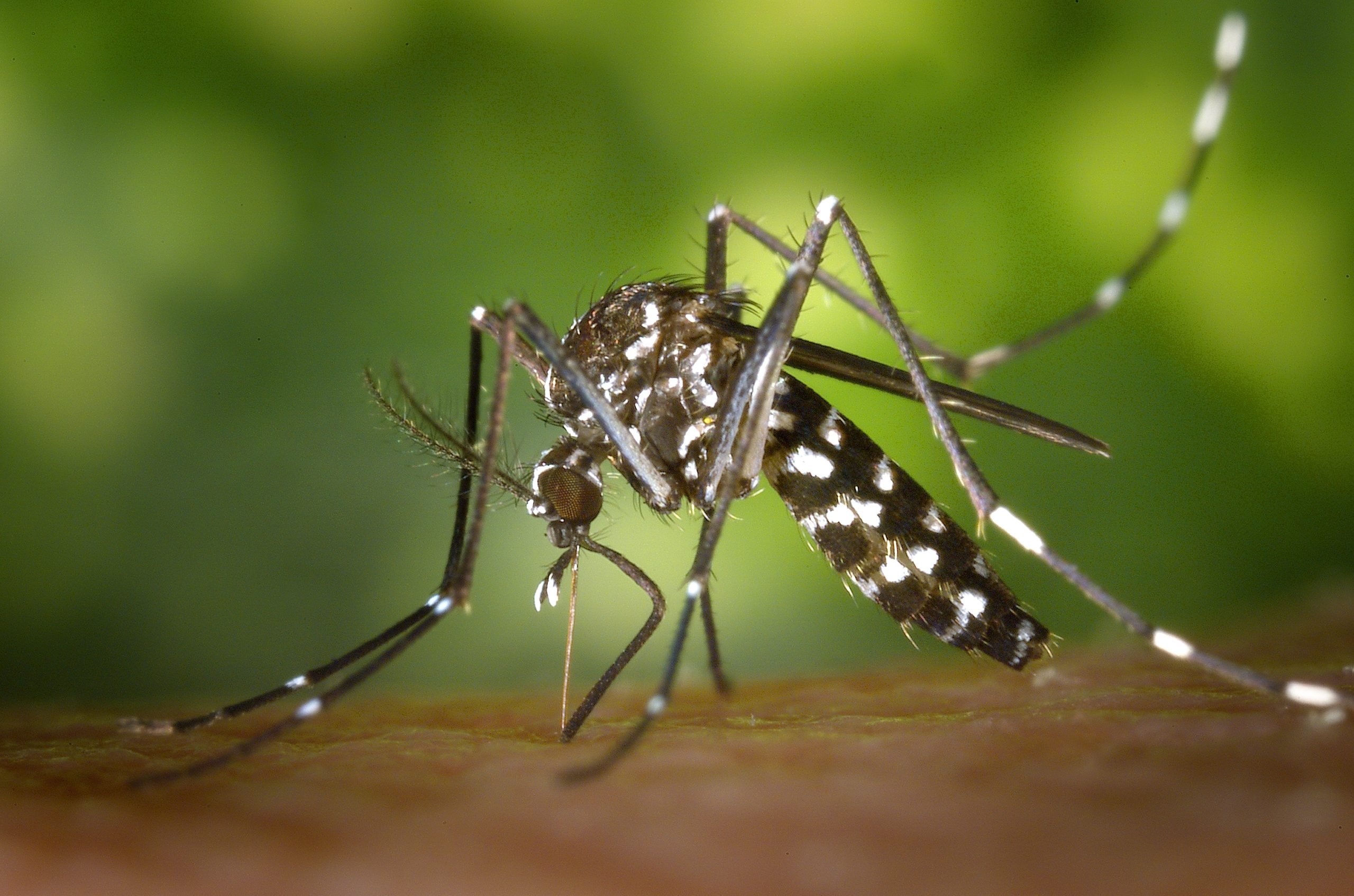 Aggressive tiger mosquitoes capable of spreading debilitating tropical diseases such as dengue and Zika are spreading through Europe, but scientists hope it may be possible to control these biting pests with a form of insect birth control and drones.

The bite of the Asian tiger mosquito may be little more than a pin-prick, but it leads to tens of thousands of deaths globally each year.

The tiny aggressive insect, named for its striped appearance, carries a range of unpleasant viruses that cause diseases including yellow fever, dengue fever, Chikungunya, Zika and Japanese encephalitis. While these are seen largely as tropical diseases, the spread of mosquitoes that carry them has raised fears the viruses could also become more common in Europe.

The European Centres for Disease Control (ECDC) predicted ten years ago that tiger mosquitoes would spread throughout Europe and climate change is now threatening to make their spread even more likely. ‘Even the southern part of Sweden is potentially suitable climatically for this mosquito, though it has not arrived there yet,’ said Professor Jan Semenza, who leads an ECDC section which assesses infectious disease threats.

The stripy pest, which is also known as Aedes albopictus, is originally from Southeast Asia, but arrived in Albania in the 1970s before reaching Italy in the 1990s. It initially colonised the Mediterranean coast, then steadily expanded northward, and is now found across much of France, Greece, Bosnia, parts of Spain, southern Portugal, and Germany. It has even been found in greenhouses in the Netherlands. During the summer, the mosquitoes have now become a nuisance in some places.

But with the mosquitoes can come disease. So far outbreaks have been relatively contained and in low numbers, but there have been cases of dengue in Croatia, France and Spain. In Italy, hundreds of people fell ill from Chikungunya in 2017. Two cases of locally caught Zika occurred in the south of France in 2019.

The diseases can be carried to Europe by people infected with the virus traveling from countries in South America and Asia where they are endemic. Brazil, for example, has been a hotspot this year for dengue fever. If these people are bitten by a tiger mosquito in Europe, the insect can then transmit the virus to other people it bites.

‘We have seen an increase in vector capacity due to climate change,’ warns Prof. Semenza, with warmer temperatures allowing the biting insects to survive over winter. ‘Dengue has a huge disease burden worldwide. It can morph into a life-threatening condition, so we are concerned about it moving into Europe.’

Dengue was endemic in Greece in the early 20th century but was eliminated. ‘We don’t want a recurrent of this type of disease in Europe,’ added Prof. Semenza.

But rising numbers of mosquitoes capable of carrying disease makes it more likely that these viruses could become established in Europe once again. Another disease-carrying insect – Aedes aegypti, also known as the yellow fever mosquito – is also threatening a return to Europe after it was eradicated there in the 20th century. Originally from Africa, it is present today near the Black Sea, on the Portuguese island of Madeira and north-eastern Turkey.

But with many insecticides now prohibited in Europe due to their toxicity and the wider harm they cause to the environment, there are fewer options for controlling the mosquitoes. 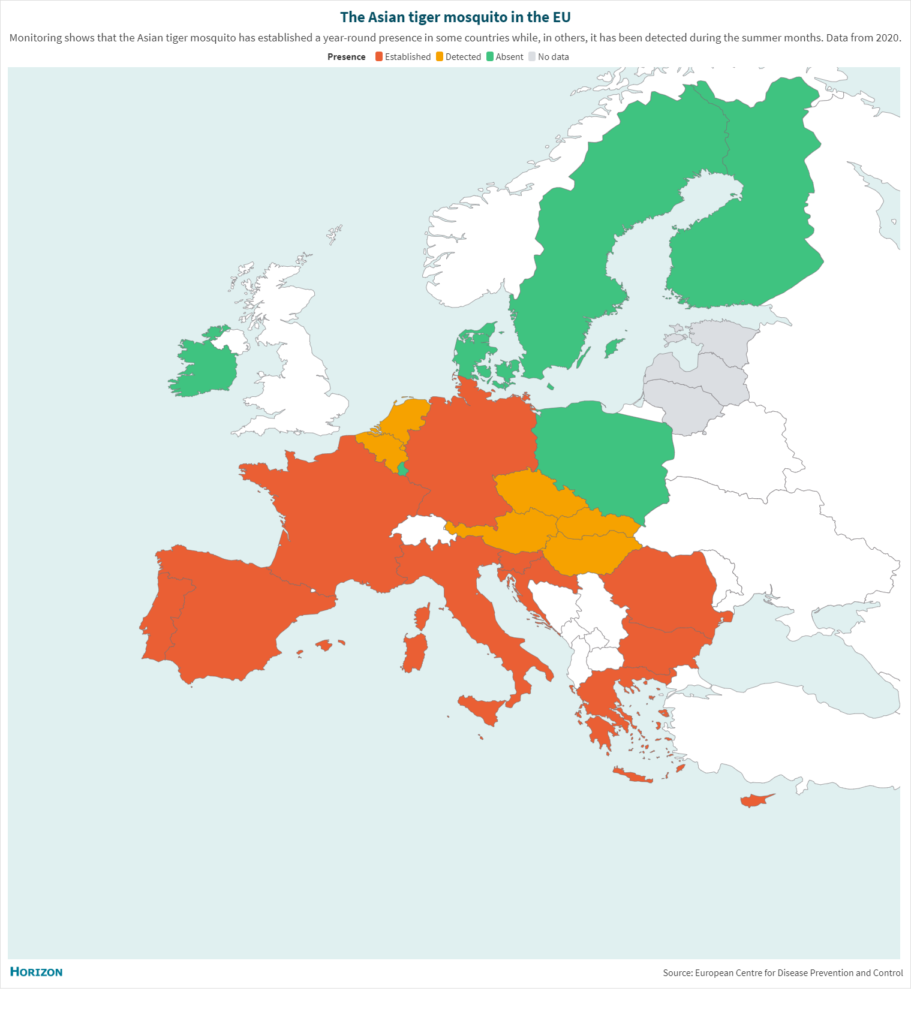 Dr Jérémy Bouyer, a biologist and mosquito expert at the French Agricultural Research Centre for International Development (CIRAD) in Montpellier, predicts Europe could face an uncontrolled dengue epidemic within the next five to ten years unless more is done to control mosquito populations.

‘The Aedes tiger mosquitoes are very difficult to control,’ said Dr Bouyer. The insects tend to breed on relatively small sites, which makes targeting them difficult, he said. ‘Rather than ponds or lakes, they like human-made habitats.’

But we may not be entirely defenceless against these mosquito pests. Dr Bouyer is developing a new approach to combat mosquitoes as part of a research project called REVOLINC. Over the next few years, he will be releasing tens of thousands of sterile male yellow fever mosquitoes on Reunion Island, a French territory in the Indian Ocean.

When released, the males should mate with wild females and produce sterile eggs, and so suppress the numbers of mosquito larvae. However, the males will also be coated with a secret weapon – a biopesticide called pyriproxyfen, which mimics hormones in insects and restricts their growth. The males transfer this biopesticide onto the female when they try to mate with them, and she contaminates her eggs and larvae habitat. It means eggs fertilised by unsterilised males are also unable to mature from larvae into adult mosquitoes.

‘Even if the sterile males don’t succeed with the females, they still transmit the biopesticide,’ said Dr Bouyer. ‘We have shown that this might increase the impact of control by between 10 and 100 times, so we might need to release fewer male mosquitoes.’

To rear enough insects, Dr Bouyer and his colleagues have developed technologies for veritable mosquito factories at the International Atomic Energy Agency (IAEA) facility in Seibersdorf, Austria, where the larvae are reared on stacks of trays submerged in water, each supporting 18,000 of the wrigglers. The larvae are then sorted by sex when they pupate before the young males are sterilised with a finely balanced dose of radiation – enough to achieve almost complete sterility, but leaving them healthy enough to be able to mate when released. The sterile males can then be shipped in chilled boxes.

‘The Aedes mosquitoes are very difficult to control… rather than ponds or lakes, they like human-made habitats.’

On Reunion Island, male mosquitoes were previously released in canisters placed on the ground. But 90% of the insects will not travel more than 100 metres from this spot.

In an attempt to improve the distribution of the sterile male insects, Dr Bouyer is also working on a project called MOSQUAREL, which will use drones to release mosquitoes from the air. He has already used a 12kg drone in Brazil to release 50,000 sterile male mosquitoes per flight and is hoping to trial a lighter 900g drone capable of releasing 30,000 mosquitoes at a time. The advantage of this smaller drone is that it would be permitted to fly over residential areas in Europe.

‘To treat a city with sterile insects, you need to drive a vehicle along roads, stop every 100 metres and release a box of mosquitoes,’ said Dr Bouyer. ‘It takes two hours for two vehicles to treat 30 hectares.’ A drone launched from the back of a truck could treat the same area in ten minutes, he said, and is quicker, cheaper and distributes the insects more evenly over an area.

The new drone will also be tested in Valencia, Spain, with the release of sterile tiger mosquitoes in a citrus tree production area, in collaboration with the Spanish state-owned rural development company Tragsa.

But while Reunion has a few isolated pockets of yellow fever mosquitoes, which Dr Bouyer hopes to wipe out, tiger mosquitoes are a bigger problem on the island. Reunion has experienced an increase in dengue fever cases since the beginning of 2018, and a particularly bad outbreak this year brought a number of deaths. Warmer temperatures and wet conditions have allowed tiger mosquitoes to flourish, so Dr Bouyer plans to target these insects next. But releasing sterile males coated with biopesticide alone will not work.

Both Aedes mosquito species only need minuscule amounts of water for their larvae, which often develop on rubbish items, in discarded plastic or in old tyres. So reducing such man-made larval habitat in urban areas will also be necessary to ensure the drone drops can have more of an impact.

‘If we suppress them in one site, then we can prevent dengue around there,’ said Dr Bouyer. ‘That is the best success we could hope for – to protect people.’