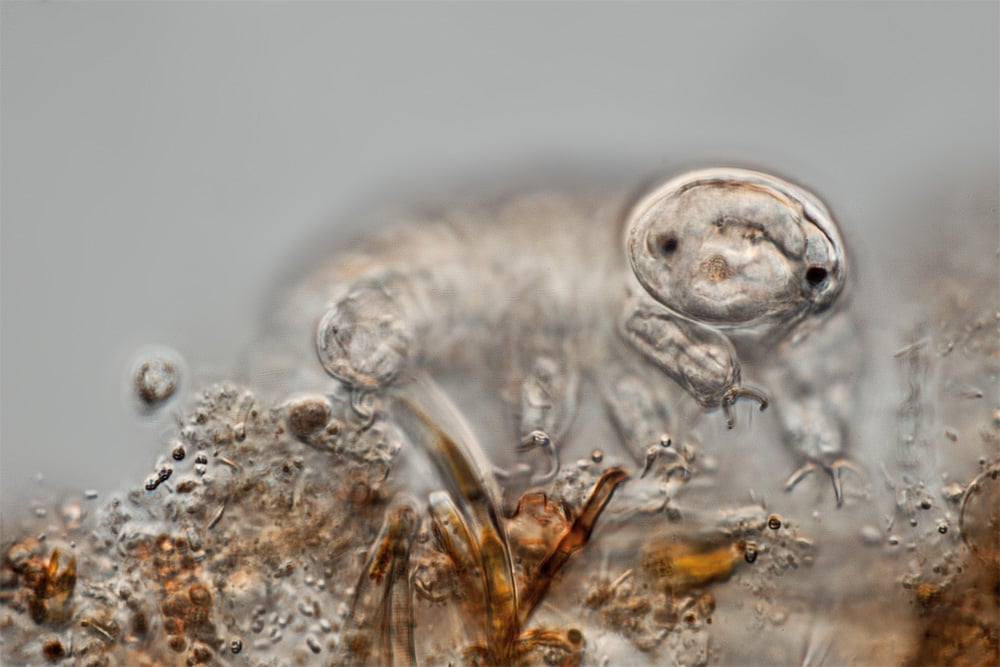 New insights into how tardigrades survive extremely dry environments could reveal new ways of preserving drugs, boosting crops’ tolerance to drought or fighting disease, but so far there is no simple answer to how these tiny creatures endure desiccation.

Despite being nicknamed moss piglets, tardigrades do an awful lot more than just snuffle around in vegetation. These microscopic organisms, found in ecosystems ranging from mountaintops to deep-sea trenches, can endure extreme stresses such as drying out and freezing, and have even been known to survive in space.

That makes the creatures – also known as water bears – increasingly interesting to scientists, who are seeking to understand the molecular processes that make them some of the hardiest souls known to biology.

A key area of investigation is how they can survive extremely dry conditions, in which they curl into a ball and enter a dormant state known a tun – a form of suspended animation that shuts down metabolism. They can then revive years later when the conditions are right.

‘Of all the abiotic (physical) environmental factors, desiccation is considered the most detrimental to organisms,’ said Dr Maria Kamilari, a postdoctoral researcher in evolutionary ecology at the University of Copenhagen in Denmark. ‘Understanding the mechanisms of extreme desiccation tolerance can be of high impact for the natural and biomedical sciences.’

One application that Dr Kamilari suggests is for preserving molecules used in vaccines via methods other than refrigerated storage. Some studies have shown that specific proteins found in tardigrades can protect certain enzymes contained in drugs known as biologics from desiccation or freezing.

If we understand the processes better, it may also become possible in the future to enhance tolerance in other organisms, such as helping crops better survive drought conditions, says Dr Kamilari.

But although a whole host of findings have been published on tardigrades in recent years, ‘the reality is that we still don’t have that much information,’ Dr Kamilari said. For example, we lack enough tardigrade genomes (an overview of their full set of genetic instructions) and transcriptomes – a catalogue of the full range of molecules expressed by those genes.

In a project she leads called BIOSTASIS, she has been trying to map some of these fundamentals and then find out whether there’s a ‘signature’ molecular feature or set of features that enable this suspended animation under desiccation stress. She is examining, for example, which genes are turned ‘on’ and ‘off’ or have a different level of activity when tardigrades move in and out of this state.

‘Understanding the mechanisms of extreme desiccation tolerance can be of high impact for the natural and biomedical sciences.’

Dr Kamilari and her colleagues recently produced the first transcriptomes of one marine and one land-based tardigrade species they collected and analysed. They then compared these with known data from two other terrestrial tardigrade species and six other organisms, from yeast to humans, to see whether the moss piglets had unique features that gave clues to their drought-defying abilities.

Yet the picture was complex: although tardigrade species had some features in common, there seemed to be large variations too. This means that different types of tardigrades may have evolved different ways of adapting to stress, says Dr Kamilari.

Extra-puzzling was that the marine species, considered the ‘toughest’ of the four examined, seemed to lack expression of a number of key proteins thought to be tardigrade-specific and connected to surviving stress, such as cytosolic abundant heat soluble (CAHS) proteins.

This could therefore mean that ‘less is more’ for tardigrades, says Dr Kamilari, going against the line of thinking that ‘if you have more, then you have a larger arsenal to fight back’.

Certain mechanisms or series of mechanisms might also be more important than single genes or molecules, says Dr Kamilari – something she is now looking into further, along with collecting more information to boost the baseline data on tardigrades.

‘We haven’t found a unifying feature in our results,’ she said. ‘I think we’re a long way from finding the bottom line.’

The findings raise intriguing questions for evolution, too, in terms of whether desiccation survival – known as anhydrobiosis – was a pre-existing trait that certain organisms retained or that independently evolved in different lineages. Despite relatively few known species displaying the trait, it appears across the tree of life, said Dr Kamilari – including in plants, nematode worms, fungi, bacteria and microscopic aquatic animals known as rotifers.

Dr Xiaohan Li, a postdoctoral researcher in Dr Madan Babu’s group at the Medical Research Council Laboratory of Molecular Biology in Cambridge, UK, agrees there is still much to discover about tardigrades. ‘How they survive these stresses is still a mystery,’ he said.

In his own project, Desiccation Survival, he is using both computational and experimental analysis to home in on the CAHS proteins in tardigrades to find out how they protect cells from drying out. In the future, finding this out could help to replicate these abilities for other uses.

‘If we know what the properties are of some molecules that are important in this process, we might be able to find or design similar molecules to apply in humans and other material engineering,’ said Dr Li.

The importance of IDPs in organisms has increasingly come to light in recent years, with some estimates that a third of the proteome – or full complement of prioteins – in many organisms contains disordered sequences.

In extremely dry conditions, CAHS proteins in tardigrade cells transform from shapeless and flexible into a type of ‘bioglass’, which holds key proteins and molecules together until the animal is rehydrated.

‘We’re trying to understand why these proteins, even without stable structures, can function to protect molecules and tardigrades,’ said Dr Li. ‘Our knowledge of how they do this is still limited.’

As well as a computational analysis of the amino acid sequences that make up known CAHS proteins, he plans to carry out tests to see the effect of transferring these from tardigrades to yeast. In preliminary experiments, he was able to reproduce previous observations that this enhances yeast’s resistance to desiccation, but he wants to go further by finding out the extent of the similarity and whether new sequences can be found that aid drought survival.

The research could further enhance our knowledge of underlying cell stress processes and IDPs in general, which have been linked to a whole range of diseases, such as Alzheimer’s, cardiovascular disease, cancer and diabetes. ‘These proteins consist of a very important piece of the puzzle in terms of our understanding of human health and disease,’ said Dr Li.

But health is just one possibility for unravelling the secrets of tardigrades, which could help in a whole range of areas, says Dr Kamilari – including, for example, ‘green’ strategies like finding dry-storage alternatives to freezing.

‘Although it’s clichéd, I think there are infinite possibilities,’ she said. ‘If we understand the mechanisms of surviving desiccation, then we can address so many different issues.’