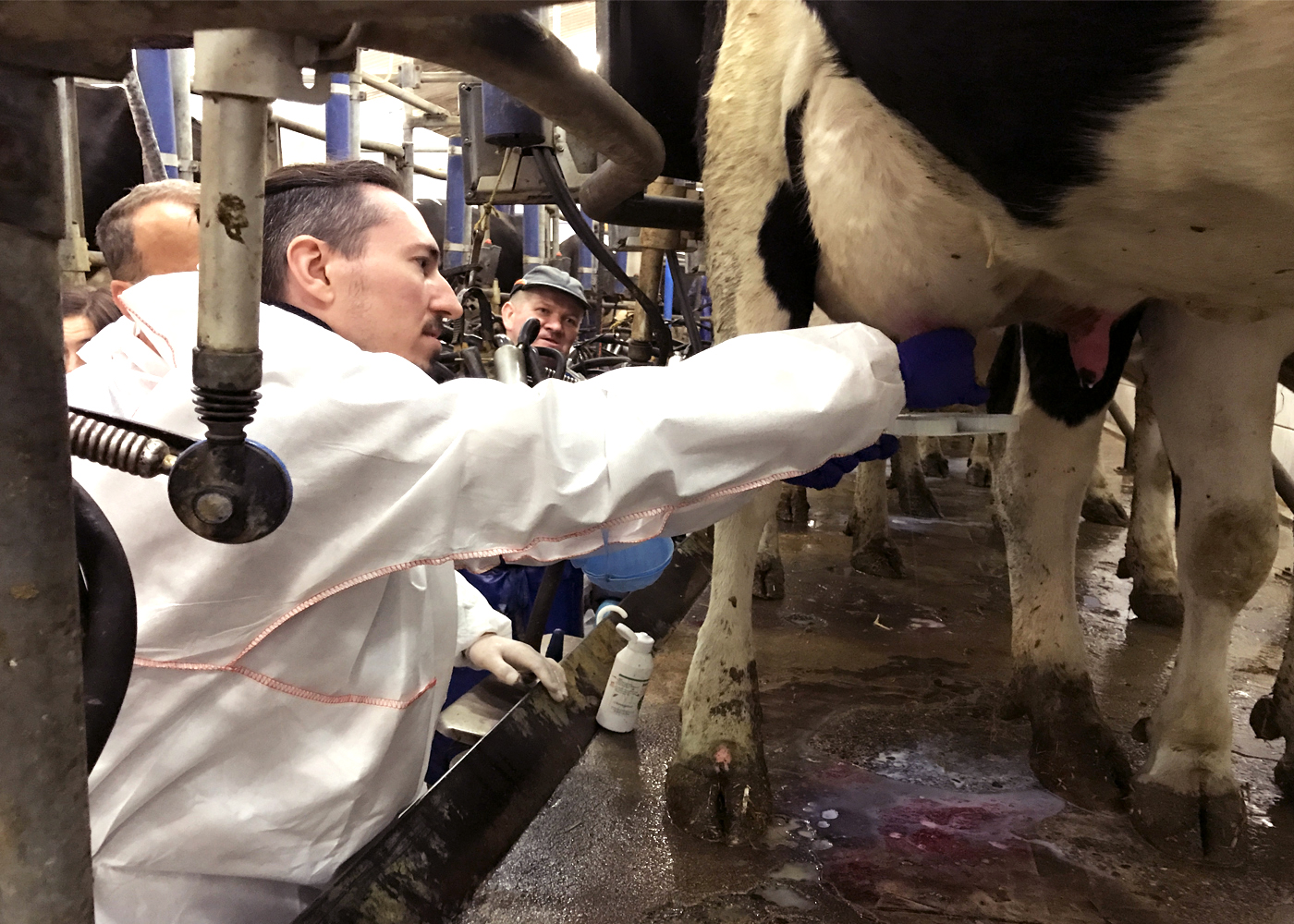 As the global antibiotic resistance crisis grows, chemical-based aerosol sprays and electrical signals to wake up the immune system are being developed to treat cow infections. These non-antibiotic therapies for livestock could also help to limit the spread of antibiotic resistance through the human food chain.

The animal sector, which uses drugs to boost animal growth as well as treat infection, is thought to account for around 80% of the consumption of medically important antibiotics in some countries.

In November 2018, the EU adopted regulations to ban the preventative use of antibiotics in animals and using antibiotics to promote growth and increase yield.

But finding alternative ways to treat disease in livestock that do not fuel antibiotic resistance is crucial for the future health of both animals and humans. These efforts could also help speed up the development of non-antibiotic treatments for people.

‘Animal health and human health go hand-in-hand,’ said Dr Ruairi Friel, CEO of biopharmaceutical company Westway Health in Galway, Ireland, which is developing a range of non-antibiotic technologies to treat animal and human diseases. ‘There are a lot of things we can do on the animal side and transfer and hopefully expedite elements in the human sphere.’

In a project called PanaMast, Westway has been developing a new non-antibiotic therapy that it hopes could be available for cows by 2021 or 2022, pending European regulatory approval.

Dr Friel says evidence so far is that the technology looks promising for application on a wider scale. ‘We think it’s a great platform as a broad antimicrobial therapy, whether it be for animal or human health,’ he said.

An advantage of going down the livestock route first is that it’s far quicker and less costly to get approvals for use in the dairy industry, says Dr Friel – and if the general technique can be shown to work, it could then speed up development of alternatives to antibiotics for humans.

PanaMast’s focus has been on creating what it claims would be the first non-antibiotic medicine for bovine mastitis – a true scourge of dairy farming caused by a variety of sources including bacteria that leads to inflammation of cows’ mammary glands and udders. Some estimates in the UK suggest herds see 40 or more cases annually per hundred cows, lowering milk production and leading to culling.

‘There are a lot of things we can do on the animal side and transfer and hopefully expedite elements in the human sphere.’

PanaMast uses a method developed by Westway called long-acting reactive species (LARS). This technique, which combines two medically approved, well-established chemicals into a ‘reactive oxygen species’ that kills the bacteria, can be administered in a number of ways, including via injection or aerosol. Dr Friel estimates that the technique could save farmers around €150 per mastitis case.

‘In some of the early trials, we tested it on cows that (were) on the way to the abattoir. All the treatments previously used on them just weren’t working and the farmer had given up on them,’ he said. ‘But after our treatment, we’d follow up at these farms one or two years later and the cow would still be in the herd, still producing large volumes of milk.’

Part of the reason for its high hit rate, says Dr Friel, is that the medicine targets a large number of locations on the bacteria themselves – about six to eight – compared with often just a single site for antibiotic treatments. He adds that the risk of mutation is lowered by targeting fundamental parts of the bacteria’s physiology, such as protein bonds.

Dr Friel’s team has trialled the method on multiple bacteria, including antibiotic-resistant Methicillin-resistant Staphylococcus aureus (MRSA), and has found it to work against all of them so far without inducing either resistance to the treatment or cross-resistance to other drugs as a side-effect. Nor does it seem to negatively affect milk, whereas treatment with antibiotics can hold up sales for over a week to prevent residues entering the food chain.

On top of all that, PanaMast believes its method is much more effective than current treatments, reporting a cure rate of 70% in trials for mastitis caused by Staphylococcus aureus, compared to 15% or less with antibiotics – though Dr Friel says larger-scale studies are needed to substantiate the results.

A different approach to treating mastitis that cuts out medicine altogether involves using electrical signals to induce the cow’s immune system to destroy the bacteria.

The technology, a decade and a half in the making and currently being trialled on a limited basis, was created by the Israel-based medical technology company Prise Systems and further developed in a project called HealMastitis.

The technique involves computer analysis on the mastitis pathogens present on a farm. Pathogens, like any living organism, have a unique set of electrical signals or an ‘electrical signature,’ according to Aharon Futterman, vice president of research and development at Prise Systems. Their technology is able to recognise this signature.

The cows’ drinking water is then charged with the same electrical signature, activating the animals’ immune system to recognise and fight these pathogens. The team would not reveal exactly how the technology works as it plans to apply for a patent.

Testing its technology on an Israeli farm, the team achieved an 80% success rate, healing 39 of 49 cows, says Inna Pekel, the project’s coordinator and CEO at Prise Systems.

‘We think our system will allow us to start treatment at an earlier stage of the disease and prevent it from reaching clinical stage,’ she said.

She added that the method, which she views as potentially ‘revolutionary’ for treating livestock diseases, has succeeded in achieving positive results within two or three days while not appearing to have harmful side-effects or affect milk quality or output.

Futterman says the system’s technology is usable now and adheres to European regulations. The aim is to test it in several European locations first to make sure it works well on a wider scale. The team hopes it could be ready within about two years.

HealMastitis is also seeking to secure extra funding so it can scale up the system to make it commercially viable. It requires a more complex computer system with added communication and location capabilities to detect where systems are installed – necessary because pathogens vary between countries, says Futterman.

Dr Volker Krömker, a researcher in cattle health at the University of Copenhagen in Denmark, says the search for new therapies makes sense and can bring more evidence to the use of antibiotics in general, with ‘the whole topic fundamentally very important for humankind’.

However, he believes other measures could be more urgent in the short term than developing specific technologies and products.

‘In my opinion, greater effects in a shorter time can be achieved through clear therapy guidelines (for prevention and dealing with the disease) and improved diagnostics,’ said Dr Krömker. ‘Furthermore, a better understanding of infection processes and the resulting prognosis is crucial… In the field of mastitis, a joint agreement to limit antibiotic agents could also be helpful.’

While non-antibiotic cures and electrical signals show promise, developing a range of techniques could take time. ‘It hasn’t happened on a wider scale yet for the simple reason that it’s difficult to do,’ said Dr Friel. ‘Lots of other people are looking into this, but it’s a tough nut to crack.’